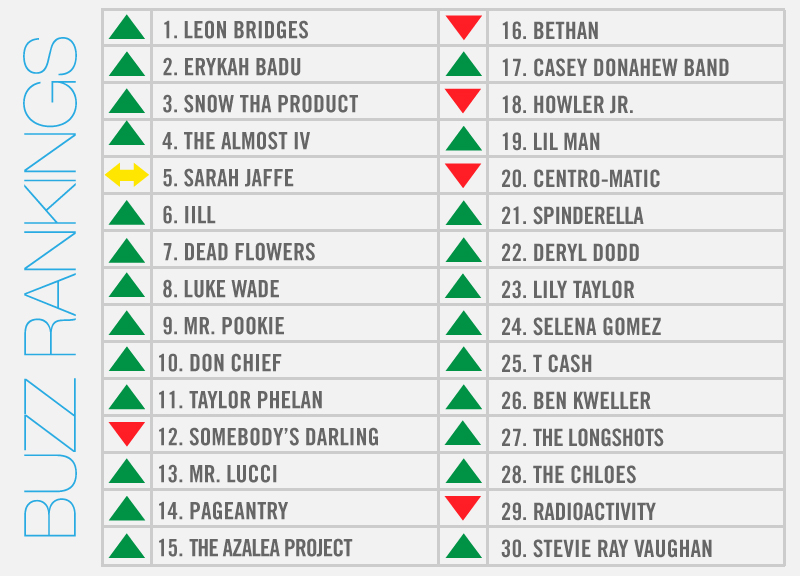 This Week, Leon Bridges Proved Himself The Better Man.

For some time now — since right around the time when Dallas outfit The Texas Gentlemen began backing Bridges at many of his live offerings — there's been a palpable buzz surrounding throwback soul man Leon Bridges in the Fort Worth underground.

Then a couple White Denim members decided to take Bridges under their wing, helping the musician lay down his Sam Cooke-inspired jams in the studio. And it didn't take long for the first of those cuts to find their way onto Gorilla vs Bear, which this week gave Bridges his biggest cosign yet.

In other words, it won't be long until the rest of the world starts to take notice as well.

For the time being, though, the extra attention did help Bridges land his first No. 1 spot in our weekly, local music power rankings.

It's all the more impressive considering the wealth of experience from the performers just behind Bridges in this week's list. For instance? Erykah Badu, who came in at No. 2 after busking anonymously in New York City. A video of her performance went viral — mostly because the much-lauded musician earned less than $4 during her performance stretch.

Then there were locally based alt-country acts the Casey Donahew Band and Deryl Dodd, which had some pretty high-profile performances of their own this past weekend. The former headlined the first-ever Red River Music Festival, which went down in the Cotton Bowl following the Texas-OU game, while the latter appeared on the under card.

Speaking of high profile, a number of this week's list-makers appeared on television and film. Those include: Ben Kweller and Selena Gomez, whose new movie Rudderless opens this weekend; Snow tha Product, who performed in the cypher at this week's BET Awards; Luke Wade, Taylor Phelan and Craig Wayne Boyd, who each successfully made it to the Knockout Round in the current season of The Voice with their performances earlier this week; and Don Chief, Mr. Lucci, Lil Man and T Cash, who are among the rappers set to appear in this upcoming film.

Elsewhere: Sarah Jaffe and Somebody's Darling each released new music videos; Pageantry, The Longshots, The Chloes and Somebody's Darling announced that they're headed to perform at the CMJ Music Marathon; Mr. Pookie celebrated the 15th anniversary of his classic Tha Rippla album; Dead Flowers geared up for to release its sophomore album this weekend; and The Almost IV instantly became one of the most interesting locally-tied bands to form in years.