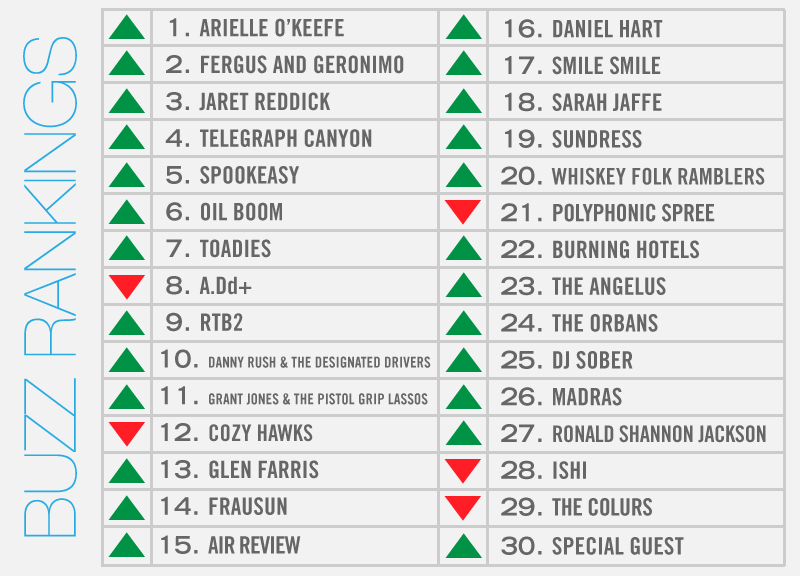 It's A Whole New World For Arielle O'Keefe.

Before this week, almost nobody knew the name Arielle O'Keefe. Well, other than the folks that somehow stumbled onto her YouTube page where she had posted dozens of videos of herself singing songs like Beyonce's “1+1” or Outkast's “Hey Ya.”

Oh, and the few thousand people she got to perform in front of when she got the chance to open for Rod Stewart at Caesar's Palace earlier this year.

The 21-year-old Allen resident was the focus of the debut episode, which followed her as she worked with vocal coaches and musicians to prepare for her big Vegas coming-out party.

Needless to say, the number of people who are aware of O'Keefe's existence has grown exponentially this week, which is reflected in our buzz rankings.

Meanwhile, Denton ex-pats Fergus & Geronimo are buzzing locally once again after being announced as openers to 35 Denton's Hot Wet Mess event in September.

DJ Sober and RTB2, who were also announced as local support to that bill caught some buzz this week as well.

The latter of those two acts hasn't released a full-length LP of new material since 2007's The Both of It and also got people chattering online earlier this week after pictures of Ryan Thomas Becker and Grady Sandlin appeared on the band's social media sites holding up copies of a finished followup LP.

In other news, a week after Jaret Reddick was announced as the new voice of Chuck E. Cheese, he continues to buzz thanks to his gig as the voice of the pizza chain's mouse mascot. He also was announced as the opener to Smile Smile's album release show on August 11 at the Granada Theater. The announcement of that show, along with the fact that attendees will receive a free copy of the group's sophomore LP, Marry a Stranger, helped that band also reappear on the list after a several week absence.

Lastly, The Cush, Whiskey Folk Ramblers, Air Review, The Orbans, Telegraph Canyon and Burning Hotels got a boost after being announced as members of the initial lineup to this year's Fort Worth Music Festival.