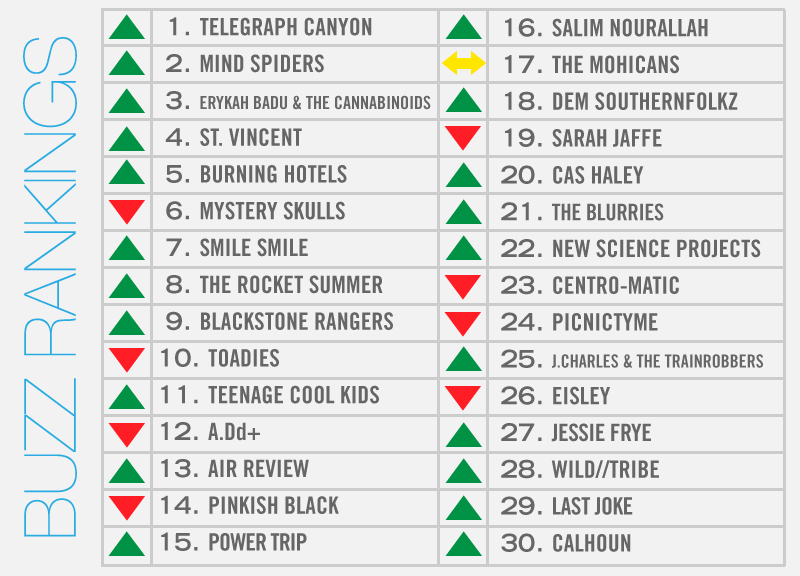 This Week, Telegraph Canyon Is A Cut Above.

In a bit of a surprising turn, Fort Worth's Telegraph Canyon top this week's rankings — seemingly solely due to their upcoming appearance on the main stage of tomorrow night's KXT Summer Cut concert at Gexa Energy Pavilion. Even more surprising? They came in a whole three spots higher than the sometimes-local St. Vincent, who has a better slot on the same bill. Either way, Telegraph hinted on their Facebook page this week that they might be debuting some new tunes during that show. So there's that.

Meanwhile, Summer Cut headliners the Flaming Lips helped Erykah Badu to make national headlines again this week when frontman Wayne Coyne tweeted a series of NSFW pics of the Neo-soul Queen while the pair were shooting a video for their Heady Fwends track, “The First Time Ever I Saw Your Face.” The “Window Seat” songstress isn't a stranger to controversy or to appearing nude in public, so we're betting she's taking the whole thing in stride.

Runners up Mind Spiders play main support to tomorrow night's Best Coast show at Granada Theater. Despite pretty heavy and consistent praise from such notable outlets as Pitchfork, the local punk outfit definitely doesn't over saturate the market by playing a ton of shows. Any chance to see the band is a treat, especially on a big room like the one the Granada boasts. Plus, it's just a top-notch bill. Similarly, Teenage Cool Kids, whose frontman Andrew Savage now resides in New York, made a pretty rare appearance of their own last weekend in Denton.

In other news, several performers from last weekend's Homegrown Music and Art Fest are still getting some residual buzz this week, including The Mohicans, Eisley and Centro-matic. As are The Burning Hotels, who played the official Homegrown after-party at La Grange along with Mystery Skulls, who played both Homegrown events.

The Rocket Summer and Blackstone Rangers are both buzzing thanks to anticipated upcoming releases and the announcements of release shows to coincide with those efforts. Meanwhile, Dallas hardcore band Power Trip announced earlier today that their next several releases would come out under the Southern Lord imprint after signing a deal with the label.

Lastly, perennial buzz machine A.Dd+, who have appeared in the rankings every week since its inception, are still riding high off of the release of a collaborative track with Picnictyme and their inclusion on the wildly anticipated Gorilla vs. Bear Fest II.