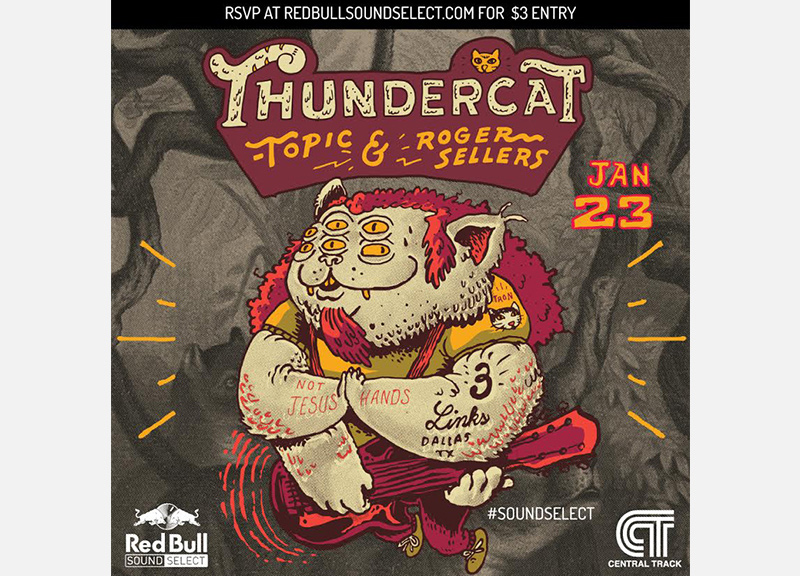 Red Bull Sound Select's upcoming #Yearender bash here in Dallas — a two-night, back-to-back, Parade of Flesh-curated series of shows featuring the likes of Anamanaguchi, Mystery Skulls, The Pains of Being Pure at Heart and more — looks to be a hell of a time as it takes over Deep Ellum in less than two weeks' time. But, it's worth noting, these shows are only meant to put a feather into the cap of Sound Select' 2014 run; the series as a whole, which kicked off a year and a half ago, will indeed be continuing on into 2015.

And when it does, it's going to do so on an especially mind-bending note: On January 23 at Three Links, we here at Central Track will be once more taking up the series' curatorial torch by throwing a show featuring Los Angeles' Thundercat, Austin's Roger Sellers and Dallas' own -topic.

We're especially stoked about Thundercat's involvement, too. Why? Because the multi-instrumentalist, genre-bending performer is crazy — and in all the right ways. Check out this music video he released earlier this year, as directed by comedian Eric Andre.

Stereogum called the video, which was produced for all of $5,000 (and, uh, it kind of shows), “one of the weirdest ways you spend three minutes all year.” More nuts? It's just one of-the-wall projects with which the sometime bassist for Erykah Badu has been involved of late; Thundercat, who performs as the bass player in the thrash metal band Suicidal Tendencies as well, also joined forces with his frequent collaborator Flying Lotus to help record tracks for that artist's Cartoon Network-approved Captain Murphy alter ego

But, truly, it's with his own musical output — a style that blends R&B and pyschedelia with funk and electronic embellishments — where Thundercat shines brightest.

And with support on this January 23 showcase — Thundercat's debut headlining performance in town — from the Austin-based psychedelic soundscape artist Roger Sellers and Dallas' own inventive hip-hop wunderkind -topic, it's safe to say that we're all in store for a memorable evening.

Might as well sign up to check it all out right now, then. You know the drill with these shows: They're $3 to attend with an advanced RSVP dropped at the Sound Select site, and $10 to attend at the door without an RSVP. To RSVP in advance does not guarantee admission, just the lower ticket price; entrance into this event, as with all Sound Select showcases in Dallas, will be handled on a first-come, first-served basis.