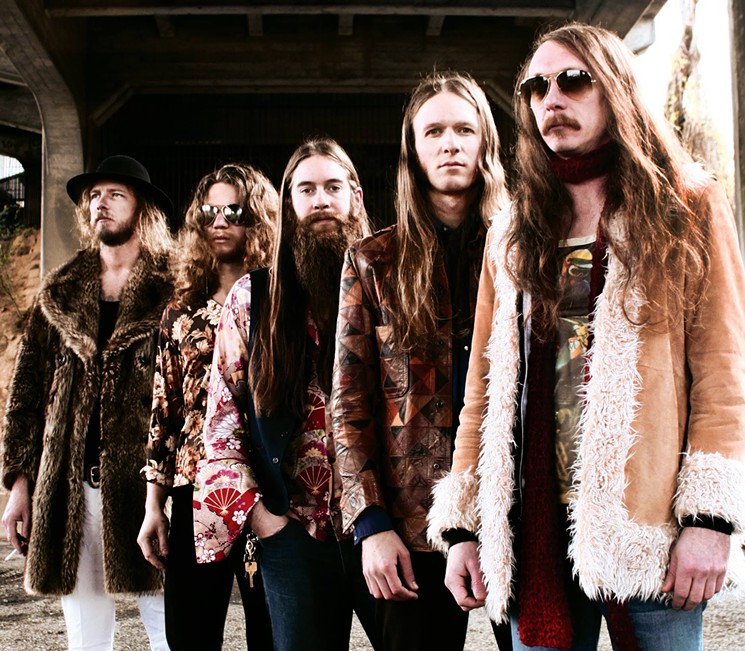 Days after the Dallas Observer and D Magazine each wrote pieces about Portland rockers Black Pussy and their intentionally offensive name — and months after Houston Press called them the worst band ever — the band has been dropped from this year’s 35 Denton lineup.

It’s a curious and reactive move to be sure, and one that comes only days after 35 Denton marketing director Andy Odom defended the band’s booking. Earlier this week, Odom told the Observer, “Local bands like Black James Franco have performed, yet they are neither black nor James Franco. None of these caused a problem.”

And yet, late Thursday afternoon, 35 Denton issued an official press release dropping Black Pussy from its 2016 lineup. States that release:

Today, 35 Denton Music Festival decided to remove the band Black Pussy from our 2016 lineup. We are confident in our booking team and the selections they have made. However, after learning more about this band and receiving feedback from our community, we do not feel they are the right fit for our festival, our town, or our culture.

Our first priority is providing a safe and fun fest environment where all feel welcome. We apologize to anyone we offended or concerned by the initial inclusion of this band in our lineup and want to be clear in stating that we do not support racism or sexism in any form.

Of course, this is not the first time this year that a show from a controversial act has been canned in the wake of some Internet outrage. Earlier this month, the Texas Theatre cancelled a scheduled performance from Non after the theater was made aware of its frontman Boyd Rice’s white supremacist, neo-Nazi-sympathizing ways.

The differences in that case, however, lay in the fact that the Texas Theatre relied on an outside booker for that show, that the band didn’t name itself after its controversial beliefs and that the theatre’s owners cancelled the performance as soon as they were made aware.

35 Denton can’t really use any of those excuses. For one thing, 35 Denton books its own bands. For another, Black Pussy isn’t some new band or even new to the area, having played a number of shows at Fort Worth venues Lola’s and The Rail Club in recent years without incident or outrage. Also, the controversy surrounding the name isn’t a secret either, considering that the band was at the focus of a fairly well-publicized petition last March that asked it to change it name. (A year later, that petition has only 1,941 signatures.)

Lamest of all: 35 Denton’s booking crew knew full well the band’s name was Black Pussy — and that’s where the controversy lies, in the name — when it decided to add the band to this year’s bill. Organizers shouldn’t have booked the band in the first place if it found the name offensive (which it is). Despite their statement, there’s not really any new information to be gleaned that these bookers didn’t have when they initially offered the band a spot on their lineup — none, at least, beyond the fact that some people made a stink about it. Moreover: Pulling the plug after a purposely controversial band proves itself predictably controversial is just kind of a weak move.

But it’s also one that won’t stop North Texas audiences from catching the band if it so chooses. Black Pussy is also booked to play Fuzzed Out Fest at Lola’s Saloon in Fort Worth on March 19 — and that’s a booking that club says it has no plans to cancel.

To each their own, I guess.