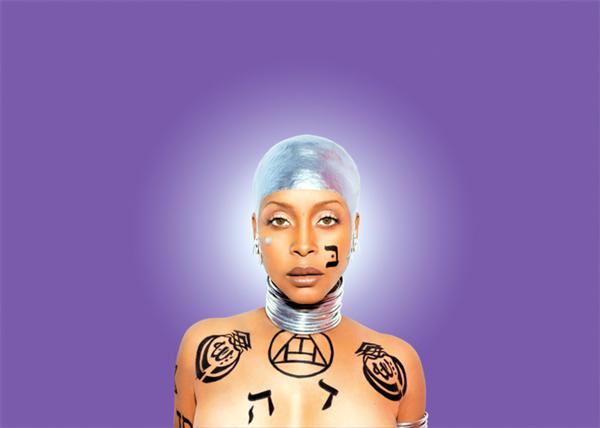 For a few weeks now, Dallas native Erykah Badu and her band have been on the road, bringing their unique brand of futuristic neo-soul to audiences stateside and abroad. And, for the the most part, the whole tour has gone off without a hitch — until today, of course.

This morning, the Associated Press reports that the Muslim-majority Malaysian government has banned a planned Wednesday night concert from Badu in Kuala Lumpur from taking place because of temporary tattoos depicting the word “Allah” appearing on the singer's bare shoulders in a publicity photo used for her 2010 New Amerykah, Pt. Two: Return of the Ankh release. In a released statement, Malaysian information minister Rais Yatim deems the tattoos “an insult to Islam and a very serious offense,” and adds that these images of Badu have “triggered public criticism that could jeopardize national security and cause a negative impact to the government's image.”

Badu may be no stranger to controversy herself, but neither is the Malaysia government.

In 2009, the government held up a planned concert from Beyonce because of her revealing on-stage get-ups. In 2010, the government did the same with an Adam Lambert concert, expressing concerns over his “lewd” and “gay” live performances.

Perhaps sick of this kind of treatment of visiting performers, a number of Malaysian celebrities have already begun releasing their own statements in defense of Badu — via Twitter, of course.

Encouraged by this outpouring of support, Badu and her camp, who have been in Malaysia for the past few days to promote their show, are remaining in the country as tourists for now, hoping that the government will change its mind and allow the show to go on.

“Right now, the promoter is working through this,” Paul Levatino, general manager of Badu's all-encompassing Badu World entity, tells Central Track this morning from an Internet connection in Kuala Lumpur. “We hope this will be resolved tomorrow so the show can go on.”

Currently, however, Levatino says he and the rest of the Badu crew are being forced to simply sit tight and wait.

“It's not the people that are upset,” Levatino says, somewhat frustrated but also a little encouraged by what he's heard of the situation of late. “Apparently the government likes to make an issue about these things.”

Update at 1:46 a.m. on February 29, 2011: According to Time Out Kuala Lumpur's Twitter feed, the Malaysia show has been officially canceled and the Badu camp will now head to Indonesia to continue the rest of their tour.