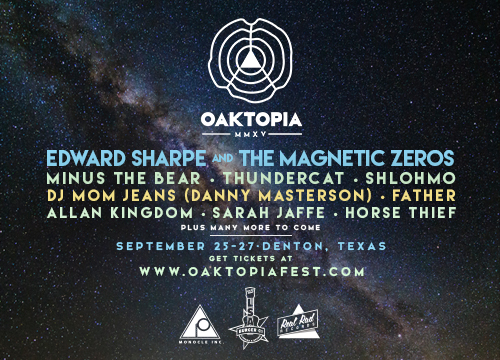 Since its humble beginnings in 2013, Denton's annual Oaktopia Festival has demanded to be taken seriously, to be seen as more than the 35 Denton off-year stopgap that so many first saw it as.

And, this year, the Monocle, Inc. team behind the music fest is leaving no doubt. Indeed, if the just-this-morning-released initial roster of acts playing the festival is any indication, the third-year deal is going to be pretty massive.

Headlining this year's three-day, Downtown Denton-hosted festival is the borderline excessively charming indie rock collective Edward Sharpe & The Magnetic Zeros, an act that represents not just a massive coup for Oaktopia, but a bit a broadening of the festival's mostly hip-hop- and electronic-oriented beginnings. Following suit in this regard are Minus The Bear and Horse Thief, favored rock acts that'll also perform at the September 25, 26 and 27 proceedings.

Sticking closer to the festival's sonic origins, Oaktopia '15 will also see performances from Kendrick Lamar's secret weapon and our old pal Thundercat, plus electronic wizard Shlohmo and local electro-pop darling Sarah Jaffe. Fast-rising young rappers Father and Allan Kingdom will also perform as part of a weekend-long, Central Track-presented (!) festival showcase going down at Hailey's Club. (More details on that in due time.)

More performers will be announced soon, some as early as next week. Tickets, meanwhile, are already on sale right here, starting at $57 for a three-day pass or $99 for three-day VIP access. Ticket prices will rise as the event nears.