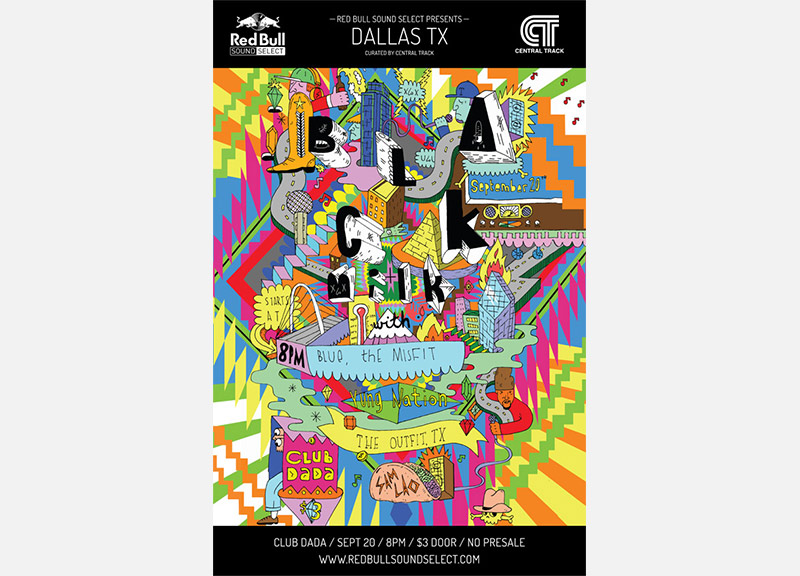 To wit: We've mentioned it a few times here and there before, but we're now ready to launch an all-out assault for the September edition of Dallas' Red Bull Sound Select series, for which we've curated a bill featuring performances from Black Milk; Yung Nation; Blue, The Mifist (of Brain Gang); The Outfit, TX; and Sam Lao. Also awesome: DJ Sober will be on hand, rocking the decks at this throwdown, too.

The show's set to take place Friday, September 20, at Club Dada, and entry into the affair will cost you a mere three bucks. As with all Sound Select shows moving forward (unless otherwise noted), there will be no advance ticket pre-sales for this show; admission will be granted on a first-come, first-served basis at the venue.

Granted, we're the ones responsible for bringing this bill together, but we're especially excited about it nonetheless. Here's why:

â€¢ Black Milk, our headliner, is what you might call “a total badass.” The Detroit native and recent Dallas transplant has produced for everyone from Pharoahe Monch and Kidz in the Hall to Danny Brown and Slum Village, and his own solo efforts are even more critically lauded. 2010's Album of the Year lived up to its own lofty billing and this show in particular will serve as the kickoff for his new No Poison No Paradise Album, which is set for a mid-October release on Black's own new Computer Ugly label. At this show — his first in town since becoming a Dallasite — Black Milk will be backed by his flawless Nat Turner backing band. Check out No Poison No Paradise's second single, “Perfect on Puritan Ave.” below:

â€¢ Blue, The Misfit, leader of Dallas' ever-rowdy Brain Gang collective, will serve as the night's main support — and, from what we hear, he'll be debuting tracks from his own upcoming release at this affair. Check out his “Party On (Remix)” from 2011's Numb EPP below:

â€¢ Yung Nation, arguably the hottest act in the city at the moment, will turn things up in the middle of our bill and provide this night an absurd amount of fire thanks to the townsome's own updated, ridiculously hyped up take on the D-Town Boogie. Check out “AWDIB (Ball)” below.

â€¢ The Outfit, TX — formerly the best Dallas rap group residing in Houston — will meanwhile look to vibe us all into trill oblivion during their set; the trio, now back in Dallas for the foreseeable future, is still supporting 2012's Starships & Rockets: Cooly Fooly Space Age Funk, one of the most unfortunately overlooked rap albums of the last few years. Check out “Private Dancer” below:

Long story short: It's gonna be a time, y'all. Peep the flier designed by the great Kyle Confehr below. Then head here to RSVP and stay up to date on all the latest developments on this showcase. See you there!