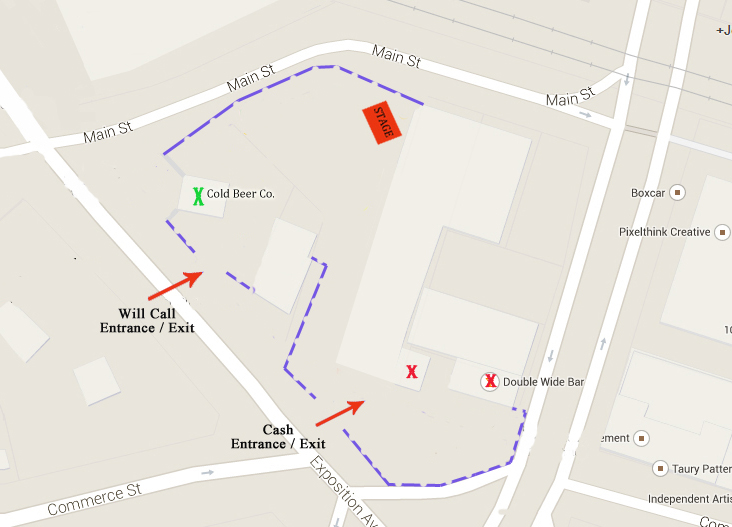 For Its 11th Anniversary, The Double Wide's Bringing In High on Fire, Roky Erickson and More.

The Double Wide went pretty big last year to celebrate its 10th anniversary under current ownership. I mean, they did bring The Bronx to town for a one-off to headline that gig.

Makes sense: The 10-year milestone is always a big one. Somehow, though, the Double Wide is treating its 11th anniversary as an even bigger deal. Huge, even.

“We're heading into our second decade,” says Double Wide marketing coordinator Jessica Luther. “We want to kick it off right.”

And how: For its 11-year bash, which will go down on Saturday, October 4, the Double Wide is throwing an all-out block party that will encompass the entire space between its doors and the freshly opened Cold Beer Company's. To get a grasp on just how much space this is, check out this map that the Double Wide staff passed our way:

The bar's bringing in some big names to help fill all that space, too: In addition to performances at the Double Wide's own indoor stage from the Riverboat Gamblers (10 p.m.) and The Derailers (8 p.m.), the venue will also erect a temporary, outdoor, 24-by-20-foot stage to play host to showcases from psych icon Roky Erickson (9 p.m.) and Oakland-sprung stoner metal heroes High on Fire (11 p.m.).

Additionally, the Sailor Jerry-sponsored party, which is being deemed “11 Twisted Years at Double Wide,” will also include an unveiling of a new tornado sculpture to be set above the venue's main bar. But it's more than just about the Double Wide, too.

“This is definitely a welcoming party for Cold Beer Company as much as it is an anniversary for Double Wide,” Luther says. “Without their help, we wouldn't be able to pull this off.”

Doors will open at 5 p.m. The first band goes on at 8. Advance tickets can be bought for $25 right here, right now, or in person at the Double Wide and Single Wide starting next week. Tickets at the door will run $28.