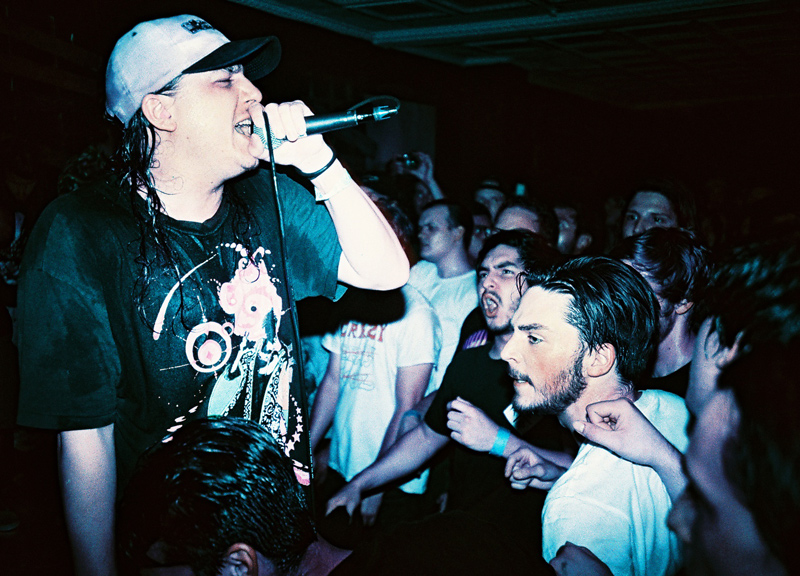 Power Trip Frontman Riley Gale Tells Us What He Misses Most About Dallas.

Not gonna lie: Our hearts were broken a little bit back when Power Trip frontman Riley Gale announced a little over a year ago that he was moving away from Dallas to pursue new opportunities in Chicago — if only because it meant that seeing the hardcore band perform live, in all its visceral glory, would be a less-regular occurrence around town. There was a silver lining with that news, though: Much of the rest of the band was staying put, meaning Power Trip would still be based for the most part in North Texas and local shows from the band, while not quite as frequent, were still very much in play. With Gale back in town for a visit, that much comes to pass again this week, as the band’s set to perform at Sons of Hermann Hall on Monday night. In advance of that show, we asked the frontman if he’d write something for us — something maybe along these lines — in which he’d reminisce about what he misses most about Dallas since moving away, and what he’s seen change in the city while watching from afar. He was kind enough to oblige. Here’s his piece.

Around the age of 25, I (finally) graduated my lazy ass from the University of North Texas and got that common twentysomething itch to move out of Dallas.

There was nothing inherently wrong with Dallas in my mind, and I had no big-picture goal to speak of. I just got the notion in my head that I didn’t want to waste my “youth” living in one place the whole time, and 30 was right there on the horizon.

I was raised in Garland, had lived in Denton for nearly six years and kicked around places in Plano, Richardson and East Dallas for a few years after that. I’ve lived in or around Dallas my entire life.

I quickly ditched the idea of moving to Austin or Houston, though. I wanted out of Texas entirely. I wanted something different.

And I’d previously had some tastes of that. I’m lucky enough to be in a band that doesn’t suck too bad, so we get to tour the country — although, I admit, touring often means only seeing a few city blocks of each city or town. Still, I had a good idea of where I wanted to go. As the cliche goes, I was “too lazy for New York and too ugly for LA,” so I plotted my escape to Chicago in April of 2014.

(Full disclosure: A big factor in why I chose Chicago was a woman, and a wonderful woman at that. Chicago is a killer city. You can take that figuratively and literally, but if you call it “Chiraq” or “Chiberia” in a non-ironic or mocking tone around me, I will have a greatly lowered opinion of your personal character.)

I’ve enjoyed the change of pace. Chicago is a place that isn’t too cramped. And, generally speaking, the people are surprisingly welcoming. It’s a culturally broad city with every subculture or niche interest represented. It also has just enough grit for me to enjoy the city life, and boasts enough of an insane crime rate and rap scene for me to have some sick street cred back here at home whenever I visit. It’s a city I’m having a great time in.

That said, after just a year away, I already know Texas is where I will retire and be buried. Power Trip still centrally located in Dallas-Fort Worth, which is the main reason why I’ve been back and forth about a dozen times since moving. But it’s not the only reason.

I’ve noticed, too, that there are some things I really miss about my hometown. In no particular order, here they are.

Backyard, Lawns and Porches. I miss hanging out just a little bit closer to nature. Put me on a patio or a porch with some dogs running around a yard and a whiskey drink in my hand, and I’m content for hours. I miss the grass between my bare feet. And I’ll take the cicadas chirping over city noise any day. I actually miss the sound of ’em. Really. Stoop chillin’ in the city can be cool, but where I live in Humboldt Park isn’t ideal for it unless you’re a drug dealer. But, more than that, it can’t beat kicking back outside and watching a Texas sunset in a motherfuckin’ hammock with some Hubert’s lemonade, you feel me?

Two Sisters. This is the place I must eat when visiting Dallas. Two Sisters will cater my funeral just to finally show all you suckers who didn’t listen to me what you’ve been missing. It’s a catering joint with a storefront only open for lunch, but every day is something new, fresh and, I guarantee you, goddamned delicious. Two Sisters is the gospel, and every friend I’ve taken there becomes a believer. I salivate over the daily menu emails I still receive and still voluntarily open. I have a doomsday-prepper supply of their instant spiced iced tea mix back at my place in Chicago.

Family/Friends. This is so obvious, but so important. My family and all my closest friends who have become like family — they’re all still here. The older we get, the tighter we become, and it’s been a beautiful thing. I’m very lucky to have such a strong family environment in Dallas. Coming home to my family is the best because it turns into an impromptu cookout with friends every. single. time. You should really come to a Gale family cookout sometime. I’ll invite you.

Swimming. Call me a wuss, a wimp, an L-7 weenie. I don’t care. But, the fact is, the water doesn’t get warm enough in Chicago for me to go swimming. Lake Michigan is always frigid, you have to drive hours outside the city to find any cool swimming holes and the pools, especially the public ones, just aren’t that cool. I’m not a big swimmer, really, but when you step outside and catch a nice warm hug from the humidity, it’s a nice option to have.

Shiner Bock. It’s still my beer of choice. And they sell it in Chicago, but it’s way overpriced. I also have to go to some bullshit hip beer store just to get it. I miss being able to go to Mr. G’s and grab a killer sandwich and a 12 pack of Family Reunion.

Deep Ellum/East Dallas. The parts of town I spent most of my youth in were Deep Ellum and East Dallas. Before I moved away, I lived right around the corner from Strangeways, and I loved having that place as my local watering hole. It didn’t hurt, either, that the gas station tacos across the street were my favorite secret in Dallas. Also, for six months, I lived in a place called Tapatio Studios which was an insane adult party/clubhouse that sometimes had shows but looked more like the Foot Clan hangout from the original TMNT movie. I miss those days — and earlier ones, too. Deep Ellum was my secret playground when I could first venture off on my own with my mom’s minivan. I spent weekends at shows at Deep Ellum Live, Gypsy Tea Room, the old Galaxy Club, RBC and wherever else I could get in. Then I’d get some Sol’s Tacos or late night slices at Zini’s before I realized that stuff is pizza garbaggio. I got to do and see so much cool shit before they nuked the whole area. I’m glad it’s made a comeback, even though some parts of it are too upscale for my tastes. But it’s still a fun area to be in, and the food still kicks some serious ass. Dada and Three Links seem to keep the older spirit of Deep Ellum alive. I haven’t been to Off the Record yet, but I hear great things.

Denton. It’s sadly looking more and more like Austin every time I visit, but I still can’t help but love this dumb little town. My most beloved spots — places like Rubber Gloves, Mr. Chopsticks and Cool Beans — are mostly still as great as I remember them. Apparently, the house I lived in for three years — dubbed “Bongress” under my tenure — is still around too, with some new punks living in it. It’s been a punk house for nearly 10 years now, which is an awesome legacy to leave for a small town. I miss back when Lion’s Den had some great shows, too. The people do seem different now, though. It is one thing not to recognize anyone because mostly everyone got the hell out and graduated school, but I saw more than a few people that looked like they missed their exit towards Southlake the last time I visited. I even saw one couple that looked like they drove about 1,500 miles too far past the Jersey Shore. Long live The Tomato, I guess.

Arlington. Yeah, I said it. Arlington. Agg-town. Club A-OK. I really only miss two things there — games at the Ballpark, and then getting stupendously drunk at Caves or Sunshine for less than $20 — but I do miss them.

The Nostalgia. I’ve realized while writing this that the things I miss most about Dallas are the things that already came and went. Red Blood Club, Across The Street Bar, Panhandle House, XDM, Competition Music, Tapatio Studios: These are places where creativity flourished as I started becoming an adult. At the same time, my friends and I were putting effort into making DFW one of the best DIY scenes in the country. And I think we achieved that goal. The scene here still kicks so much ass, and I’m proud of the foundation that so many bands and people have left behind. Ultimately, I miss sitting around with friends over beers and blunts, rehashing the same stories we’ve told a dozen times, the ones that still make us laugh and that I could never put in print. I still have the original metal signage from Red Blood Club hanging in my apartment. I guess, overall, I miss Dallas because I was lucky enough to build a personal history here that meant something to me. I’m lucky enough, too, to have gone somewhere else and realized how to love both the present and the past. Well, for the most part. It’s nice to love what you leave behind, but it’s even better to still have it there for you when you need it.

Being Cool, I Guess? This is admittedly entirely a complete sense of entitlement, so I’m only really including it as an honorable mention. But I do for sure miss having paid my dues in a scene and knowing somebody at every venue or event and not having to pay cover for most shows. I’m not as heavily involved in the music scene in Chicago as I was in Dallas, and it has been a bummer for my wallet. Poor, poor me.

Five Dallas-Fort Worth Bands I Miss Getting To See All The Time.
• True Widow.
• Wiccans. Or any young local hardcore punk band, really.
• Stymie.
• Cleric.
• The Marked Men. All of their offshoots, too.