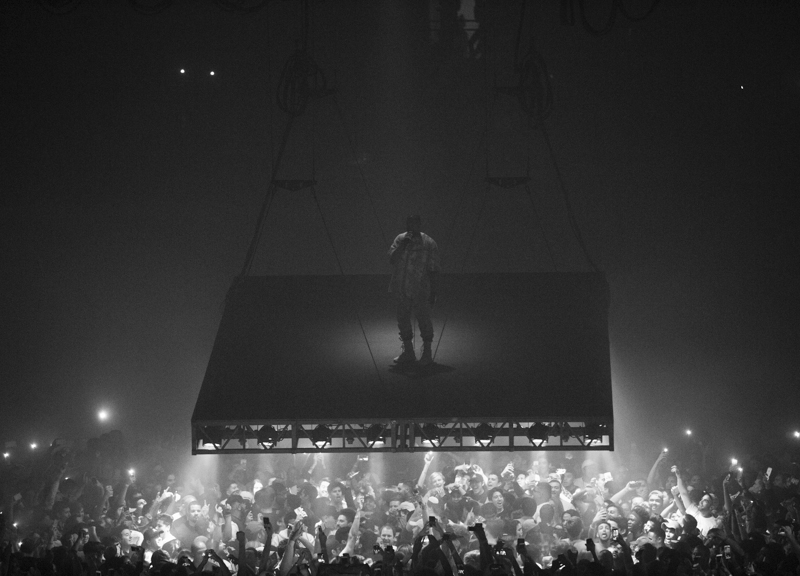 This wasn’t supposed to be my first time to see Kanye West.

So seeing him Thursday night at the American Airlines Center was a dream come true, and it was worth the wait.

With a set as extravagant as anything U2 did on their 360 tour, Kanye literally floated above the audience the entire show. He stood atop a lighting rig that moved from one end of the arena and back, pausing throughout to make sure all the general admission ticketholders below him got to bask in his glory.

But he’s a benevolent one. Though he didn’t stop to rant much on this night, he did use the few breaks in his 30-song setlist to encourage those in the audience – if not a all-out, it was damn cose – not to let “common thought” discourage them from creating the art inside them.

That’s something Kanye himself abides by. No one will impede his vision, not even himself. To that end, he told the crowd he was happy with this tour, which he felt was a better presentation of his art than his Yeezus tour, which he claimed was rushed and conflicted.

On the other hand, he’s not always right. At one point during his set, he called “Famous” the most important song he’s ever written. Though a highlight of this year’s underwhelming The Life of Pablo, the song where he boasts about Taylor Swift, “I made that bitch famous,” is far from his best work, and at least a little misogynistic. That seemed to be lost on the audience, though, some of whom wore shirts emblazoned with that phrase. (This was the third-most popular shirt that night, after the official tour shirt and a surprising number of Kanye West 2020 shirts.)

The crowd also largely failed to appreciate the gravity of Kanye’s 2013 track “Blood on the Leaves,” which samples Billie Holiday’s “Strange Fruit.” On this night, that song seemed to take on an even bigger relevance in the light of the recent shooting death of Terrence Crutcher and others. Its performance was a somber moment whose impact was lessened by people hopping around like it was any other jam.

Yet that wasn’t exactly surprising. Kanye kept the energy up throughout, playing to those stans. Very few songs got the full treatment, which allowed him to blast through his massive catalog. (Any excuse to blow through lesser tracks like “Mercy” and “All Day” is fine with me.) Still, there were some disappointing omissions. “Real Friends” and “30 Hours” are the highlights of The Life of Pablo — even more so than “Highlights” — but they didn’t get any love here. And while I’m sure it would have alienated the audience who just wanted to dance, even a snippet of his 12-minute debut-closer “Last Call” would have been heavenly.

Kanye’s a complicated artist, of course. Though an undeniable genius with an oversized ego to match, he can’t give his disciples everything they want. Or can he? There were moments where we couldn’t have gotten any more. “Flashing Lights” proved to be the rare song where every audience member having their phones out actually added to the show. And his exuberant 2005 hit “Touch the Sky” provided the perfect high note to go out on, even though he still had a few more stellar songs to go.

So even if Kanye continues to dabble in areas where he doesn’t shine (ahem, clothing) or can no longer claim the title of the best rapper alive (thanks to competition from folks like Chance the Rapper and Kendrick Lamar), he was about to prove one thing last night.

There’s still no one bigger.