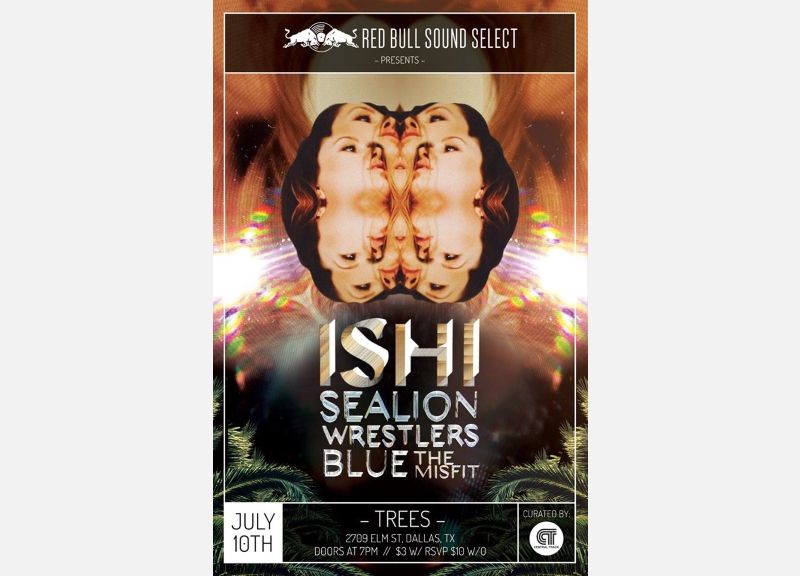 This month's Sound Select show is still ahead — ICYMI, Parade of Flesh is bringing The Riverboat Gamblers, Son of Stan and Richie to Three Links this Friday, June 26 — but we just couldn't sit on next month's show announce any longer.

That's because July's Red Bull-sponsored showcase — which will go down Friday, July 10, at Trees — will feature a bit of a different approach.

When we once again take over curation duties next month, we're eschewing the whole buzzy national headliner formula in favor of a (mostly) local bill, each of which has previously appeared on a previous Sound Select show. Heading things up is Dallas electro-dance outfit Ishi, margarita punks Sealion, local producer/hip-hop sensation Blue, the Misfit and Houston dance duo Wrestlers.

As is the case with all of these shows, this one will cost $10 at the door, but discount $3 tickets will be available for those that RSVP in advance right here. Just remember: An RSVP does not necessarily guarantee entrance; as ever, admittance to this show will be afforded on a first-come, first-served basis. Needless to say, it's always a good idea to show up early for these things. We'll also have some other perks that we'll announce closer to the show date.

In the meantime, here's what you can expect from each of this month's performers.

Ishi. Between its giant light rigs and pulsating rhythms that are bolstered by a live backing band, Ishi shows are a cavalcade of the senses. This one should be extra special, though, as the band's releasing a new single via Audiophile Deep later this summer, which the band says will be just one of the new songs it'll be performing at the show. You'll also hear some cuts from the band's upcoming third LP, which its members say should be released in 2016.

Sealion. Just like the last time Sealion appeared on a Sound Select bill, July's showcase will serve as something of a tour kickoff for the band. Also like last time, the band's got a new EP set to drop in the coming weeks that was produced by June Sound Select performer Son of Stan, which means you'll probably also hear plenty of new material from these guys, too. No matter, it's a pretty universally accepted fact around these parts that Sealion is far and away one of the best live bands in Dallas. Period. So, yeah, we're stoked.

Blue, the Misfit. Continuing to push last year's No Child in the Wild LP — an album we unabashedly adore — Blue, the Misfit has been a major player in helping grow Dallas' finally-starting-to-get-some-national-shine hip-hop scene. That's largely because he's always down to hop on rock and punk bills and bring fans of those scenes into the fold. It helps that his high-energy performances generally tend to stand up to those types of acts, too.

Wrestlers. Houston's Wrestlers may have helped set things off at December's #yearender edition of Sound Select, sure. But in the months since, they've added two new Wrestlers to the fold, and have come up with a completely new live set. So, yes, as is the case with each of the other performers on this diverse lineup, you're going to hear a few things during the band's set you've never heard before.

National headliners be damned, this all-Texas lineup is bound to be a party all the same. Just remember: You've got to RSVP here to get access to those discounted tickets.