Vetiver’s Van Is Solid And Dependable.

By the time Andy Cabic’s Vetiver project landed on Sub Pop in 2009, he and his revolving cast of musicians had already been all across the country in support of their brand of freak-folk since 2003.

It’s easy to see how Vetiver’s cultivated its audience over that time. The band’s laidback, human aesthetic is one that sticks with listeners over time, while also showing them room to grow.

Recently, the band braved the April showers to play Dada in support of last March’s Complete Strangers LP. There, they offered up a diverse array of funk, power-pop and everything between, showing themselves capable of still finding new little niches to explore.

It was at Dada we caught up with Cabic to ask about the inconspicuous Chevrolet Express he’s been touring the country with for the past year. He assured us that, in spite of its looks, it’s a comfortable and reliable vehicle.

Tell us about your van.
Andy Cabic (Guitar/ Vocals): “This is a 2010 Chevy Express. I bought it with about 70,000 miles on it. Now it has about 105,000. I got it last year. For 10 years before that, I had an old Club Wagon. I ran that basically until I thought it couldn’t make a journey around the states anymore. So I sold that to a friend, who then turned it into a really cool sort of travel van. He put these awesome floors down and made it a surf travel vehicle. So I still see it around town. It has a new life.”

Where did Bruce get its name from?
Andy: “Well, my old van, the Club Wagon, I bought it from the San Bruno Baptist Church, so its name was Bruno. And so when I got a new van, we needed some kind of ‘Bru’ and Bruce was feasible.”

Where’d you get Bruce?
Andy: “This one came from a used car dealer. I needed something sort of fast. The departure date was approaching and I had to get something. It’s great, though. It’s got great pickup. It’s got air conditioning. These were features that were not in the prior van.”

So you haven’t had Bruce all that long.
Andy: “Yeah, May of last year was his first tour. He’s done the country once and the West Coast a couple times. Then around Idaho. I mean, I guess he’s done 35,000 miles so far.”

What makes Bruce special — especially compared to Bruno?
Andy: “Um, I mean it’s just newer. I had a 1990 Club Wagon and that was the last year where they had the old design that they had all throughout the ’80s. The very next year, they started to look like the way vans do now. So this just looks like a normal van — kind of like vans I’ve rented. It’s an improvement in that it’s just more comfortable. It’s probably safer with airbags and stuff like that, and seat belts that all work. These things are creature comforts of touring. But I don’t know if there’s anything endearingly special about Bruce. It’s just like a solid van.”

Do you like to keep Bruce clean on the road?
Andy: “I certainly try. It’s funny how these doors crease and hit the vehicle. Yeah, I mean he’s pretty clean now. He’s not too bad. The front’s got a lot of bug splatter at the moment. One interesting thing is that, the day before this tour started, I went to go check on him, because I park him in the city in San Francisco, and I drove by the spot where I park him, and he wasn’t there. He got towed the day before we left. Because, unannounced to me, that morning, the spot I parked him in had become a construction zone. And so they had towed him. So that was a drag. But at least it wasn’t stolen. You asked about endearing qualities, and I don’t know what qualities there are besides that he’s reliable. I think that’s a feature, and the pickup is a great feature. I don’t know that there’s anything all that special, but he’s a simple guy. He’s grey, he’s spacious. It’s an extended van. But there’s nothing really happening inside tour-wise. Y’know, I found that the last van, which was a church van, just the fact that I left on the side that it came from a church got me out of all kinds of jams. And I feel like, keeping this van inconspicuous is the best thing that I can possibly do. I don’t want to pull any attention to this van, inside or out. We got pulled over by a cop earlier today for speeding. He just let us go and didn’t think anything about it. He said something about not being able to do anything but cite us because we’re from California or something. Not sure what that was. But, yeah, I don’t know. Nothing too endearing. But he’s dependable. I rep for Chevy Expresses. I wish I could make it more interesting for you.”

Are you the one that usually does the driving?
Andy: “Yeah, I do. But other people chip in, too.”

Is there anything else we should know about Bruce?
Andy: I don’t know. My van is just a van. The last van I had had a lot of character to it, and so I think as I’ve gotten older, I realize I’ve settled down.” 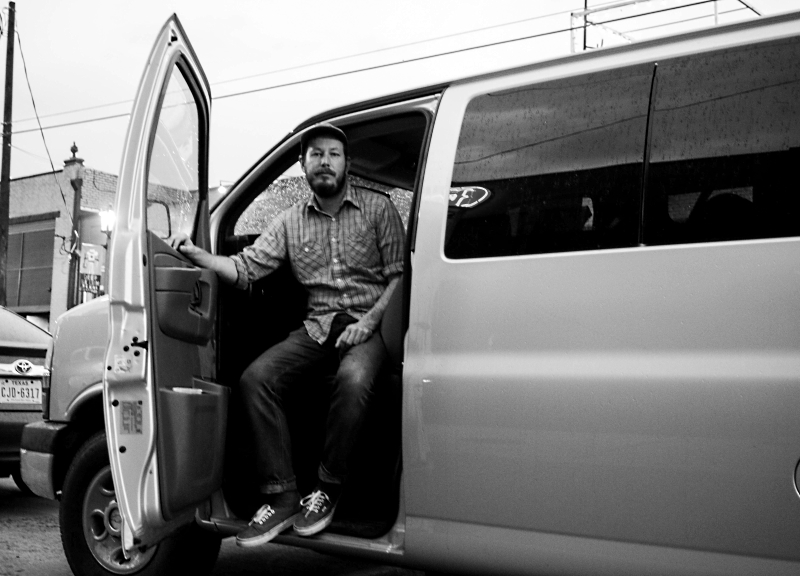 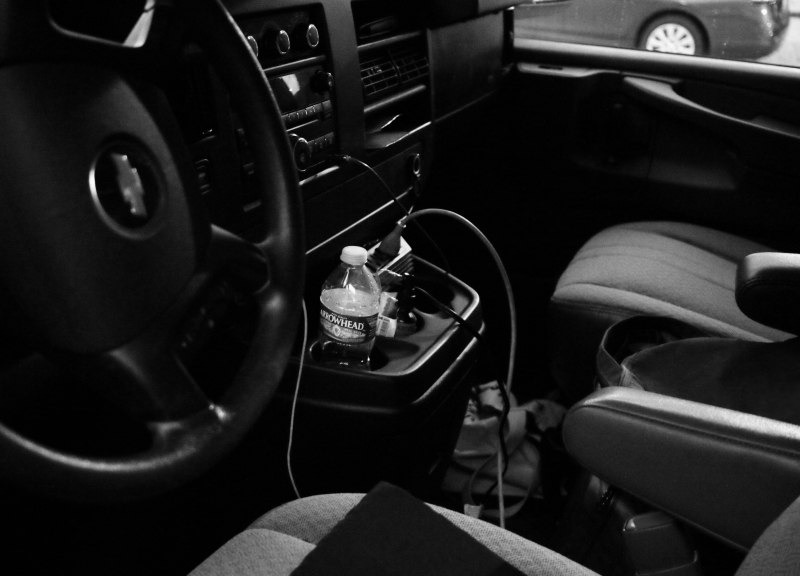 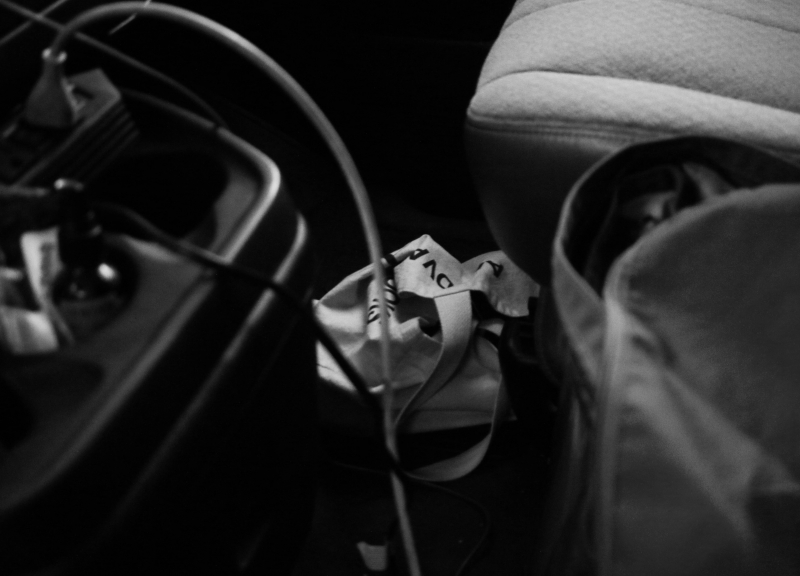 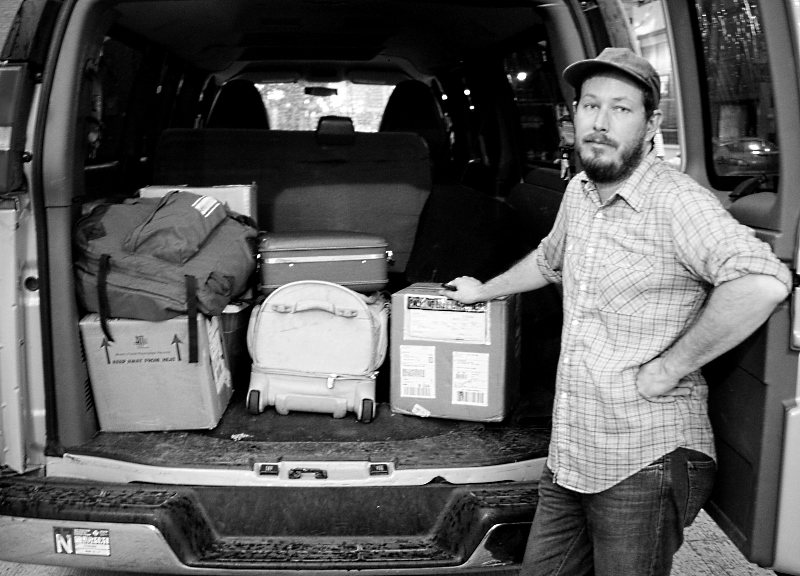 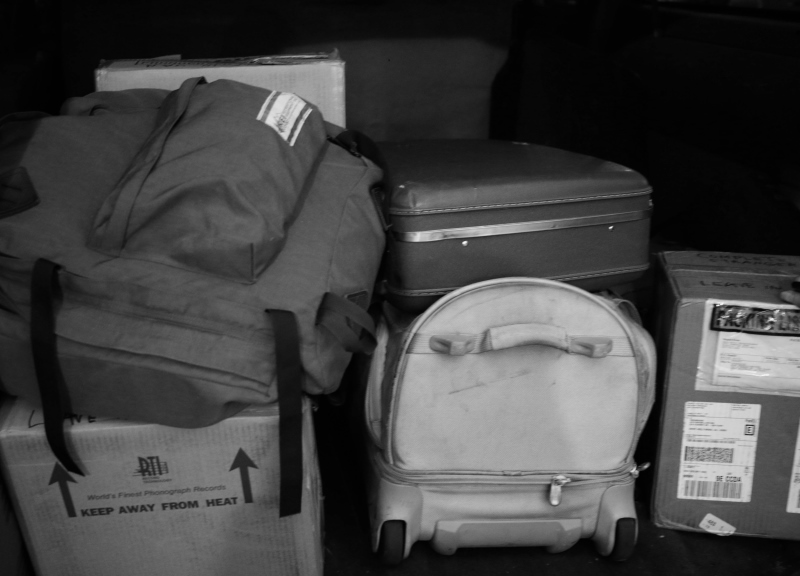 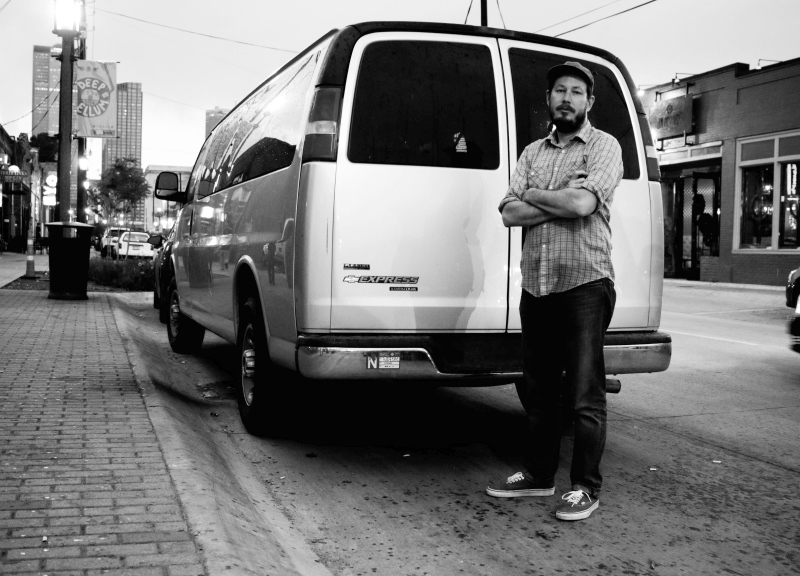