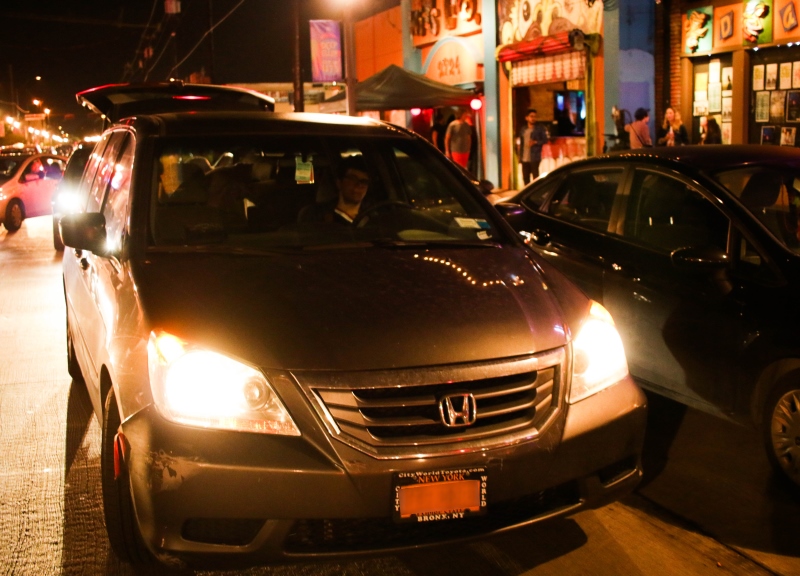 For the last few years, Frankie Cosmos, the bustling bedroom pop project from Greta Kline (read: daughter of actors Kevin Kline and Phoebe Cates) has been on the come up. Due in part to the infectious internet following and Kline’s latest effort Next Thing, released just weeks ago, winning the hearts of teens and young adults all across America, including a “Best New Music” rating on ye olde Pitchfork. It’s all come to a swell, resulting in a series of near-capacity and sold-out shows in mid-sized clubs all across the country as part of her biggest tour to date.

In a live setting, where it’s rounded out with a full backing band, including bass, drums and some minimal keys, it works surprisingly well, too. We can attest to this firsthand, as we were at Dada when the band made a nine-hour drive from New Orleans the night before to play for the Dallas crowd.

It was also there we took a few minutes to ask the band about its current tour vehicle, a quirky Honda Odyssey that’s been making the band really feel the Bern this tour.

First off, what exactly are we in right now?
Luke Pyenson (Drums): “This a 2010 Honda Odyssey. It belongs to our friend Steve.”

How long have ya’ll had it?
Greta Kline (Guitar/ Vocals): “We’ve just had it for a week, just since the tour started. We are borrowing it from him.”

Do either you or Steve have a name for it?
Luke: “No.”
Anna McClellan (Frankie Cosmos’ opening act): “No.”
Greta: “Well, I’ve been calling it Bernie, because it’s got a Bernie sticker. That’s just the funny little noise that it makes.”
Luke: “Yeah, it’s the brakes, the brake pads or something. Just waiting for them to fail.”
Greta: “Oh, Bernie and his little quirks.”
Luke: “Welcome to Bernie, the doors are locked behind you.”

What are some of Bernie’s other quirks?
Greta: “Yeah Luke, would you care to elaborate on the quirks of Bernie?”
Luke: “Well, the brake thing rears its head every so often. It’s inconsistent. It’s a…”
Anna: “It’s a beautiful noise, though.”
Luke: “The charm is that it’s inconsistent. You never know if he’s going to squeak a little bit.”
Greta: “It’s in perfect A 440.”
Luke: “It doesn’t feel dangerous, but it doesn’t feel 100 percent safe, which is kinda cool.”

That’s good. So, who usually does the driving?
Luke: “Anna and David actually do the most driving. But you know what, everybody has their kind of strengths and weaknesses. Like, I’m more of an urban driver, even though I’ve referenced being frazzled, I kind of thrive when I’m frazzled and I come from a city that’s notoriously difficult to drive in.”
Luke: “[Bassist] David [Maine] and Anna are both better at long haul highway driving.”
Greta: “They both drove most of the way from New Orleans.”
Anna: “I really like this car.”
Greta: “This is our first time touring in a minivan.”

Really?
Greta: “Well, I’ve done some tours in a 15-seater that was a rental, but we’ve done most of our tours in an SUV. This is so much nicer, because we have just a little bit more space.”
Luke: “Yeah, I love it.”

How many people are currently touring in this vehicle?
Greta: “Right now four, but there’s going to be a three-day period where there’s five of us in this car, which means we’ll have to pull up one of the back seats and somehow still fit everything in the trunk.”
Luke: “It’s going to be tough. That’s the noise Bernie makes when you don’t have your seat belt fastened, so I’m going to ask you to do that.”

You were saying that you’ve toured in other vehicles, what makes this one more special than those others?
Luke: “The people within.”
Greta: “It’s all about the group. Well to me this one’s kind of special because it belongs to a band that is one of the first bands that made me want to make music. To me, that’s cool about it.”

What band?
Greta: “It’s my friend Steve who has this band No One & the Somebodies. They played the first rock show I ever went to in 2008. So it’s cool to be on my biggest tour yet in this van.”

In the time that you’ve had it, where all has it taken you?
Greta: “You mean like what places?”
Luke: “Like, existentially or geographically?”
Greta: “We went to DC. We went to to Raleigh, North Carolina; Richmond, Virginia. We went to Atlanta, Georgia.”
Anna: “Definitely Alabama.”
Greta: “Alabama was amazing.”
Luke: “Bernie loved Alabama.”

Like a Garmin?
Greta: “Min is short for Garmin.”
Luke: “She’s asleep in there, in the glove compartment. Please don’t open it.”

Is there anything else we should know about Bernie?
Greta: “I don’t know. You should care about Bernie because he’s bringing us to the people in America to get us around so we can play the musics.”
Luke: “I love this vehicle. I really love how it feels.”
Anna: “Also, Bernie Sanders for president.”
Greta: “Definitely. If you’re going to vote, vote Bernie.”
Luke: “Big win today for Bernie.” 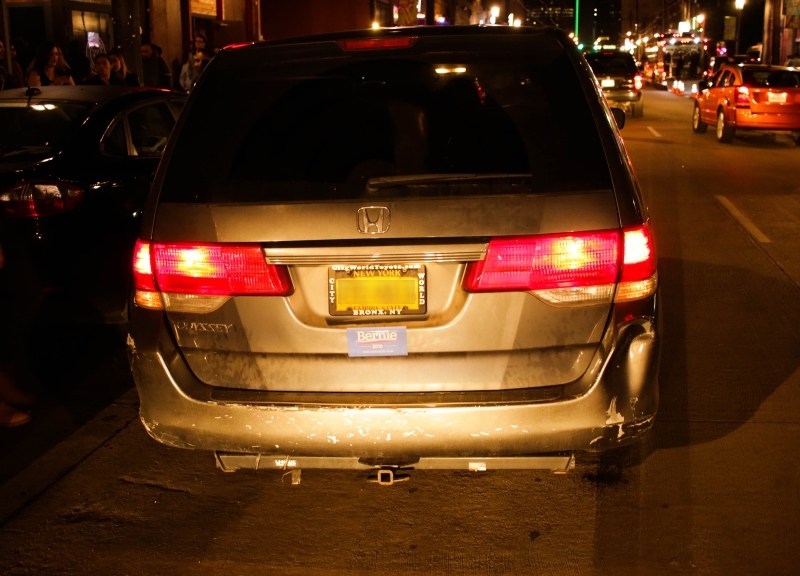 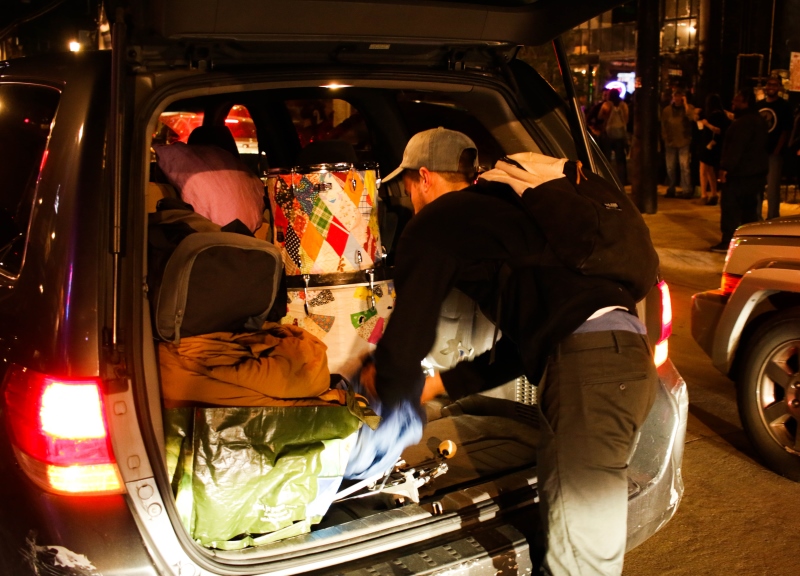 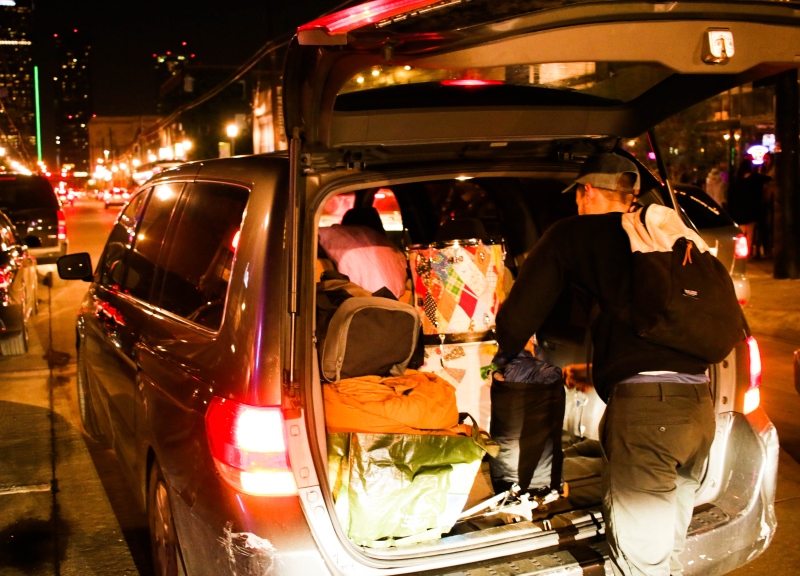 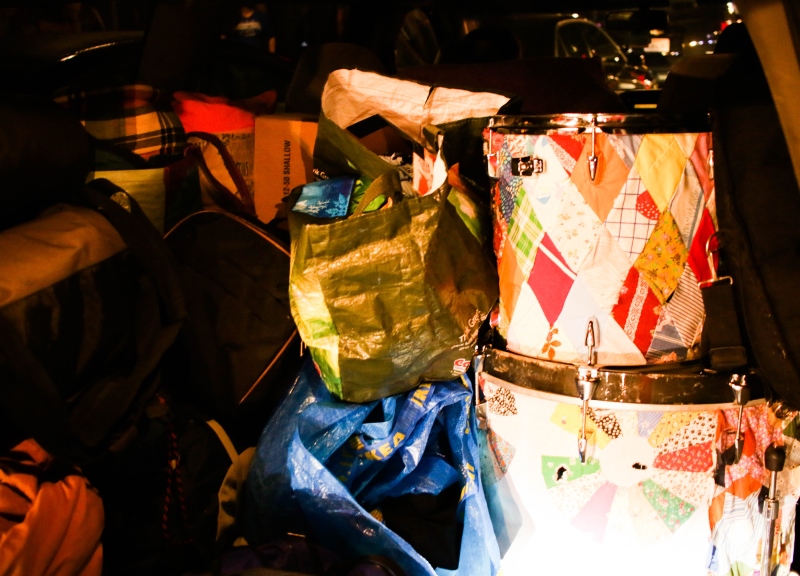 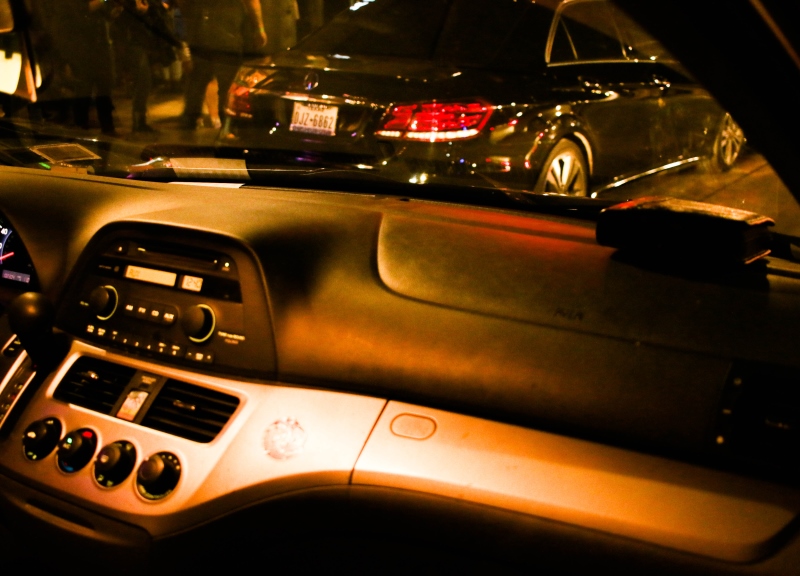 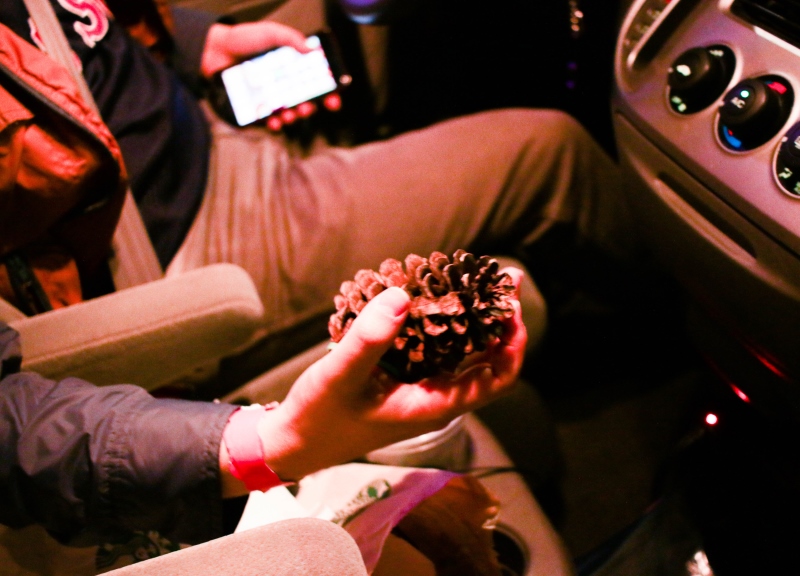 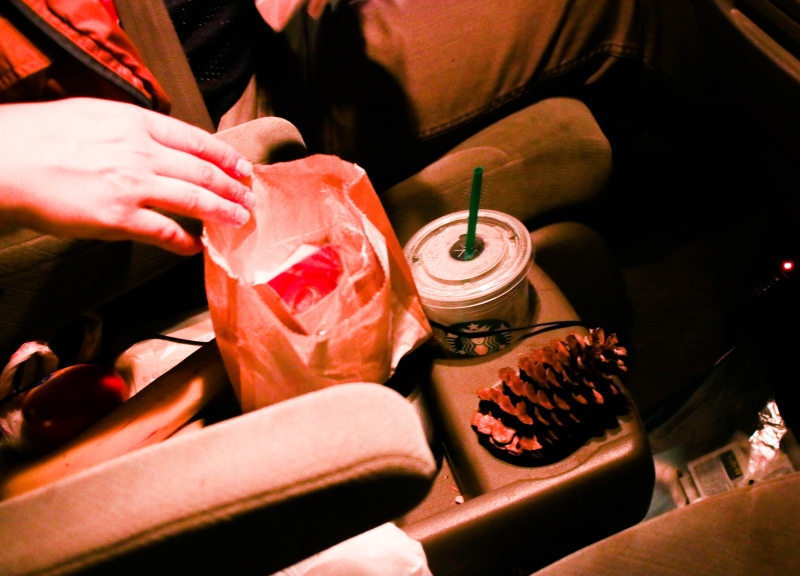 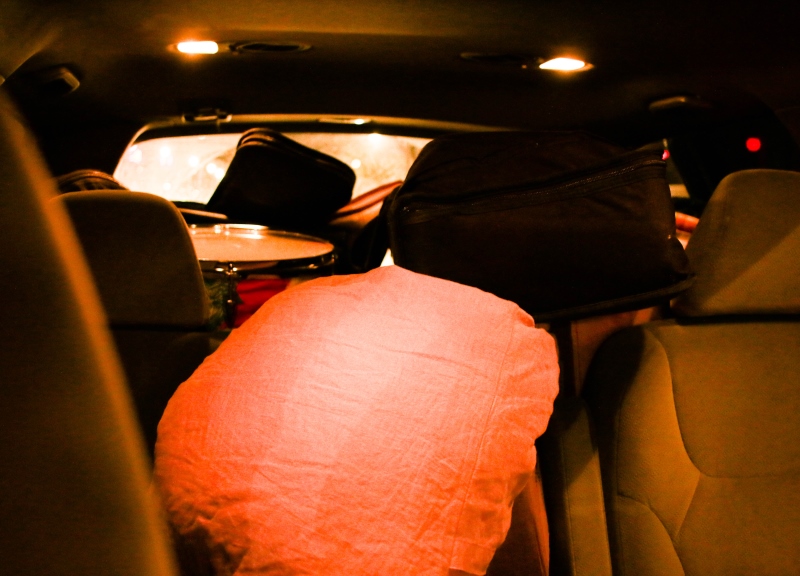 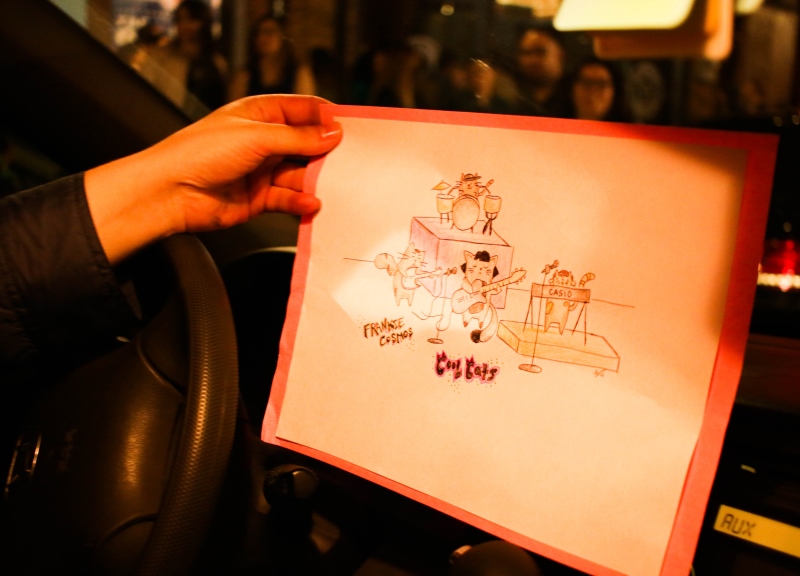 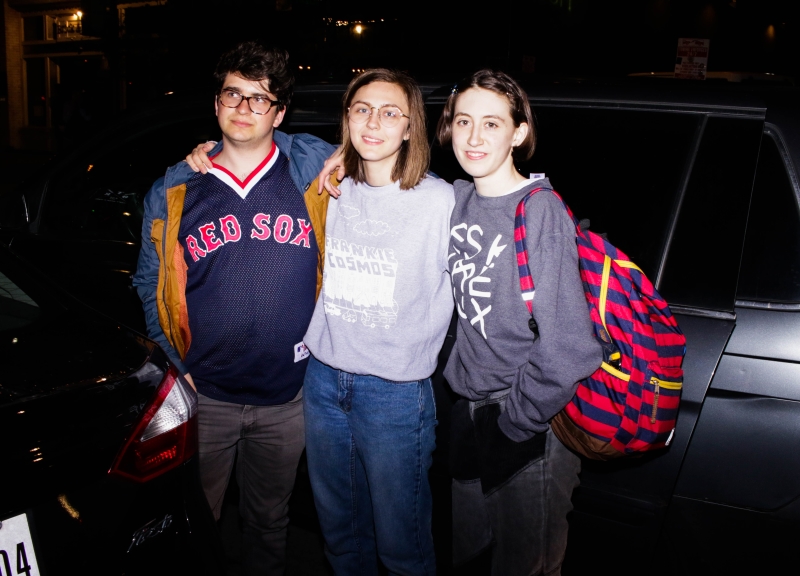 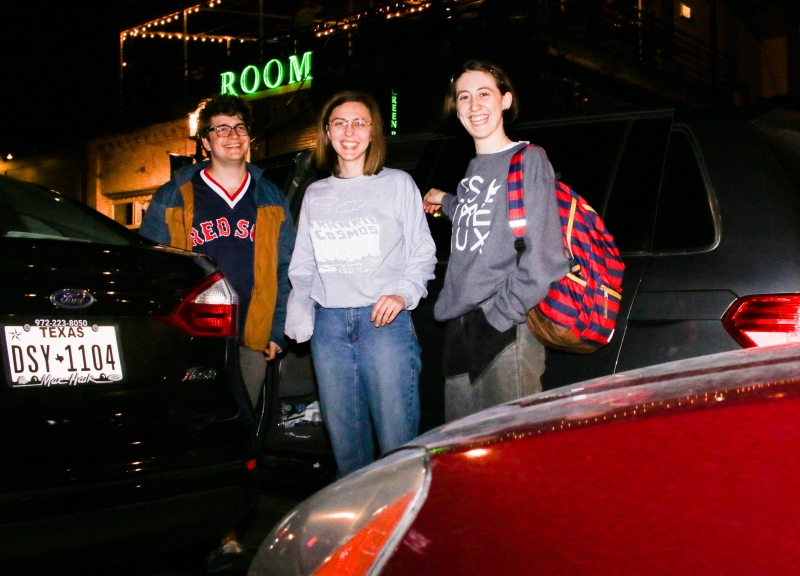