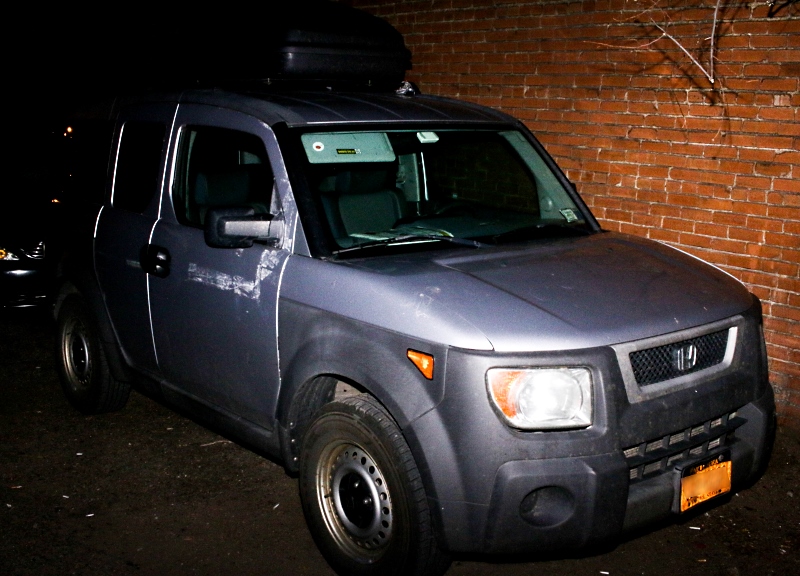 Life On The Road Really Finds Diet Cig In Its Element.

Diet Cig likes to refer to itself as a “Slop Pop” band, but when you give a spin to the duo's latest Sleep Talk seven-inch that it released last autumn, you can't help but fall in love with the burst of lo-fi, DIY, suburban-exposed run on pop that flows. The same goes with the duo's Over Easy EP that was released nearly a year prior and praised intensely via sites like Pitchfork and Stereogum. Now, kids everywhere are singing along to Diet Cig's silly little minimal pop hooks about the everyday being.

Of late, these two “homies just making tunes and eggs on the regs,” who met in unlikely circumstances, find themselves touring the South, playing a number of sold-out shows, including a recent one with Nashville's Bully at Three Links here in Dallas. Just before doors at that one, we chatted with frontwoman Alex Luciano and drummer Noah Bowman about their beloved Element that's still going strong after 13 years on the road, thanks to the astronomical power Honda pumped into it so long ago.

So you guys are currently on tour with Bully?
Alex Luciano (Guitar/ Vocals): “Yep, we're with Bully in the South. It's been a lot colder than we thought it was gonna be — but probably warmer than New York, so it's OK. Or Alaska. Or Chicago. We're headed to Chicago in a couple days and we brought mad sweaters for that. It's going to be so cold.”

And what kind of vehicle are you traveling in?
Noah Bowman (Drums): “So it's a Honda Element.”
Alex: “With a Thule roof rack! It's got the sleek look like a soccer mom on vacation.”

Hey, a band in something other than a Ford E350 for once!
Noah: “Well, it helps because it's just the two of us, so we don't really need a van that big.”
Alex: “This thing's the best.”
Noah: “The gas is good in it.”
Alex: “And it has suicide doors, which are funny. It's really funny. It's so stupid, but kind of a fun thing.”
Noah: “It's great because you can keep people out.”
Alex: And if you're sitting in the back, you can't get out unless this door's open and the seatbelt's unbuckled, so it's a really strange contraption. It'd be the ultimate kidnapping car, if that was our job.”

So how long have you had your van?
Noah: “I got it when I was 16. It was my first car. I've had it — I'm 23 now — so a pretty long time. It's holding up. It's got some bumps and bruises, but it's OK.”
Alex: “It's been through some shit, at least since I've met you.”
Noah: “I've done at least three or four tours before Diet Cig was a band. How many tours have you done so far?”
Alex: “This is our fifth tour. But one of the tours was in England, so I guess it doesn't count. So this car's been through four Diet Cig tours. Anyway, we've done a lot of tours with this car. Four tours. In Utah, the window got smashed, which sucked. We had to drive eight hours with no window, with plastic rattling. There were some dark times in that vehicle.”

Has anything else like that happened to your vehicle along the way?
Noah: “The front struts blew out.”
Alex: “For so long it would [make a muttering sound] when we drove. It was so bad. It was crazy, but not too crazy to breakdown the car. But we were like, 'We don't need to fix this.' The whole car was vibrating.”
Noah: “We drove from Memphis to Chicago overnight with the car like that and it was miserable. So miserable. But the end result was we had to miss one show to get it fixed. But luckily they fixed it.”
Alex: “Have we had any other fun times in the car?
Noah: “Yeah, we drove it through New Mexico, through the sand coves, that was fun. Because it is all-wheel drive, it can handle all the snow and stuff, so it's good on sand.”
Alex: “Yeah, we took it camping and drove it to the bottom of a basin basically parked it and slept under the stars that night with our friends. I took a photo of it and it looked like a Honda ad. It was so cheesy.”

Have you made any modifications to the car since you've had it?
Noah: “Not necessarily. We had a different Thule rack before. That one's fairly new. It's a little bit bigger.”
Alex: “You took the seats out.”
Noah: “I took the back seats out. So now it's pretty much like a minivan.” Alex: “It's kind of like cargo van. Truckin' along. But yeah, that's pretty much about it that we modified to it. Just the seats taken out.”

How clean do you tend to keep your vehicle on the road?
Noah: “I like to keep it clean.”
Alex: “I'm a mess, though. I get all my shit everywhere, and sometimes I sew in the car, so there's little strings of floss over there, like all sorts of weird little food bits, like carrot butts and stuff. But usually, Noah cleans it pretty well.”
Noah: “It's kind of like my morning routine.”

Is there anything else you'd like to add about your Element?
Noah: “I like it.”
Alex: “Someday we're going to get a tattoo of the outline of it, right?”
Noah: “When he goes — or she goes — the car goes, I will get a tattoo of it to remember it all.”

How old is it?
Noah: “It's an '03. Shit, it's 13 years old now.”
Alex: “They stopped making them.”
Noah: “I think it was the first year that they started making them. They stopped making them a couple years ago, I think.”
Alex: “It's so funny, I found one of Noah's old dressers in my old apartment, it must have been from when you were a kid, and there was all these Honda Element stickers that were like 'Space car, take it through the stratosphere.' Like these crazy hilarious branding stickers that he must have gotten when his mom got the car. It was so funny seeing all these Honda Element stickers, with the way they were trying to brand it.” 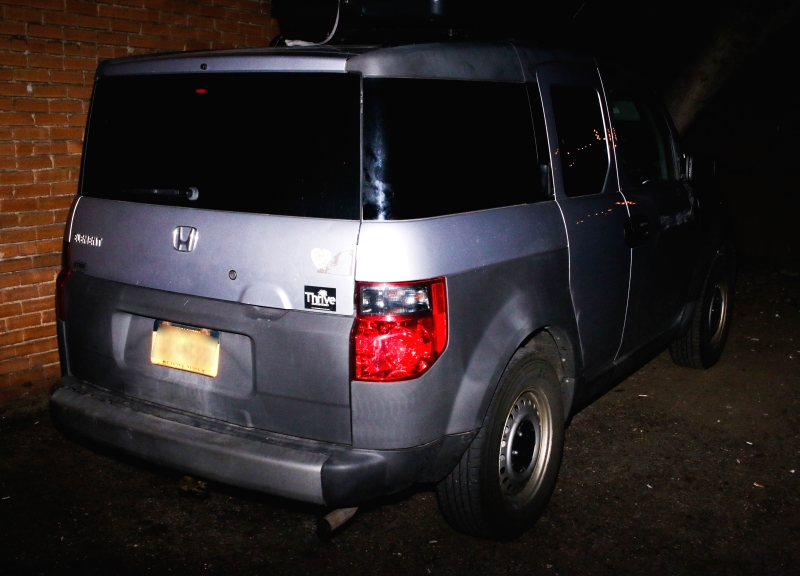 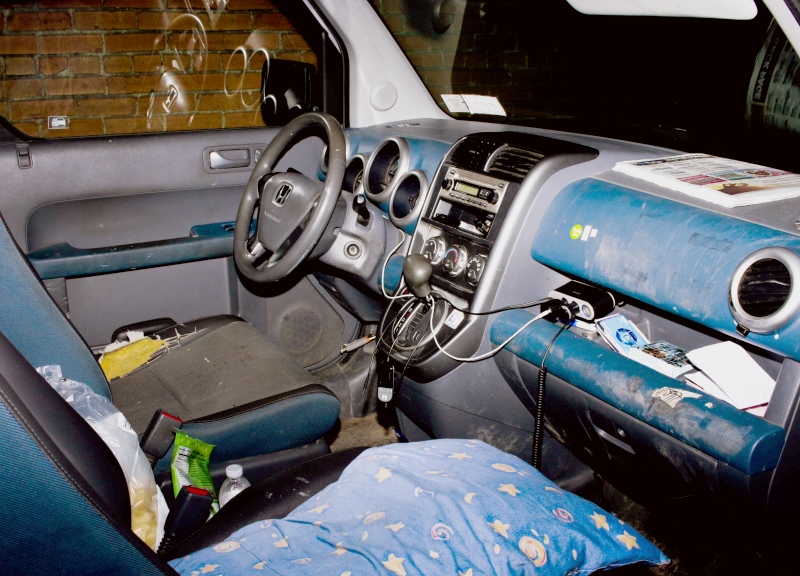 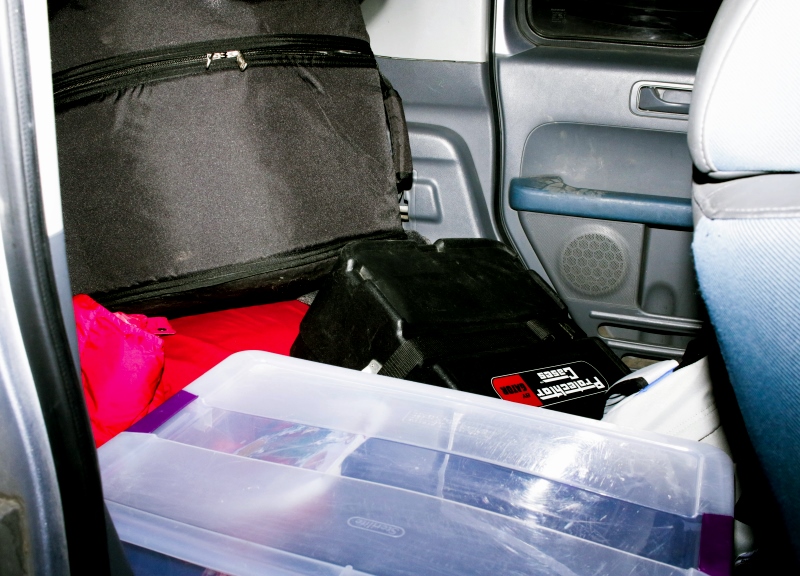 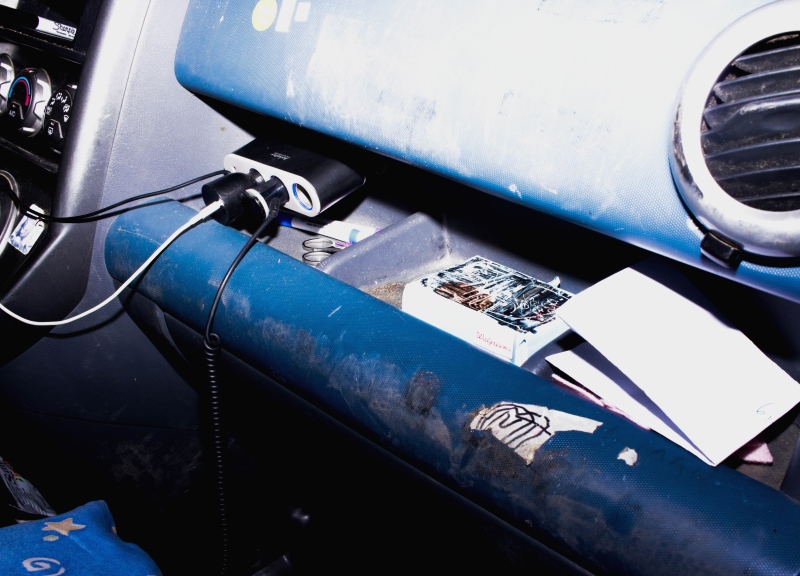 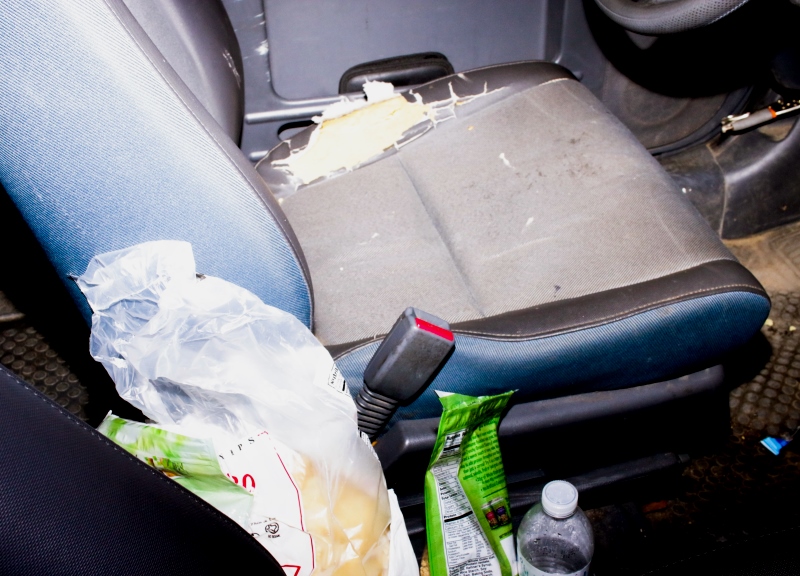 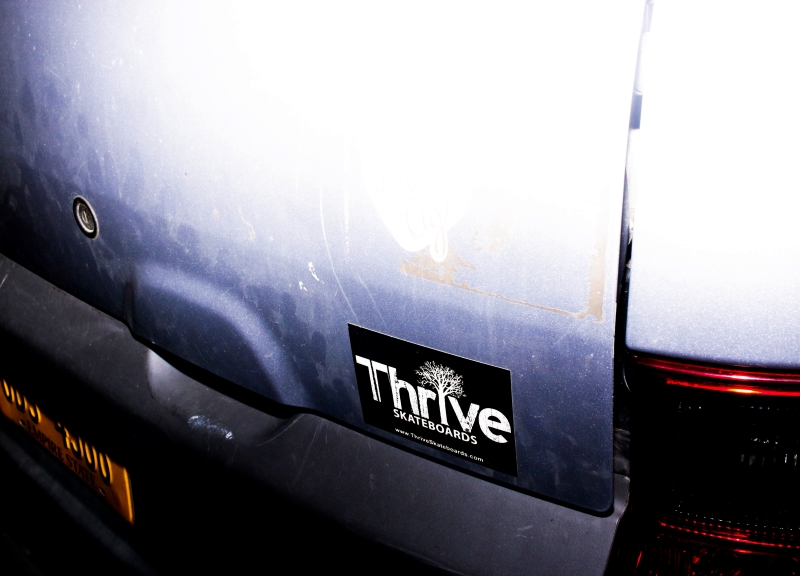 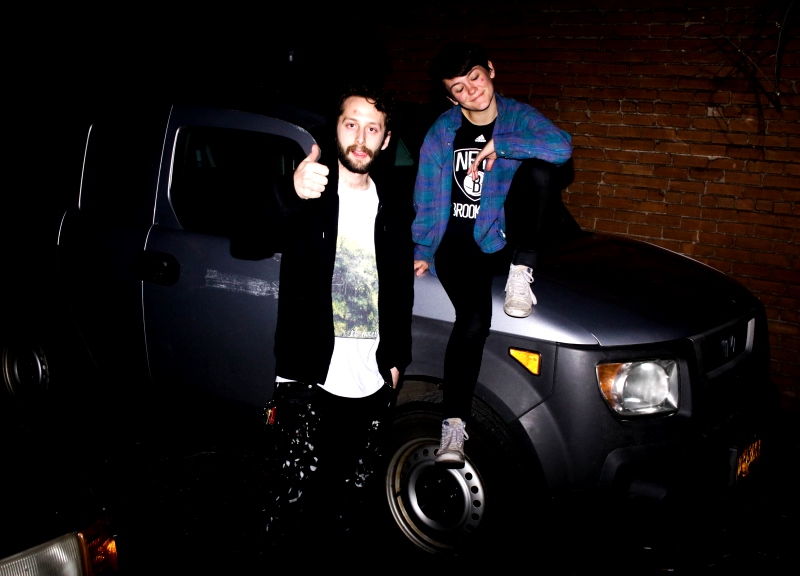