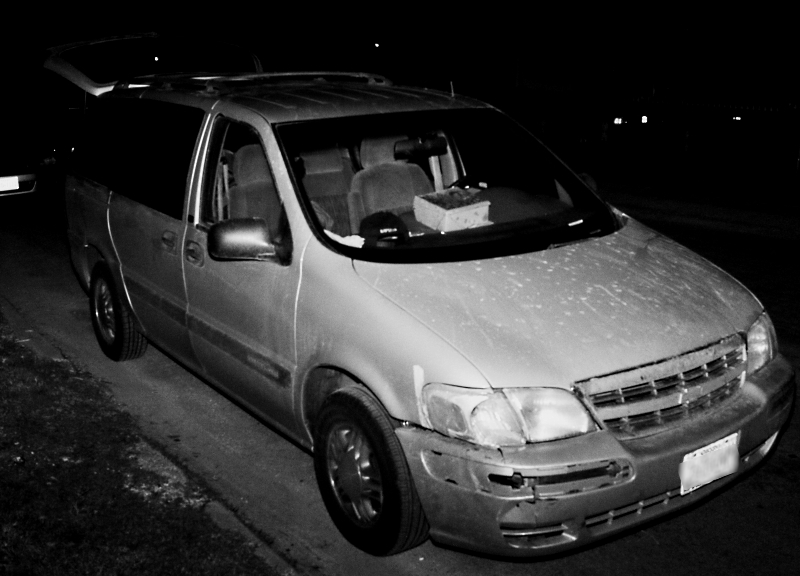 Love Cop's SUV Is At The Top Of The Food Chain.

Over the years, lo-fi Portland bedroom pop duo Love Cop has put out countless tapes, seven-inches and other releases via Gnar Tapes, Burger Records and Lolipop Records. And though it's often hard to hear them through the heavily distorted vocals employed by the band, even the quickest glance at the lyrics on its BandCamp page reveals that Love Cop's members are quite the humorists.

This is certainly something we found to be true when we caught up with the band outside of a recent Dallas house show, where it was sharing a bill with its local label mates in Sealion.

For example: When we asked the band about its recently broken-into van — seriously, what the fuck is up with every band having its shit stolen lately? — we got a pretty detailed rundown on the best fast food spots all over the country.

With that in mind, keep reading to learn more about the band's well-travelled SUV, as well as its thoughts on the one spot where you should never eat in Denton.

Tell us about your van's name.
Duffy Rongiiland (guitar/vocals): “This is the Silver Bullet. It's what we're riding in these days.”
Phil Salina (synth/vocals): “I think that's nickname for Coors Light, but I'm not 100 percent. I'm pretty sure it was the cans that look like silver bullets. I think they call the regular Coors 'Colorado Kool-Aid.' So this is The Silver Bullet, because it's silver. Long story short.”

How long have you had the Silver Bullet?
Phil: “Two years, or so. We had a van before this was, what was it, purple?”
Duffy: “It was purple, and I think we named it The Purple Pussy Eater.”
Phil: “The Purple People Eater. He's being vulgar. Don't print vulgarities. I'm joking.

So what happened to that van?
Phil: “That van was actually sweeter, because everything in this is electric, so the windows and the doors stopped working. The other one was tight, but what happened was it was parked outside Gnarnia, the old Gnar Tapes house where Duffy was living for a while, and next to Gnarnia there's this local restaurant chain called Burgerville…”
Duffy: “It's some shitty version of Whataburger.”
Phil: “And some yuppie who owns the place — who is a lesbian with a wife driving a Subaru Outback van, eating sustainable local cuisine, very stereotypical Portland — she was eating while she was making the turn, and she crashed right into our van and just scraped it all down the side. Luckily that time, Stevie from Mope Grooves was living with Duffy, and he was out there taking pictures randomly, and saw the whole thing, captured it all on tape.”

How much did the insurance people give you?
Duffy: “They gave me a thousand dollars more than that van was worth, because we were at no fault and could prove that we were parked perfectly. This was not our fault. So then, we talked the dealership down a couple hundred, maybe $500, on this.”
Phil: “With this van, we thought it was an upgrade, but with all the electric [features], it sucks. With the brakes and all, it was made for a soccer mom who would go camping in 2000. So they had money to fix this shit, but we don't. The doors just stay broken. The window stays broken. But yeah, that's how we got this. But otherwise, it's pretty reliable.”

Has it ever broken down on you guys?
Phil: “No.”
Duffy: “But we had a battery die in San Francisco. This is another reason we'd rather have the other van — the batteries in this one are in a weird spot. So we had to pay three times as much, because they had to take part of the engine apart to do it. So it was really big hit.”
Phil: “It's a really complicated vehicle.”
Duffy: “Yeah, they made it where you have to go to a dealership or something stupid.”

What kind of van is this?
Duffy: “It's a Chevy Venture. It's a 2001. I don't recommend them. But it's actually pretty sweet. It's big enough. We took the seat out of the very back so we can just stuff gear and there's camping pads back here, too.”

I see it's mildly dirty, too.
Duffy: “Well, we just spent a week in the snow. More even, I think. Like a week-and-a-half maybe.”
Phil: “It's been a filthy tour.”
Duffy: “It's been really raw. This is the first day my feet aren't wet the entire time. I think everyone is wearing sneakers.”
Phil: “This is the first day it's not either snowing or 17 degrees. We played a house party in Nashville the other day, and I thought Nashville was in the South, but it was freezing and snowing everywhere. And it didn't end till four in the morning because there were so many bands. It was a DIY venue, but a pipe burst, and the place was flooded. So they moved it to a house, and we're like, 'Oh, great.' It was a venue with three stages so it wouldn't go super late. But the house show turned into a drunken frat party. So I go to sleep in the van and when I woke up, I thought I was dead.”
Duffy: “I thought he was dead, because he had been out there for like two hours and it was six degrees or something scary.”
Phil: “I'm trying to die like that — no I'm just joking.”
Duffy: “I'm trying to live like that.”

In spite of that, what keeps y'all sane on the road?
Duffy: “Weed.”
Phil: “Drugs.”
Duffy: “iPhones.”
Phil: “I don't know, we stop…”
Duffy: “X-Files.”
Phil: “Yeah, X-Files. But we like to stop and sample the different cuisines of truck stops. We like Whataburger in Texas.”
Duffy: “We ate at a Subway in Chicago, and they had these awesome peppers.”
Phil: “We just go to fast-food restaurants. Bojangles…”
Duffy: “White Castle, we miss that. We're from New York.”
Phil: “Our favorite's Del Taco. We eat Taco Cabana, too.”
Duffy: “Tally Ho in Lexington.”
Phil: “Taco John's: We tried it. I liked it. Everybody else didn't like it.”
Duffy: “Short Stop is alright.”

Of all those spots, which is your favorite?
Phil: “Del Taco. That's our favorite. It's the only place that you can get fries with your burrito. The Denton one, I have to admit, is one of the worst Del Taco's in the country.”
Duffy: “It's almost as bad as the one in Vancouver, Washington.”
Phil: “They're only good in California…”
Duffy: “Where they speak the secret language. You can just say, 'Go bold,' and they got you.”
Phil: “I was like, 'Dude, there's a Del Taco in Denton!' But it can't really survive out here. It's more of West Coast thing. Do you like Taco Cabana?”

Yeah man, Taco Cabana's cool.
Phil: “Yeah, one year…”
Duffy: “We fucked up really bad at SXSW.”
Phil: “We were buying brisket burritos.”
Duffy: “It was on our way to Hangover Fest in San Antonio.”
Phil: “OK, let's just stop talking about food.”

Aside from the food, what else can you tell me about the Silver Bullet?
Phil: “Actually it just kind of sucks, honestly. I'm just joking!”
Duffy: “It's alright. The air-conditioning stopped working. We tried to recharge it and it didn't work. The heat works, though.”
Phil: “I did hookup with a girl that's here tonight, in the Silver Bullet once. In California. Put that in the story. I won't name any names, but I just saw her here tonight with the girl that I'm with right now. It was awkward. That's the coolest thing that's happened in the Silver Bullet.”
Duffy: “I smoke weed in here — a lot.”
Phil: “The light just goes out sometimes.”
Duffy: “Yeah, I hope the battery didn't just die.”
Phil: “Yeah, last time we were here, LAZY from Kansas City helped us start our van after the battery died. It's actually not conducive to party in, but we're on tour with Emotional, and we we're all trying to party in the van between bands, and then we're trying to charge our phones, put the light on, chill and it just dies. The electric in this thing is fucked.”
Duffy: “Just checked, it's still good. Yeah, it is, though. It's wonky. Well, it got broken into.”
Phil: “If you want to donate to help fix everything, go to lovecop.bandcamp.com and buy all our shit.”
Duffy: “All our clothes, all our personal stuff, all our weed [got taken].”
Phil: “The most important thing was our merch, all of our records.”
Duffy: “That's the really big hit. And the locks. We're going to have to get all of that fixed, too.”
Phil: “That happened, but that wasn't the Silver Bullet's fault. We were at Sun Records checking out where Elvis recorded, and they were like, 'Fuck you, motherfuckers. Fuck you white people.'”
Duffy: “What the hell are crackheads going to do with 100 copies of a 7-inch?”
Phil: “They're gonna sell it, dude. We're a hot commodity.”

Anything else you'd like add about The Silver Bullet?
Phil: “Nah, Silver Bullet's a chill van.”
Duffy: “It sucks what happened at Sun Studios, but it's not his fault. It's more of the welcoming committee for Memphis. I sang into Elvis' mic and took a selfie, and I think the rock gods might have hexed me.” 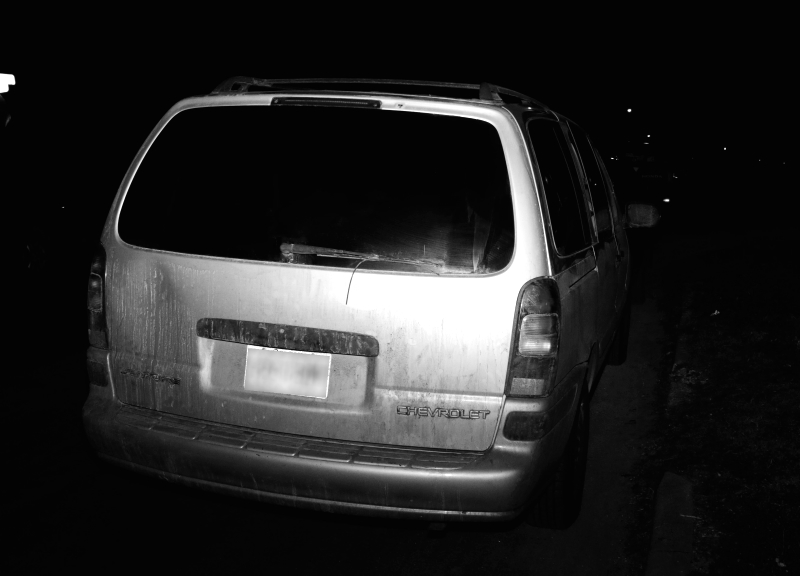 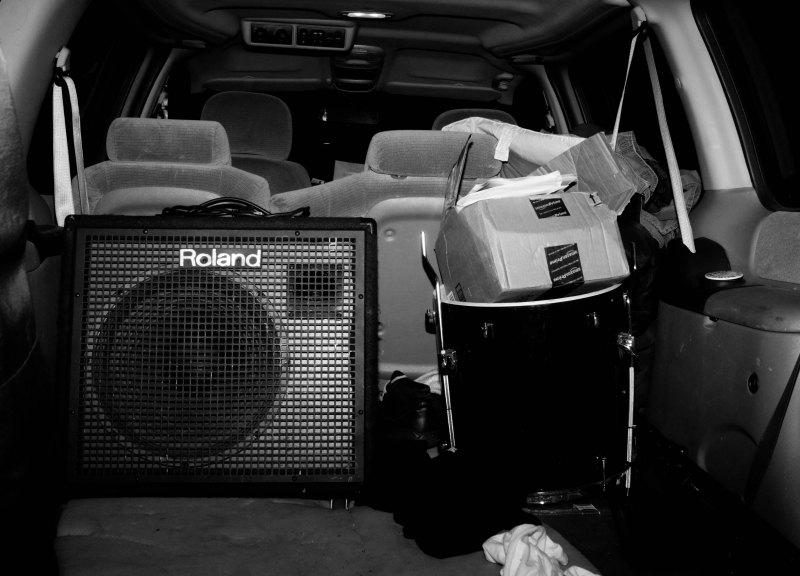 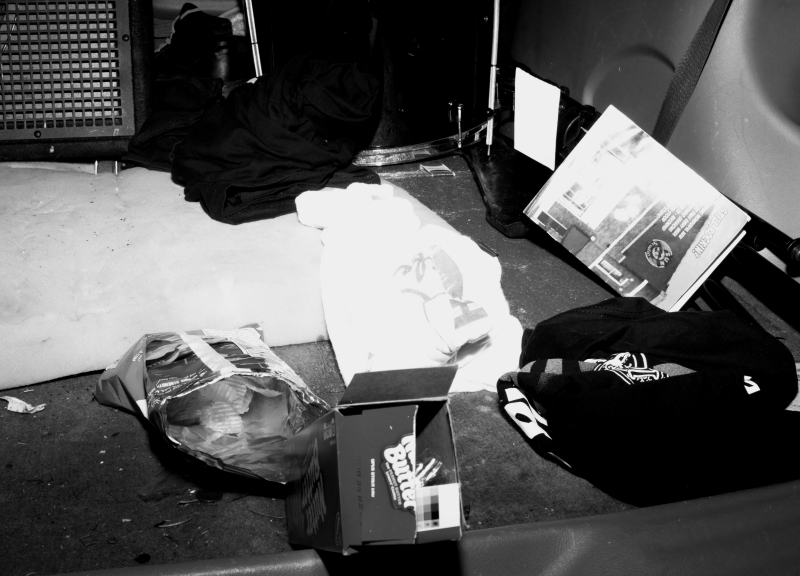 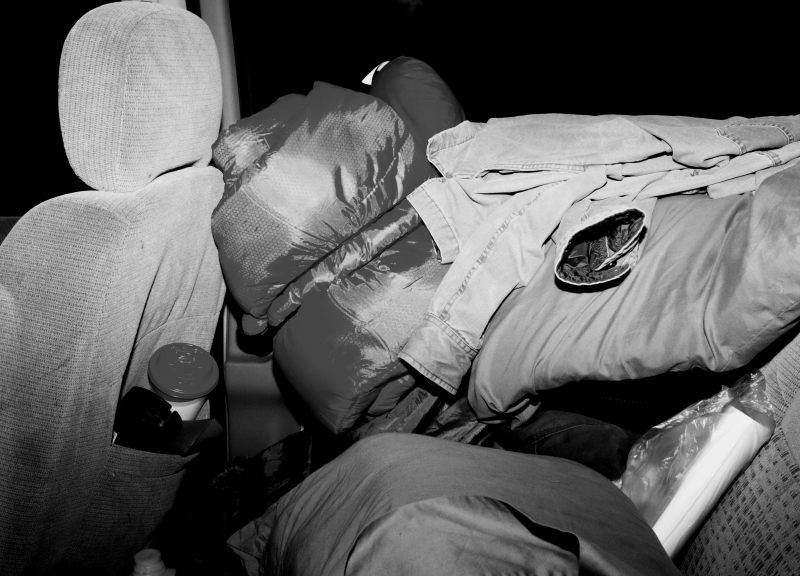 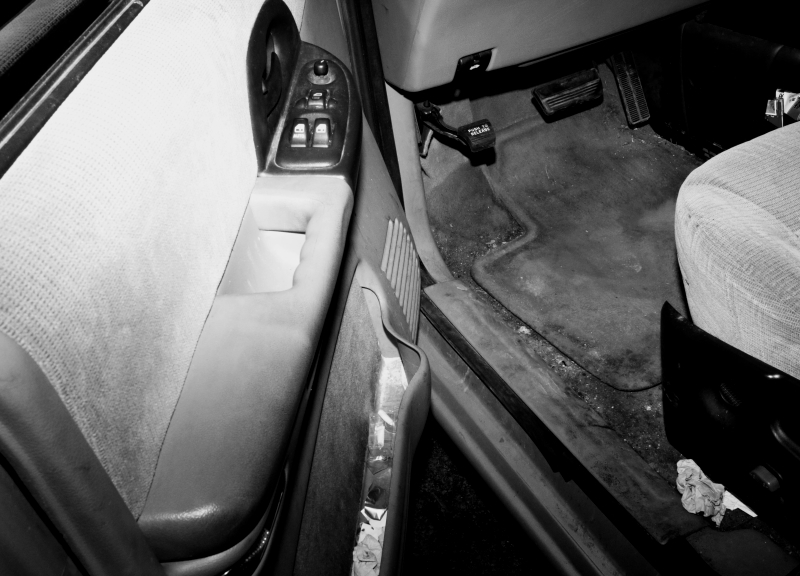 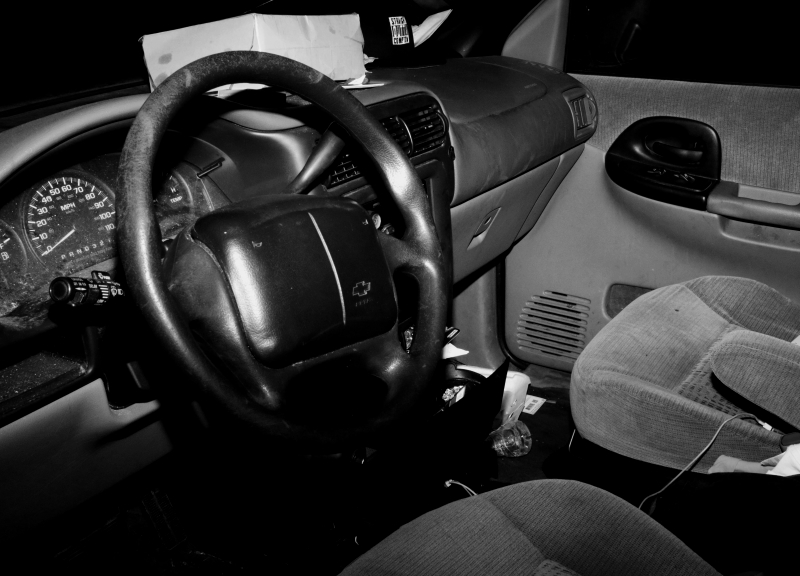 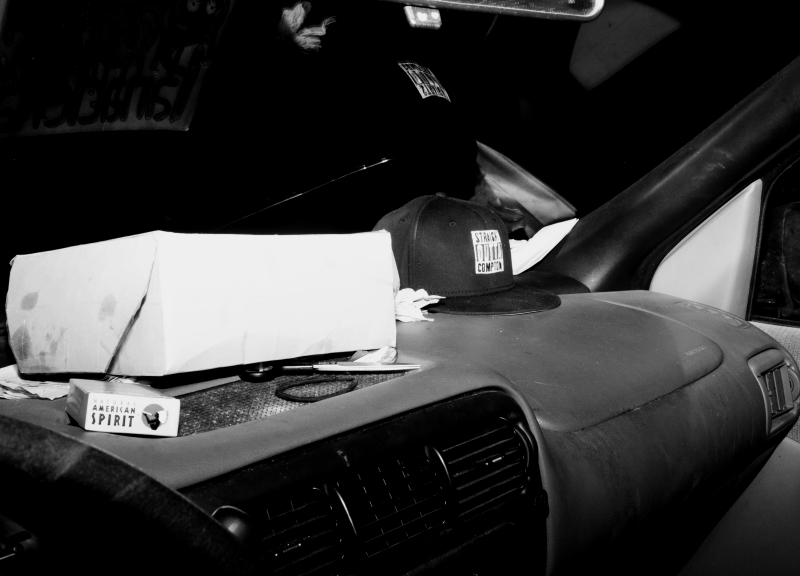 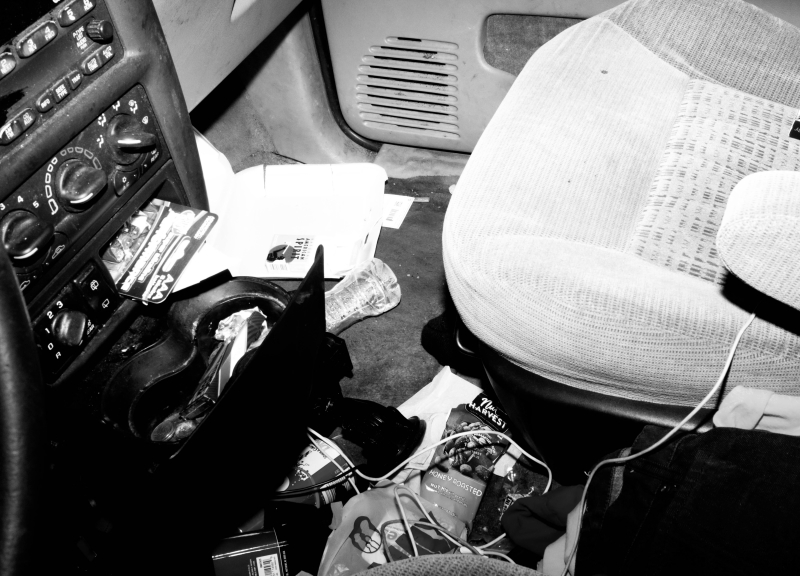 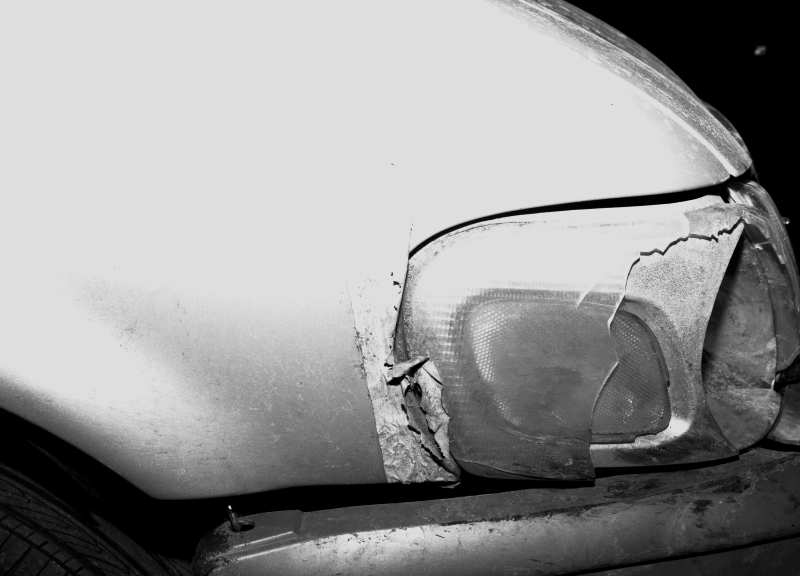 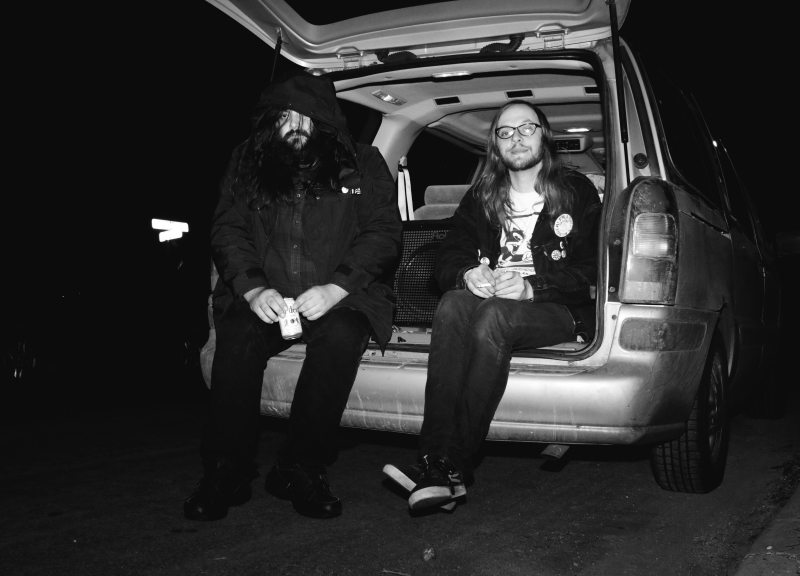