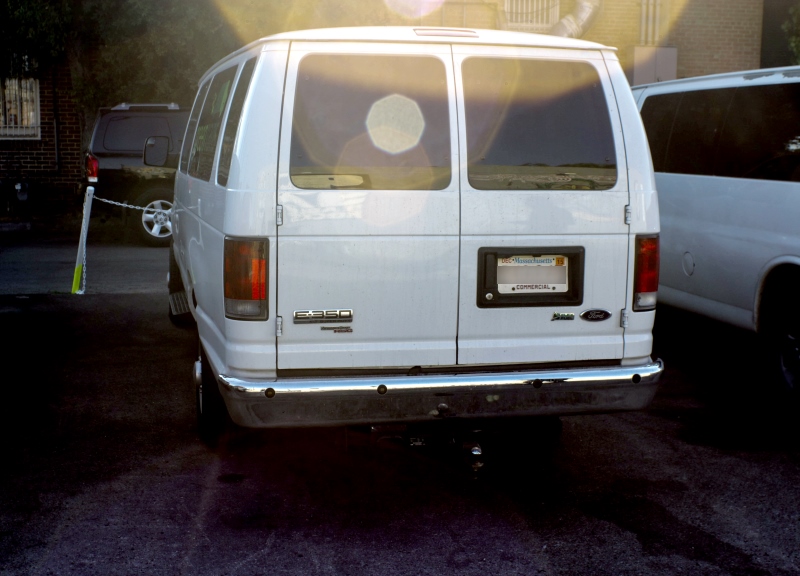 With Big Ups' Rental Van, There's No Static At All.

Big Ups is first and foremost a punk band. Calling Brooklyn home, each member strives to pour their northern suburban upbringing in everything they do. The result is a loud, vile burst of energy that's almost clean to the touch.

After years of touring, its debut LP, Eighteen Hours of Static is currently blaring on college radio stations across the country. More recently, the band rolled through Dallas in support of that album, where it opened for Toronto noise rock trio METZ at Trees. Like we said after catching that show, that band's latest effort is one that pairs well with Big Ups'.

For that particular tour, the band found itself riding into Deep Ellum in a rental van, as opposed to its usual “risk machine.” As such, the relief on the band's faces could be seen a mile away. And it's true, says frontman Joe Galarraga, there's plenty of merit to touring in a vehicle you don't own.

How Long Have You Been On Tour, With METZ?
Joe Galarraga (vocals): “We met up with them in Milwaukee, I wanna say at this point, two-and-a-half weeks ago. It's hard to keep track of the exact days but something around there.”

Have you named the vehicle you're currently touring in?
Joe: “Oh wow, no actually we don't. I guess we just call it The Green Van because it's the company that's renting it to us, so it's just kind of been dubbed The Green Van. Our old van that got stolen — Rest In Peace — was named Trey Bluford because it was a blue Ford. We also, every once in a while, will tour in a RAV4 we've dubbed RAV4 Shankar named after Ravi Shankar. So those are the names for our touring vehicles. Past and current.”

How Long have you had The Green Van?
Joe: “So at this point, three-and-a-half weeks. We got it two days before we left for the tour.”

It being a rental, you're not technically allowed to modify it, but is there anything you've been able to do to The Green Van to make it your own a little bit?
Joe: “We haven't done too much. We have a power inverter on the inside, though, so that we have a 120 V plug so we can charge phones and computers and stuff. [Drummer] Brendan [Finn] and [bassist] Carlos [Salguero] like to lay in the back and watch movies and keep up with True Detective and stuff like that. It's a mobile charging phone station that we also use to get to the gigs I guess.”

Do you have any good breakdown stories or anything like that?
Joe: “Yeah, we had one unfortunate incident. We were playing — actually it was in Portland with METZ — and our van was parked two blocks away from the venue, in what seemed like a pretty nice neighborhood, but somebody smashed one of the windows and took my clothes and Brendan's clothes. Everything else was in the venue because we were playing, and so they just stole a bag of our clothes. We were left with only what we were wearing, so we went to the Goodwill the next day and went to Target to get new underwear, and so basically everything that I've been wearing is stuff I've just bought. I didn't have to do laundry, but it's definitely a pain in the ass.”

How'd you end up with this van?
Joe: “Well, mainly, we chose it because of its space. We have the two backseats taken out and we can fit all the gear in it. And then there's the driver and someone sitting shotgun and then everybody else has their own bench, so it's really comfortable. That was the main thing. We probably could have crammed into something smaller like a minivan, but if you're not driving or not navigating in the shotgun, you basically have a bed to lay out on. There's pillows inside and everybody's pretty cozy. Also, because it's a rental, it's like — we've put 5,000 miles on it I think since we started this tour or something like that — but it hasn't broken down because it's not ours. That's also a part of it. When we get back from this tour, we don't have to pay insurance or anything, we just give it back, like 'Alright! Bye!' We don't have to deal with the insurance and parking and potentially having our van stolen again like what's already happened. Plus it's got a trailer hitch that haven't been used. It's a pretty young van. We've killed a lot of bugs, though. It's been pretty disgusting.” 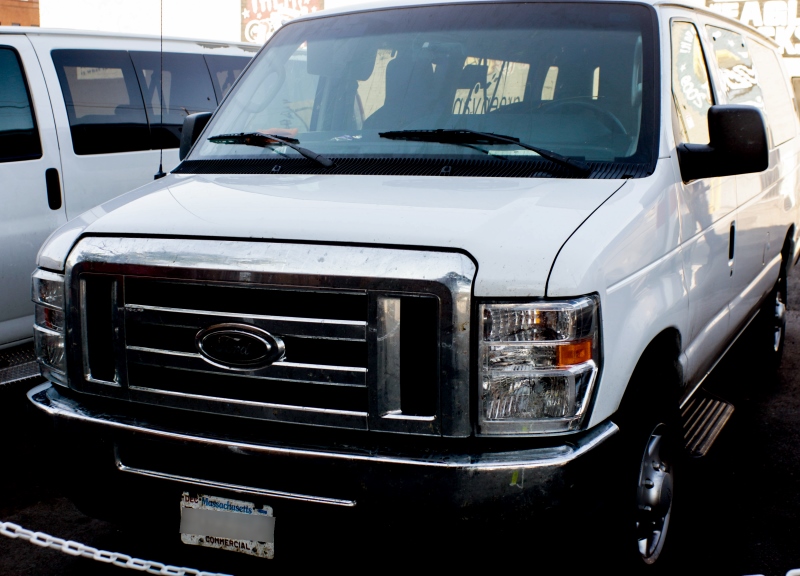 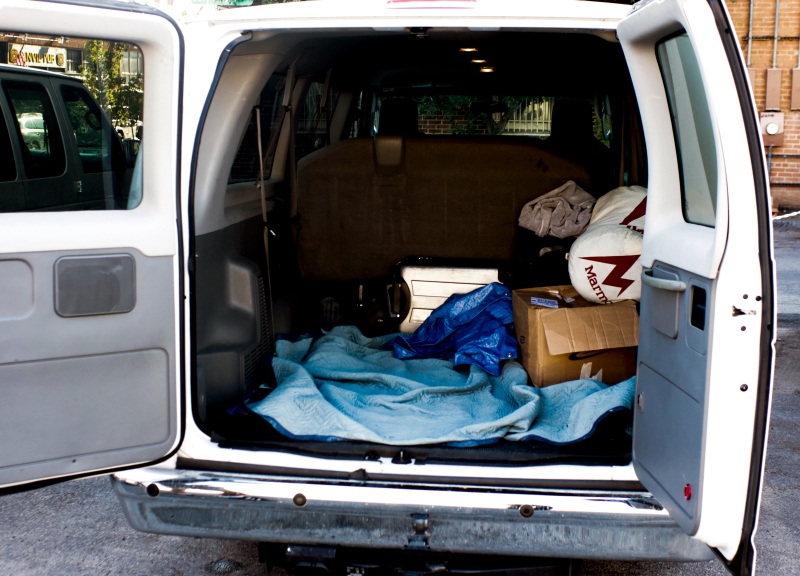 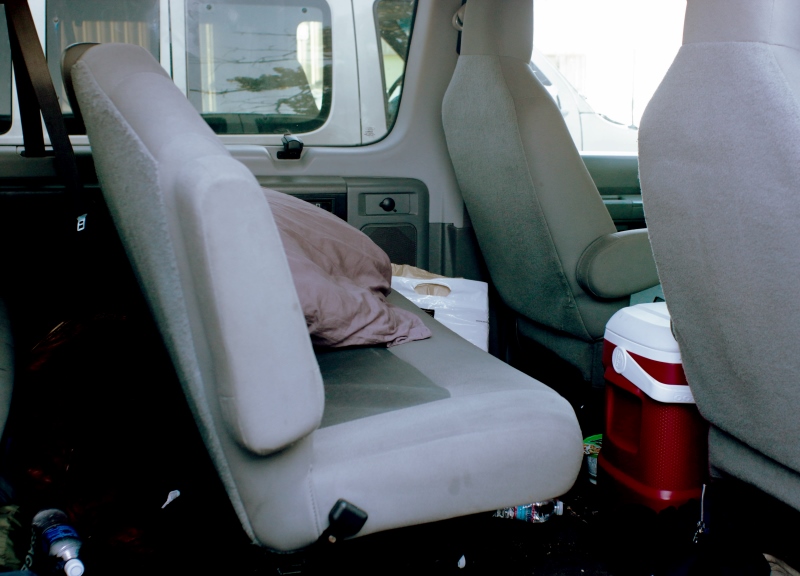 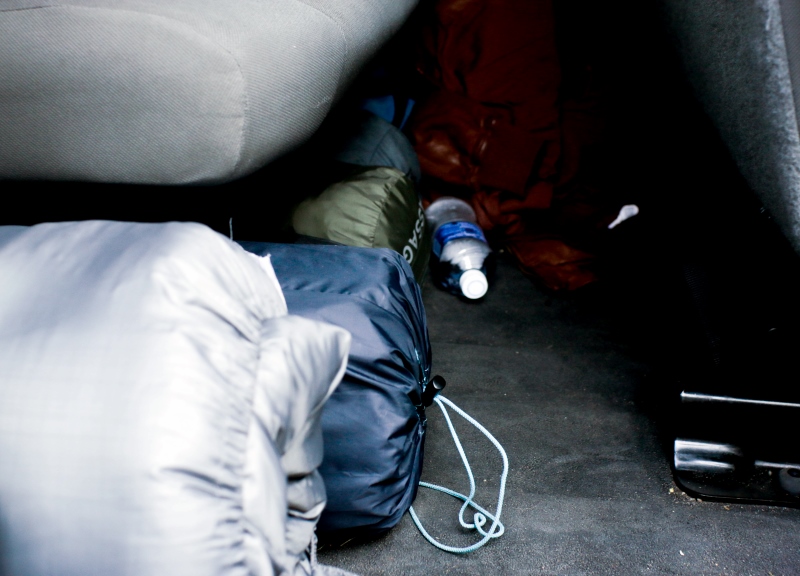 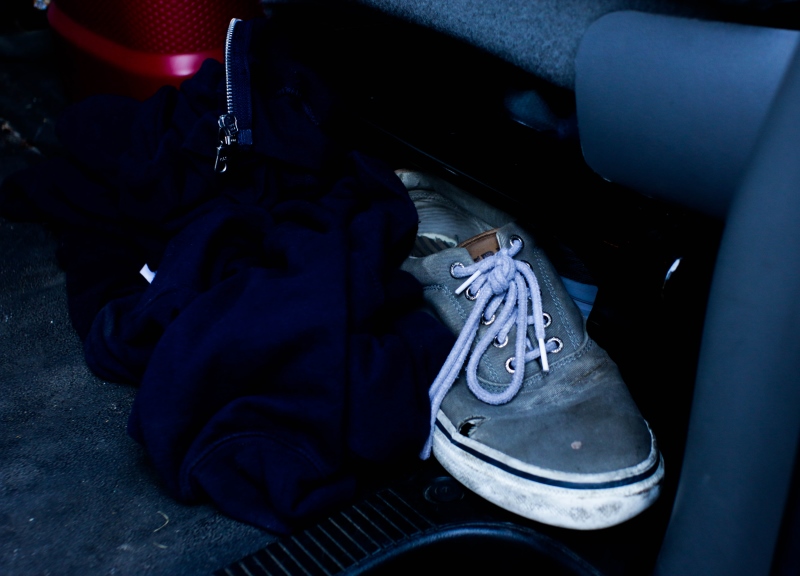 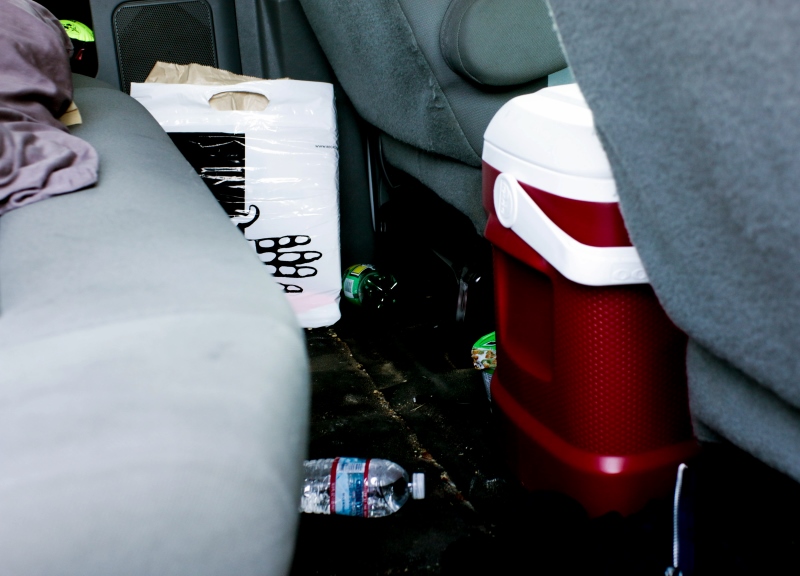 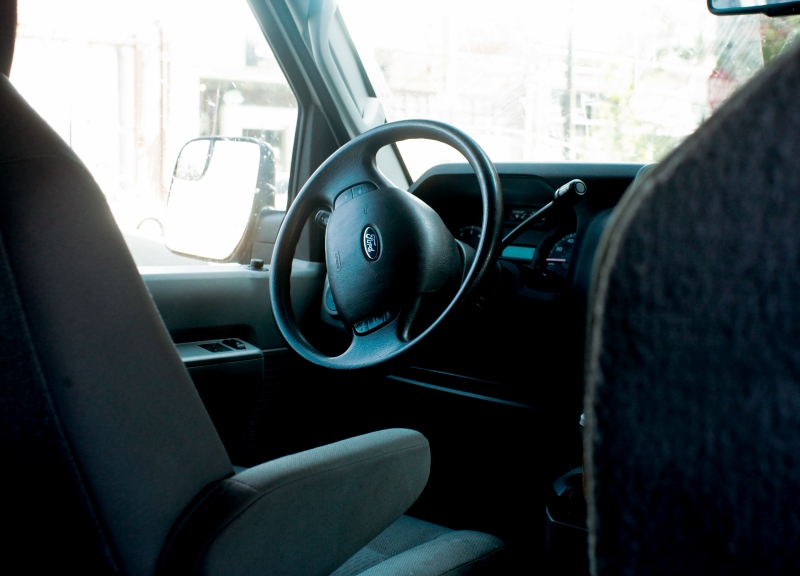 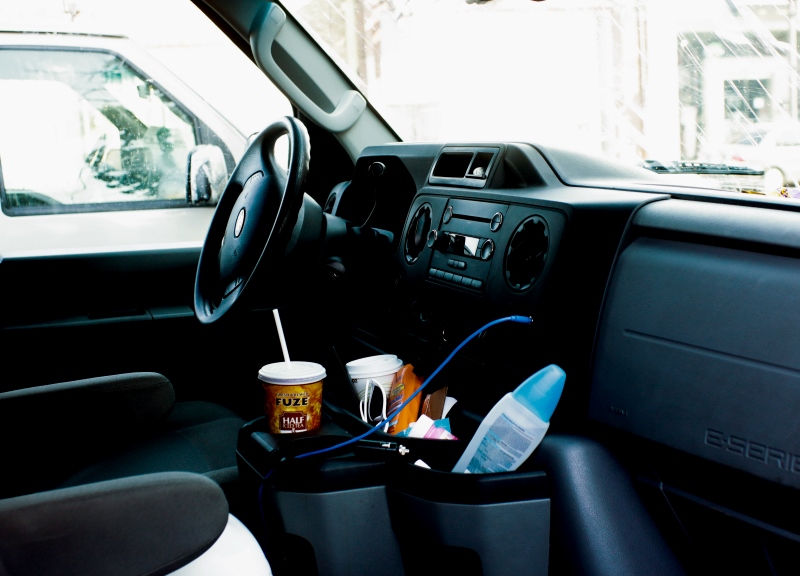 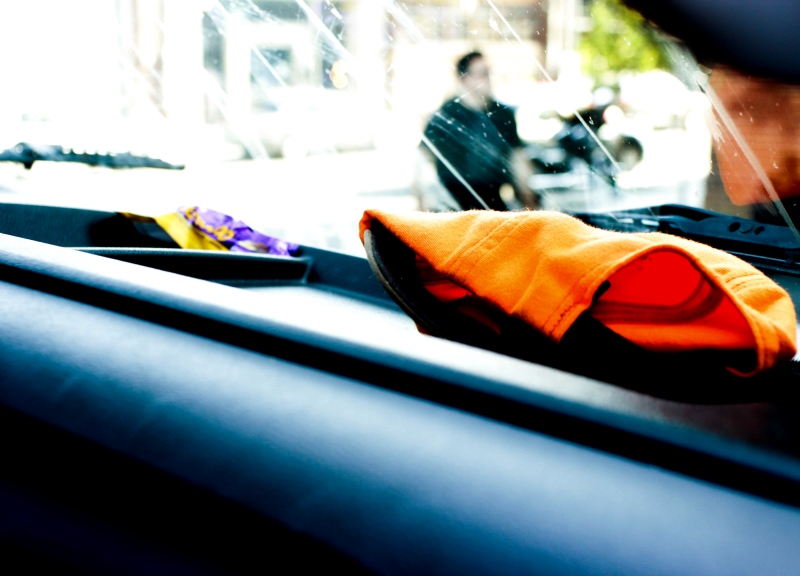 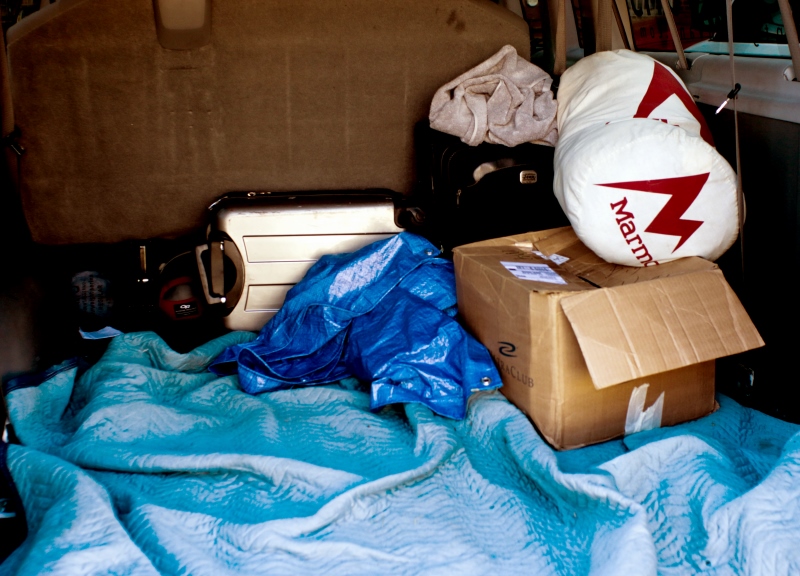 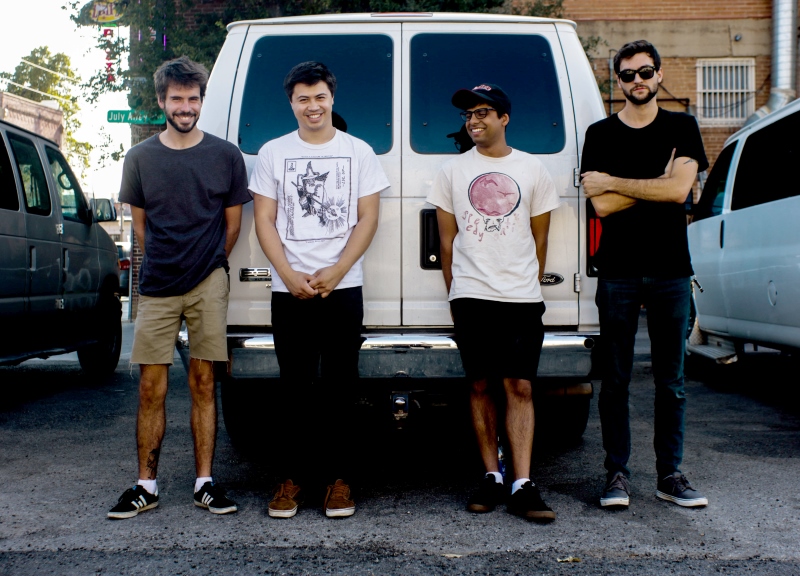