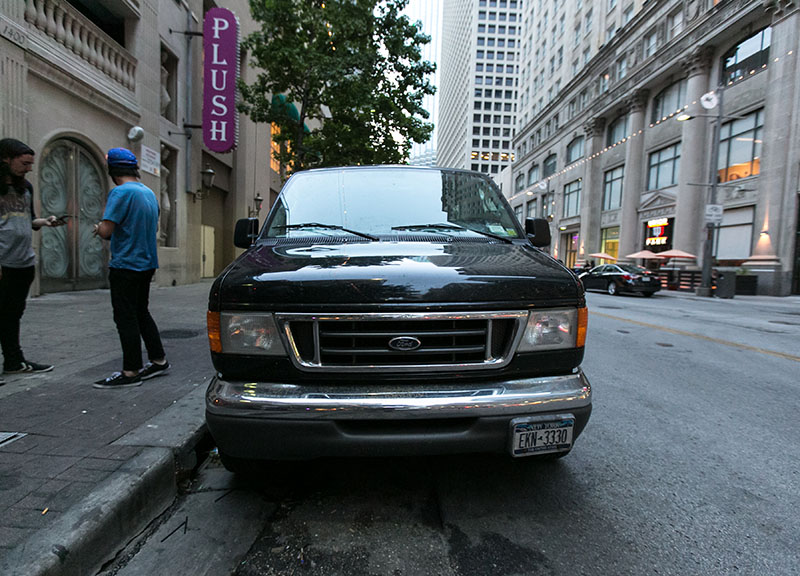 PAWS Are Wasting Away In Their Loaner Van.

PAWS is a three-piece punk band from Scotland that has built its sound on everything that made '90s punk bands great. The band's lyrics are melancholic and its song structures are simple. In the first four years of the band's existence it has released two, generally well-received LPs and spent the majority of that time on the road supporting them.

Even with all that, though, the band may be known best for an incident involving one of the UK's best known artists. Earlier this year when PAWS and We Are Scientists were booked to play in a smaller room in the same venue Morrissey was also playing that night, Morrissey attempted to get the bands' show cancelled. Once a few Facebook posts and tweets from PAWS and We Are Scientists about the incident went viral the venue agreed to host PAWS' show after Morrissey's show ended to resolve any conflict.

Anyway, PAWS is currently on tour in support of its Youth Culture Forever LP, released earlier this year. We caught up with the band before its show at City Tavern last night where we opted to ask them about their van and not at all about Morrissey. Among other things, we learned the band's too poor to learn how to drive. Oh, and they are pretty obsessed with Jimmy Buffet at the moment, too.

Tell me about your van's name.
Phillip Taylor (guitar/vocals): “We haven't really come up with one actually.”
Ryan Drever (bass): “Everyone calls everything they ever have Betsy or something like that.”
Josh Swinney (drums): “Oh, I say ours has gotta be something like Craig.”
Ryan: “No.”
Josh: “Margarita.”
Ryan: “Oh yeah, hell yeah. Margarita.”
Phillip: “We listen to a lot of Jimmy Buffet.”

What's the mileage on the van?
Phillip: “It's pretty pathetic actually. It's really low compared to our last one. This is our first tour in the US with a different van. We used to have an exact replica of this one but we put it over the 300,000 mile marker. Now we have this guy and we're not really sure.”
Ryan: “This is like 160,000 or something like that.”
Phillip: “It belongs to our record label.”
Ryan: “The guy who runs the label, Adam in the states, it's his van, I guess. He hires it out to all the bands out on tour on the label.”

Who usually does the driving?
Ryan: “None of us drive. Our friend Harrison, we took him over here. We used to have a really close friend of ours called Brandon. He does lots of stuff for bands. He took us out on every tour except this one, but he couldn't make this one so we got our friend Harrison.”

What's the reason you guys don't drive?
Phillip: “Too poor. It's really expensive to learn to drive in the UK if you don't have rich parents who give you everything.”
Ryan: “We don't have Driver's Ed or whatever it's called here.”
Phillip: “It cost like $70 for a lesson to learn to drive in the UK so that's like £50 to get one lesson — and when I was growing up I just spent money on records rather than learning to drive. The people in school who learned drive, it was because they had rich parents who were funding them to do that, and they'd get a car for their 21st birthday.”
Ryan: “And drive to school around the corner.”

What makes this van special compared to other vans you've toured with?
Ryan: “We've haven't broken it in yet. It's getting there but it's still fairly new.”
Phillip: “Yeah, this is a pretty good van. It's comfy. Although, I feel like the suspension is almost too 'pimped.' Because it literally bounces everywhere. Everything bounces around. You can't place anything somewhere that's not locked in because it just slides around.”
Ryan: “It's weird because it's almost the same van as an E350 or whatever but this one is way worse for the suspension thing. It's fucked up. We feel everything. It's like when we go over those rumble strips or whatever you guys call them over by the emergency lane? Sometimes Brandon will drift into it and if you were asleep you'd just be like “CR-R-R-R-AAHHH.” It's like fucking machine guns firing.”

Do you have to be careful with this van since it's a loaner or is it just bring it back however?
Josh: “No, we have to be careful with it. It's in pretty good condition but we'll just tidy it before we get back. We can make it as messy as we want while it's on tour but bring it back in the same state.”
Ryan: “We trash it as much as anyone else would in its possession.”

Do you guys have any favorite memories in this van, or any past van?
Josh: “It's pretty much the same van. It feels like the same van.”

Yeah, a van's a van.
Josh: “A van's a van? That defeats the whole purpose of your interview! You just bankrupted yourself, my friend.

A van's a van, but it's the people in the van that make it special!
Band: “[laughs] Oh yeah!”
Ryan: “We've got quite a lot of memories but I think the biggest thing we had was we're trying to recreate a little with this one is that Brandon had a massive cooler…”
Josh: “One of those Igloo ones. The giant one with a tap on the side and stuff like that.”
Ryan: “So we would fill that regularly with beers and shit and if we had rider left over we would just crank that shit in and driving, especially through like California and shit where it was so hot, we'd be like, 'Right, fuck it, I'm just gonna have a beer!' So I'd just reach over the back, but I hated being the one closest to the back because I'd get asked every two minutes for a fucking drink or something.”
Josh: “I like being the barman.”
Ryan: “It was cool. And the two backseats, because there's only the four of us we got the driver, someone in the front so the two bench seats you can just pretty much lie back looking at the fucking California scenery, sipping a beer.”

Has California been your favorite scenery so far?
Ryan: “I don't know. Going through Arizona was really cool.”
Josh: “It's too much to even quantify. Being from Scotland it's like every day is fun driving around here.”

Is there anything else you'd like to tell us about your van?
Ryan: “I wish it was a bit more haggard, so that we could make it our own a little bit. It feels a little bit more precious because it's newer even though it's a still technically kinda old.”
Phillip: “It's just bizarre because the other van that we were in which is an exact replica of this one — that guy just has so much history. It's sad that we didn't do this interview the last time we were here because that guy had serious memories. So many bands have toured in that van.”
Ryan: “Animal Collective was in that van. Bjork was in that van at point.”
Phillip: “So many bands and now we have this guy, or her, and it'll get to that point.” 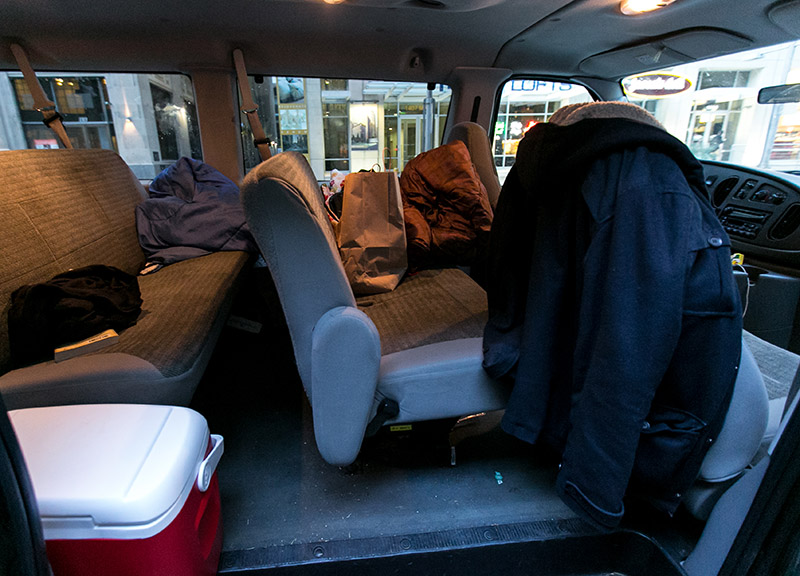 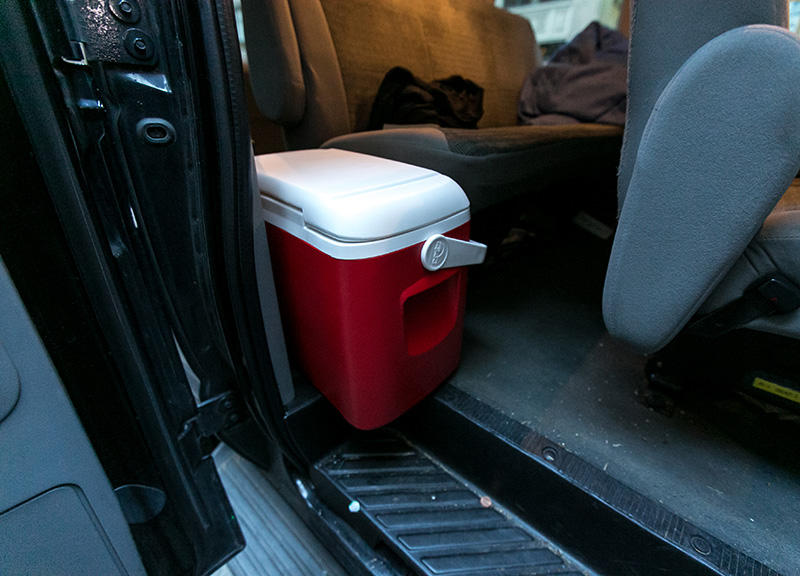 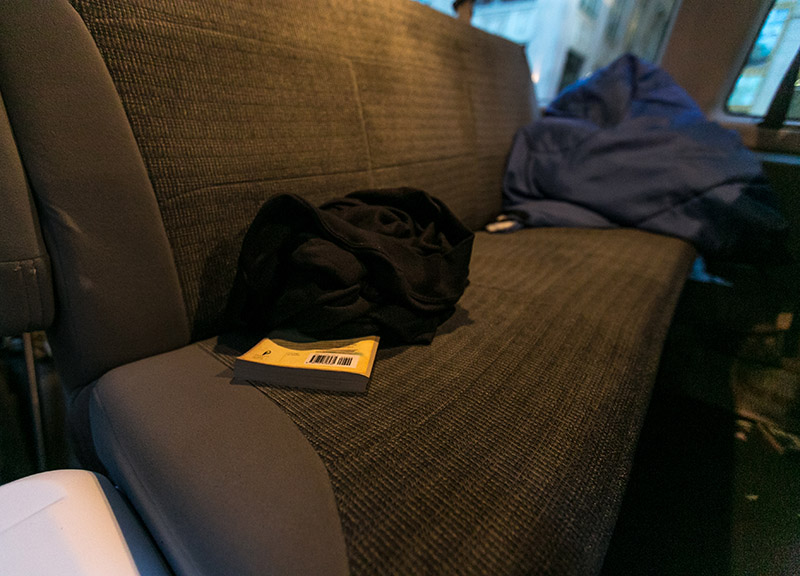 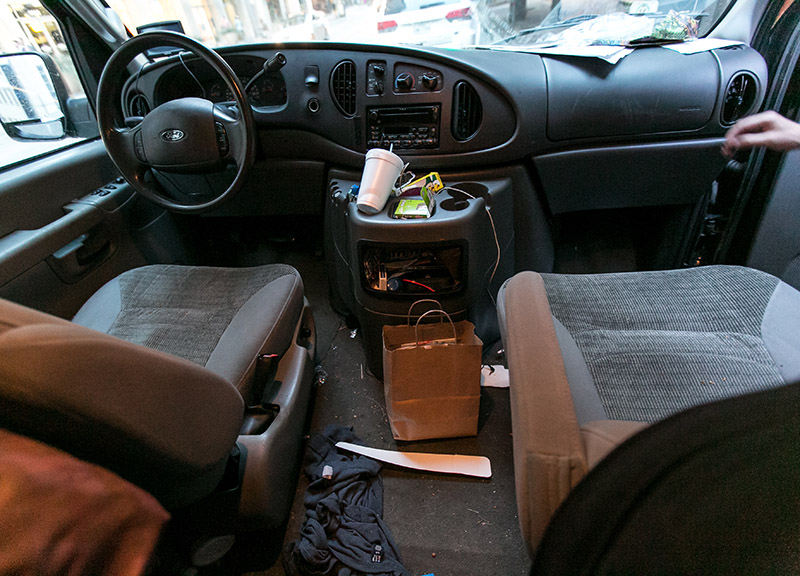 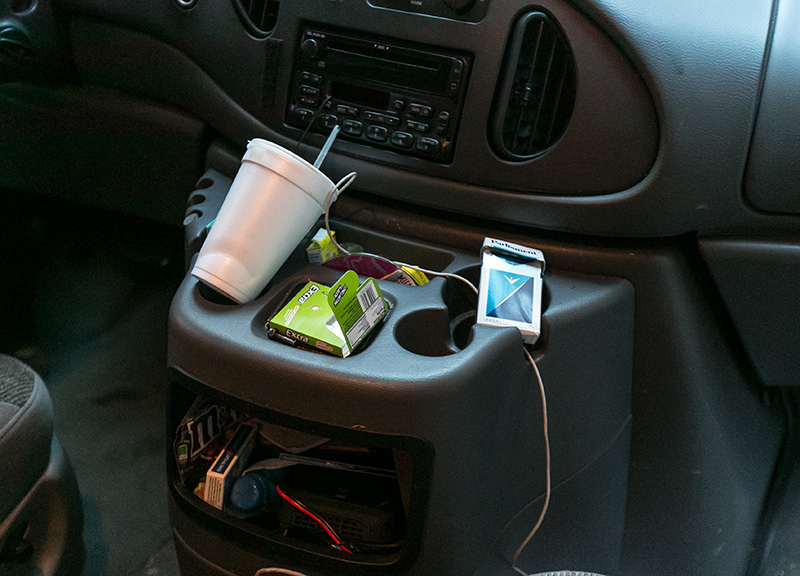 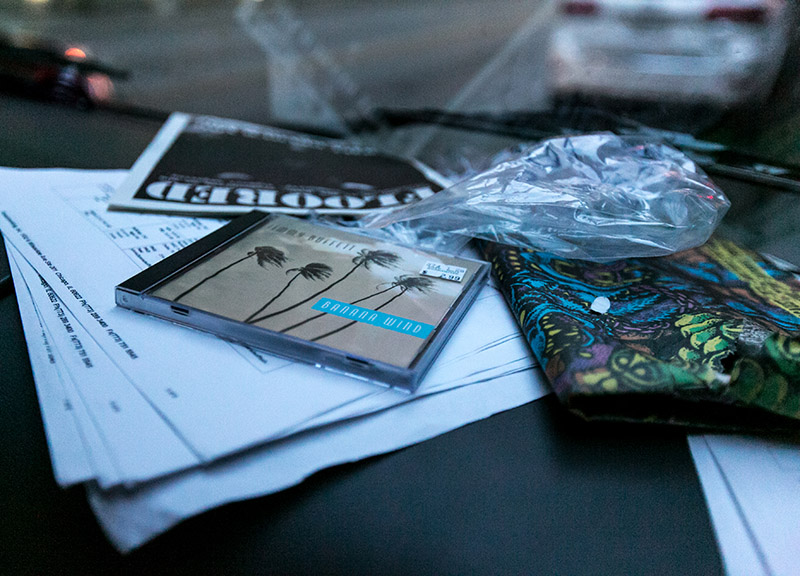 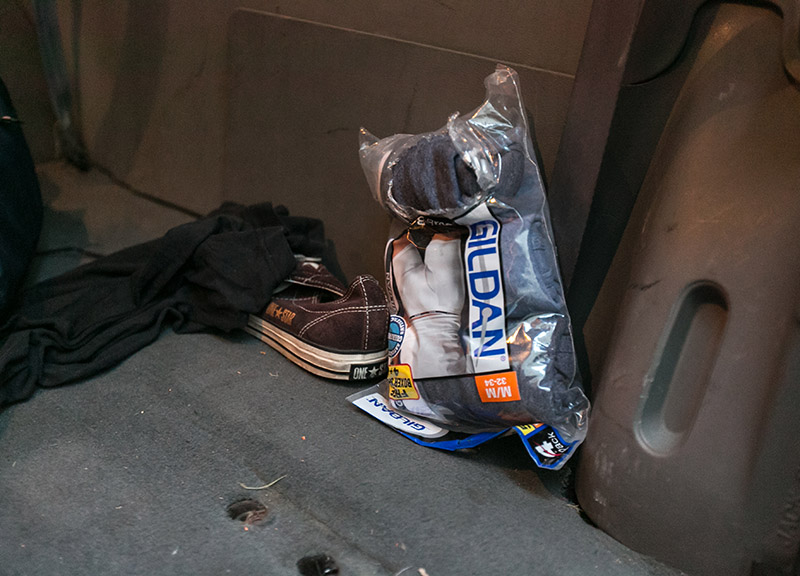 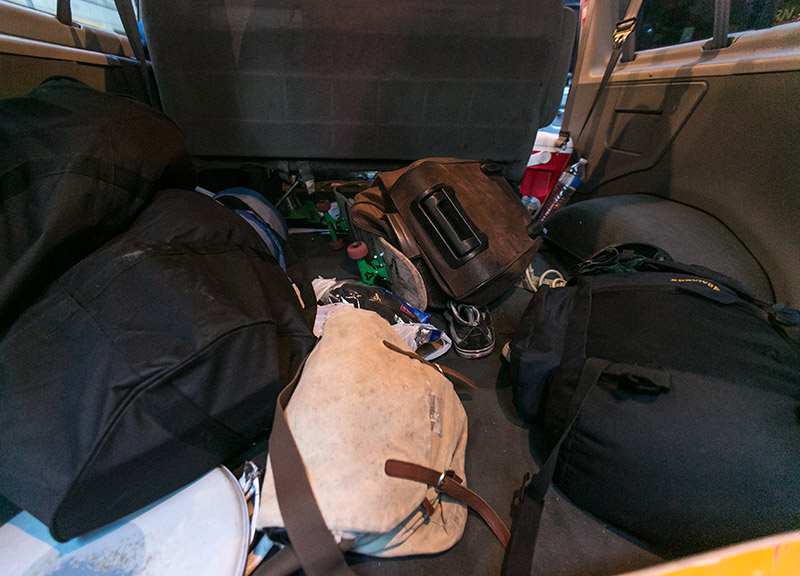 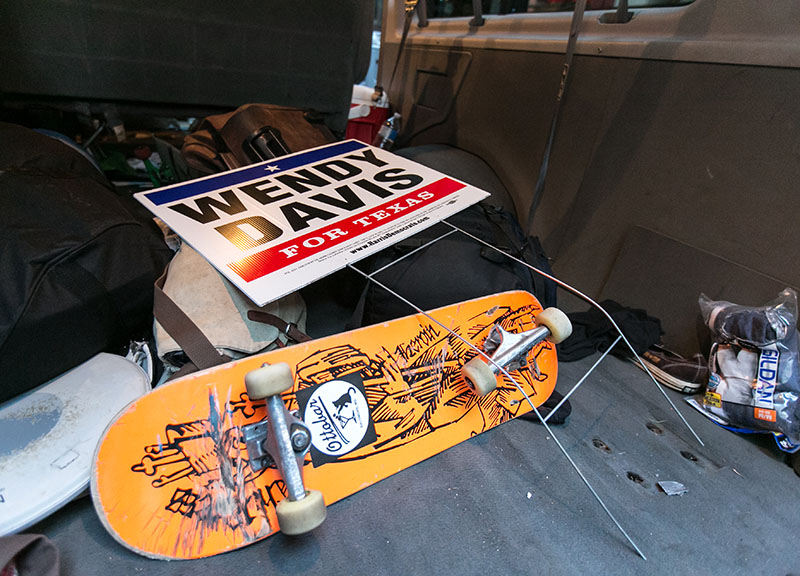 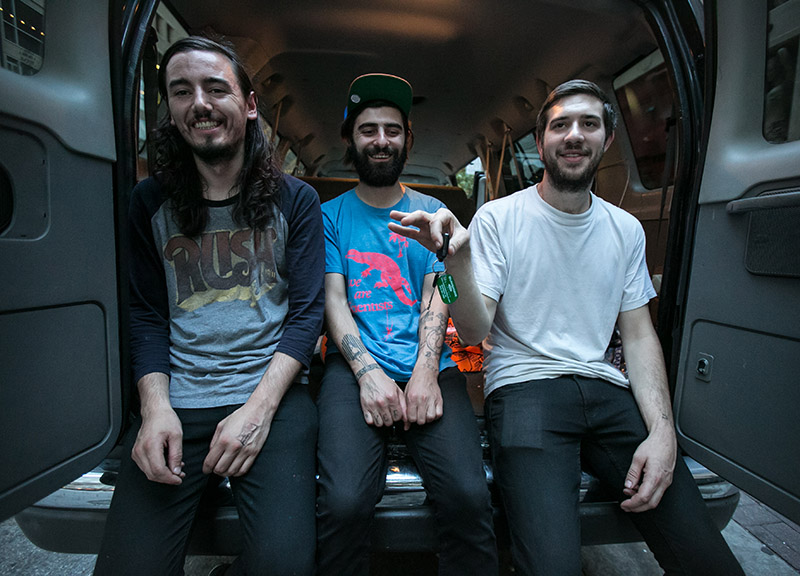 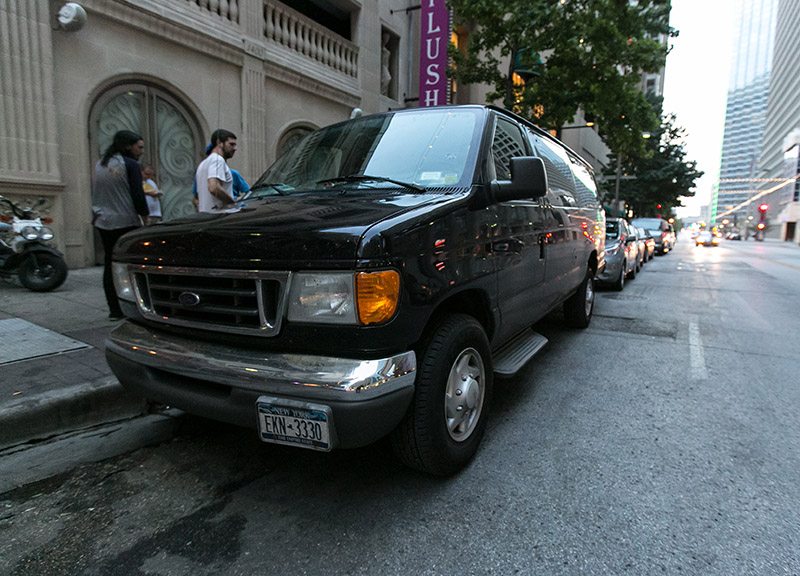