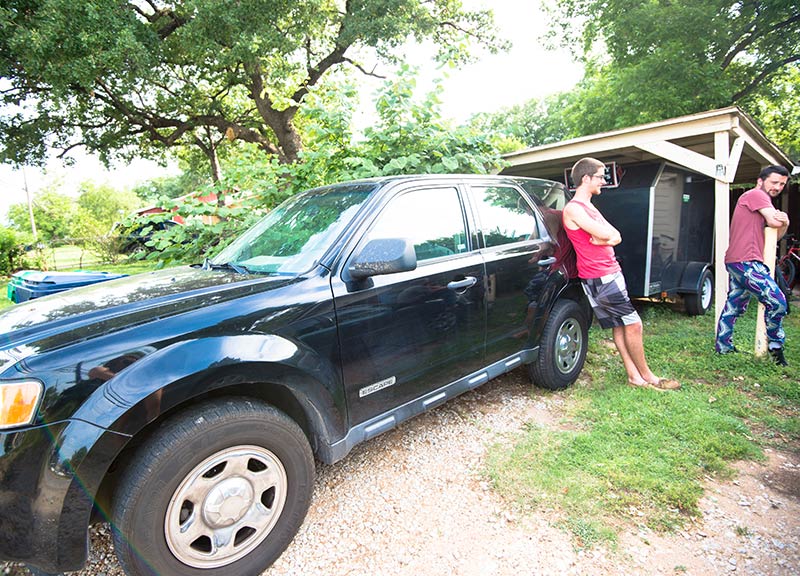 Behind every great band is a great van. And when these former church vans, daycare buses and plumber's work vehicles have racked up enough miles on the road, they eventually start being thought of by the band as another member of the team. Hey, we get it: It's hard to spend so many hours with bandmates (both human and machine) without a few things getting broken, a few good fights taking place and lots of great memories being made. We hope that, by exploring these stories, we might get to know some bands from both North Texas and beyond on a more personal level. Check out this feature's acrhives here.

If there's one area that Denton completely and utterly desimates the other corners of the North Texas music scene, it has to be in their ability not only to throw hassle-free house shows, but to keep well-known house venues up and running for years at a time. The interesting thing is that the bands playing these shows aren't the kind of no-name acts that lack the credibility to play at any of the larger venues on the square either. Any given weekend it's not unreasonable to find acts like Terminator 2, Deep Throat, New Science Projects, or Senor Fin playing in a Denton living room.

And in the case of Senor Fin, when they're not playing more traditional shows or touring regionally, there's a good chance they'll be throwing a show at their own house. The band seem to thrive from a heavily DIY ethos, and it shows from their artwork, living situation, proclivity for playing house shows, down to the music they create.

We recently caught up with the band at their house/venue/practice space as they were getting ready to take their gear to Dan's where, later on in the night, they'd open for Pageantry's EP release show.

While we found them a pretty accommodating bunch, they were pretty strict with where we were and weren't allowed to smoke.

Band Name: Senor Fin.
Van Name: “The Hut. We used to have a Pizza Hut sign on top, but now it's a Jimmy John's. People will see it and think this whole thing is full of sandwiches.”
Year/Make/Model: 2008 Ford Escape.
Mileage: 85, 077.

Where did your van come from? How did you acquire it?
Mason Lynass (drums): “This is what I carry drums in usually. When we go far away then we just hook it up to the trailer. I got [the car] because we had a family car back in Colorado. My brother is driving it now. I needed something to carry drums around in, so I got this used.”

What makes your van special, i.e. what are its best and worst features?
Jesse Botello (bass): “We're not allowed to hotbox it.”
Mason: “Yeah, we cannot hotbox in this car.”
Jesse: “Thus the rule.”
Mason: “I don't like it to happen all the time because I don't want it to smell like that all the time. It's kind of nice that all our sleeping stuff and all our day-to-day things can fit in the trunk so we don't have to get in the trailer for it. It's big enough to haul a trailer but also big enough to carry our stuff in it too.”

Who usually does the driving?
Jesse Miller (guitar): “Mason.”
Mason: “I do.”
Jesse: “Not by choice.”
Mason: “I don't like people driving my car. We went to Houston one time and I didn't know I had mono, but I had mono. We had to drive back overnight because I had a class the next day and I could only drive for like an hour, so I let the other Jesse's drive. But Ronan [Delisle] can't drive because he can't drive a stick.”
Jesse: “And he's not going to learn anytime soon.”

Fair enough. You don't get to drive, but you don't have to drive either.
Ronan Delisle (guitar): “I mean, I'm OK with Mason driving everywhere.”

Do you have any good breakdown stories?
Mason: “The car itself hasn't. We had a trailer lights issue when we were leaving for our last little tour thing. Apparently they were out and we didn't know they were out, so right before we went on the highway someone ran into us very gracefully and told us. We should have gotten them fixed before we left but we waited until we got to Austin.”
Jesse Miller: “Well, we had to be there early the next morning.”
Mason: “We left on Monday night and we got them fixed on Thursday.”

That sounds safe.
Jesse Botello: “We put bike lights on the back.”
Mason: “And with the trailer I can't drive more than 70. It's not like I'm hauling anyways.”

What are your best memories from being in the van?
Jesse Miller: “All of the overnight trips back from Houston are probably my least favorite memories.”
Jesse Botello: “We have yet to play a show in Houston and stay the night there. Whenever we play there we always have to get back for a class or something.”
Jesse Miller: “We always have something.”
Mason: “I feel like trips that we use the trailer for always bring out a different side of us because we're together for so long. Usually we go significantly out of town when we use the trailer so we're in a confined space together for awhile and that brings out a different side of us, which is fun.”
Ronan: “One time I made a peanut butter and jelly sandwich in the car but I didn't have a knife so I used a drumstick.”
Jesse Botello: “We have hotboxed the trailer a few times.”
Jesse Miller: “But not while it was moving.”
Mason: “We get kind of goofy.”

What are some goofy things you've done?
Jesse Botello: “I caved in and bought a Purple Stuff drink that is supposed to make you chill and relaxed. I bought one and just chugged it. I fell asleep.”
Mason: “In that situation more things are funny. Things that you normally wouldn't think are funny are hilarious.”
Jesse: “We were driving back from Houston and we were stir crazy. Mason was having a complete sing-a-long to like Rush.”
Mason: “You guys were all asleep. Ronan was half awake. I was just singing classic rock to people to stay awake. That's what I grew up on so I still knew the words to every song.”
Jesse Miller: “Every Senor Fin road trip requires a Rush jam out session.”

What are the best modifications you've made to the van, decorative or otherwise?
Mason: “The DATCU stickers. We wrote Senor Fin in the dust on the side. But we haven't really done much artistically.”
Jesse Miller: “I think The Hut was the best edition, and then somebody stole it.”
Ronan: “We're holding off on the Nitrous.” 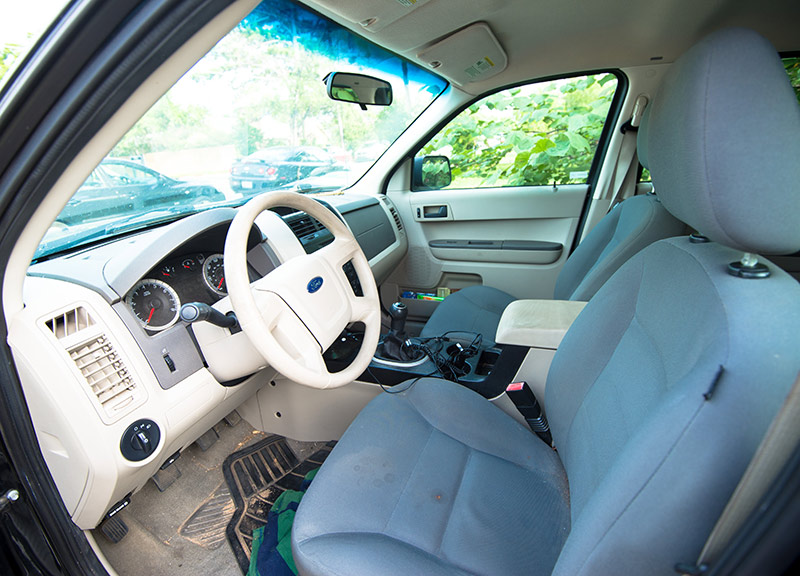 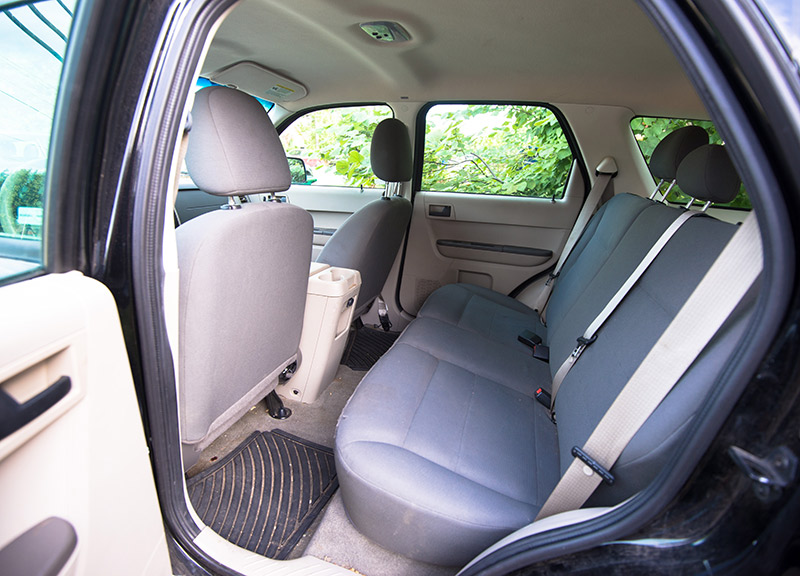 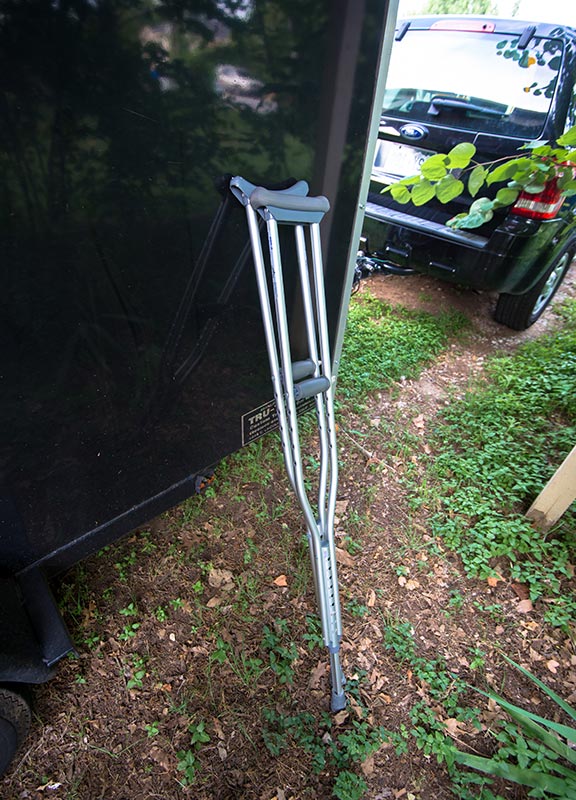 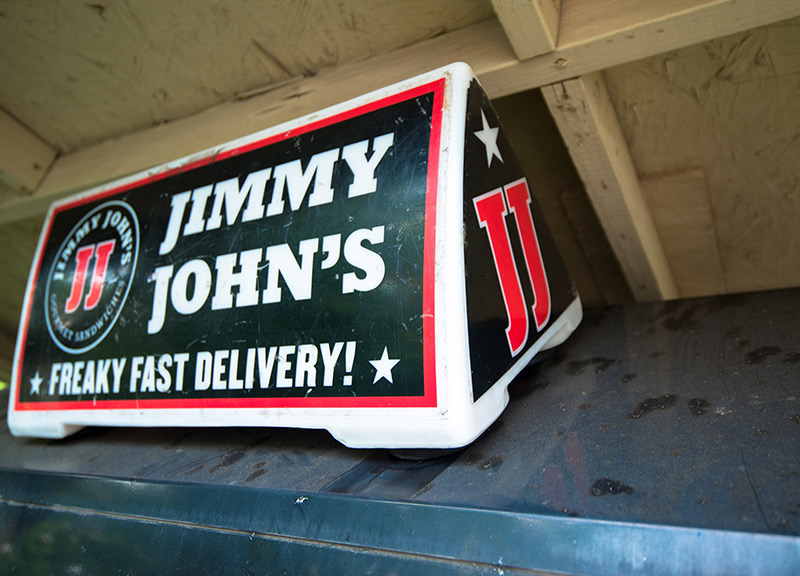 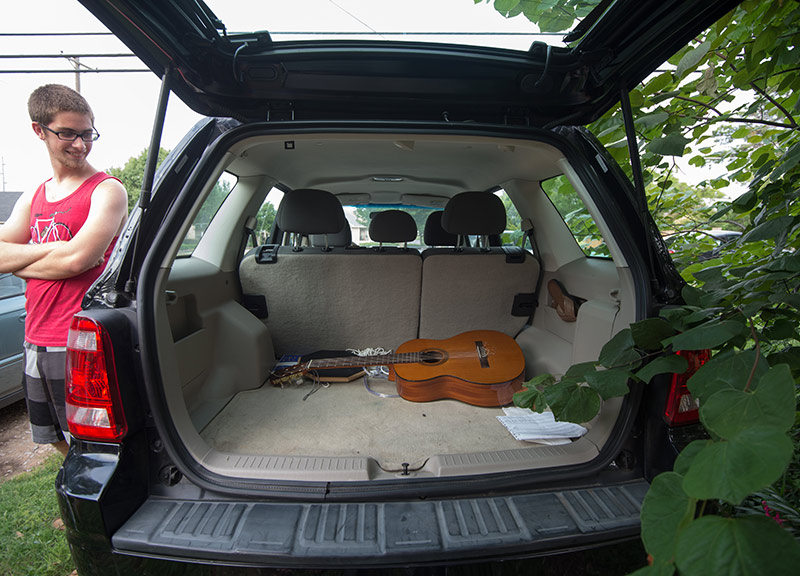 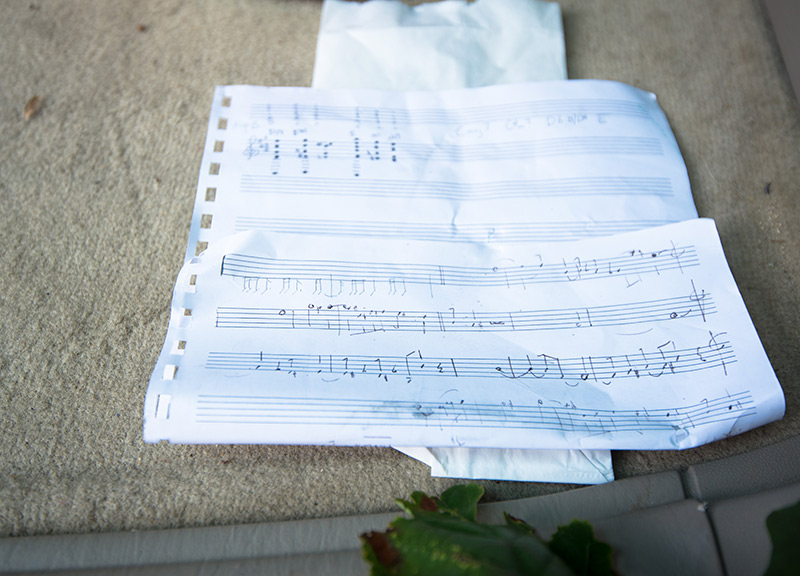 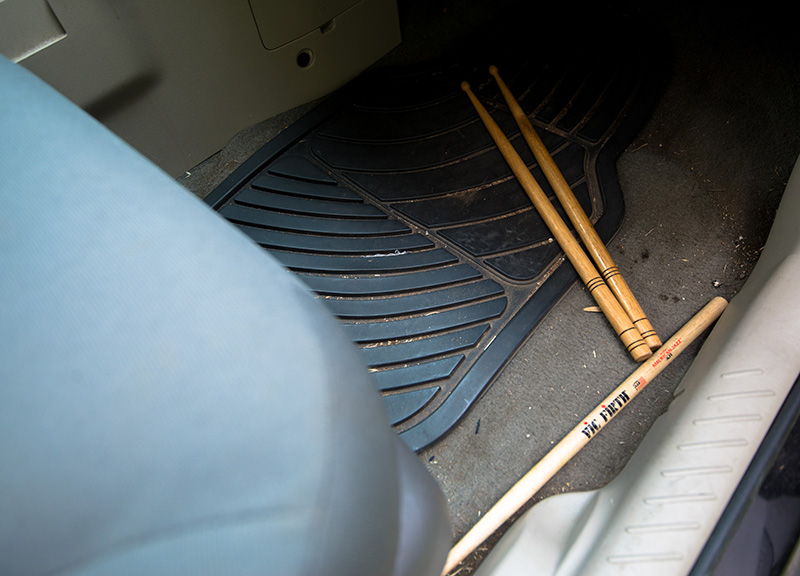 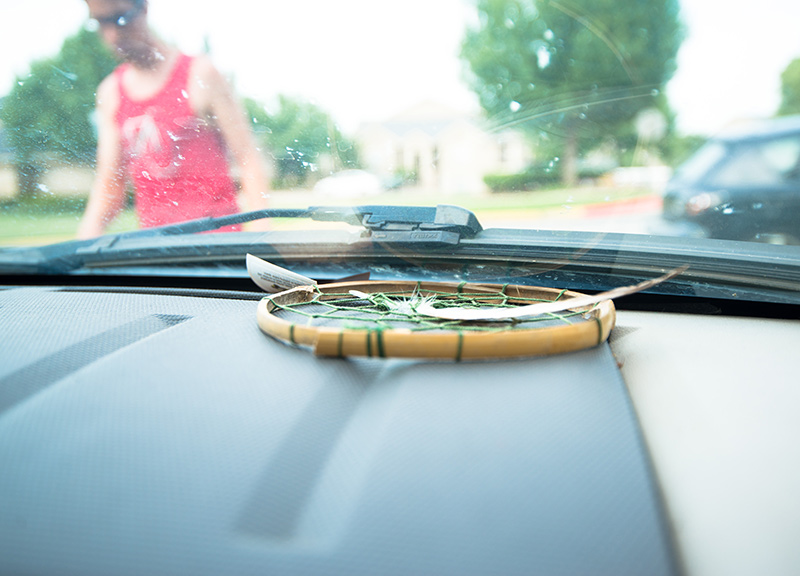 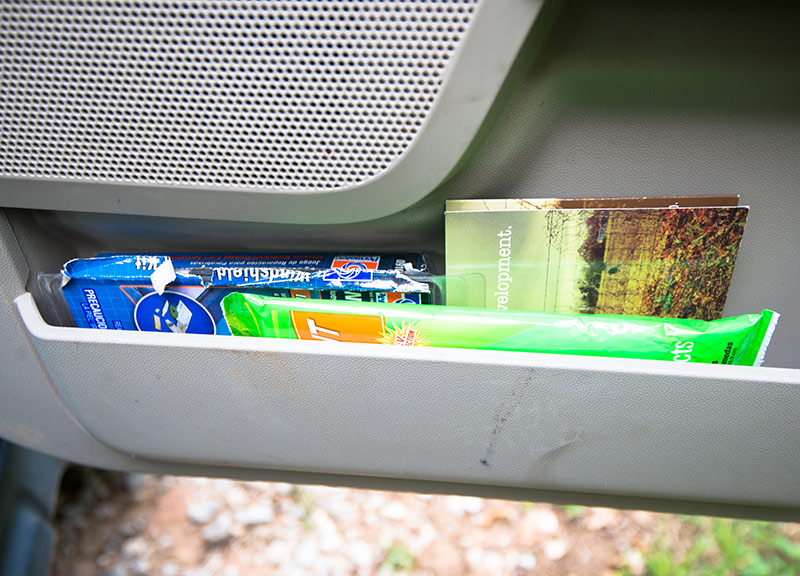 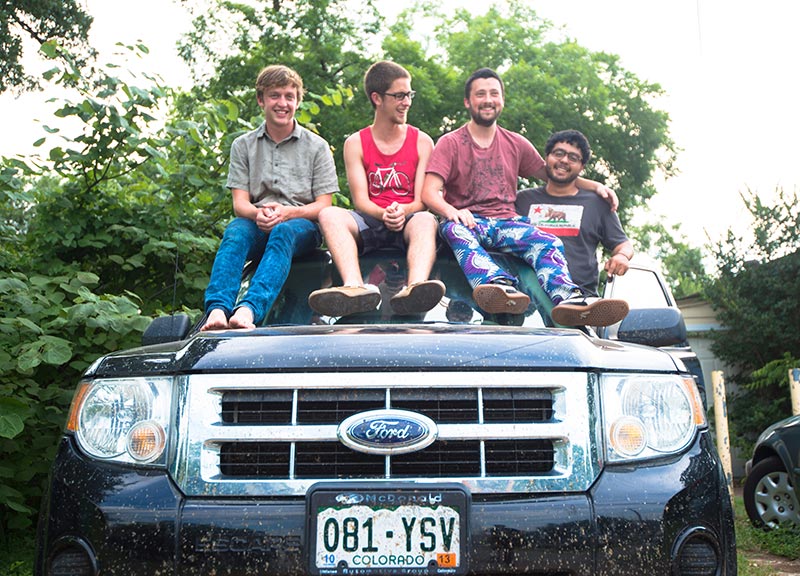