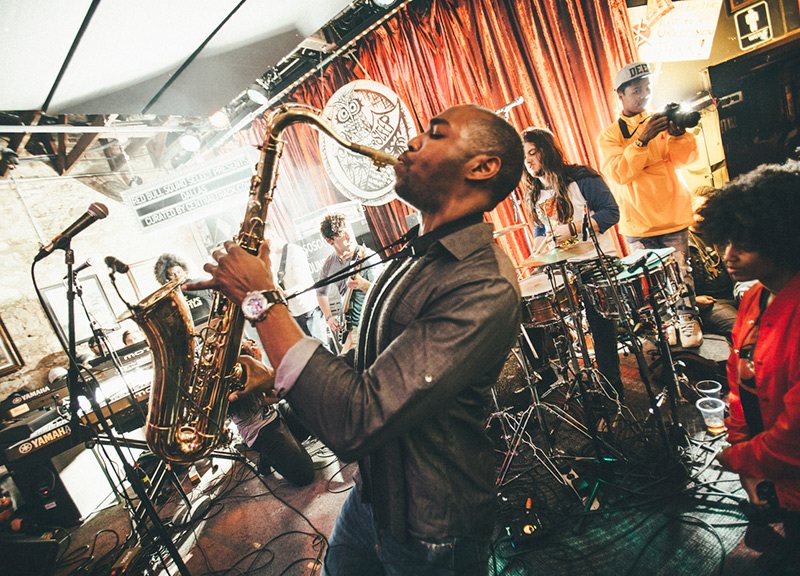 Mix Magyk — “Inevitable.”
RIYL: Instrumental tunes, sexy sax men, action and/or adventure.
What else you should know: Remember that jazzy live band that backed -topic when he opened for Thundercat at Three Links last year? Well, sans the vocalist/rapper, they go by the name Mix Magyk and they're usually good for a Facebook update once or twice a year. But when they do post, it's usually something pretty great — such as this newly released instrumental tune. It's damn near seven minutes, and feels even longer, because it goes so many different places you'll swear you just listened to the entire score of the hippest spy movie you've never seen. It's a trip and a half.

Parquet Courts — Human Performance.
RIYL: Pavement, Velvet Underground, the most-quintessentially-New York-iest shit you've ever heard.
What else you should know: No matter how much material these verbose Denton expats seem to release — what's it been now, five LPs and two EPs in less than five years? — they never seem to suffer a misstep. Every album is slightly different, yet so distinctly Parquet Courts. The band's brand new LP, released today, is no different. It's just one more bit of evidence proving that the Last Great New York band is probably the best rock 'n' roll band anywhere right now. Catch them at the Granada on April 28.

Andrew Jones — No.
RIYL: Holding the line, coming out and playing.
What else you should know: Denton's Andrew Jones calls himself a guy you've almost heard of. Per his bio, he was tapped by Toto's Steve Porcaro to write for Michael Jackson's ill-fated 2008 comeback album. When that didn't happen, he quit music for a few years. He returned last year to record a pop-punk song about J.J. Abrams that featured the Offspring's Pete Parada on drums. Today, he's back with his debut full-length, a more subdued indie-pop kind of thing.

Coolboy 3000 — Hard_Ware.
RIYL: Websites.
What else you should know: It's almost as hard to find out anything about Coolboy 3000 as it to navigate the Angelfire-like website he built to post his tunes. Still it's worth poking around over there, though, if not for the little nostalgia trip back to the time when the dancing baby was about the only cool thing the internet had to offer, then for all the sweet bedroom synth-pop you might discover. Released this week, Hard_Ware is the latest batch, and we've made things a tad easier by just embedding them above — which is way less fun than finding them yourself. Anyway, um, follow CB3K on Twitter for a little more insight into mind of the mysterious local entity.

This Will Destroy You — “Paper Cuts.”
RIYL: Taking it down several notches.
What else you should know: On Record Store Day, long-running indie label Robotic Empire will release Doused In Mud, Soaked In Bleach, a tribute to Nirvana's Bleach, and the third and final of the label's tribute discs to the Nirvana's official studio records. Making the cut for this one is This Will Destroy You, which takes on “Paper Cuts” by making it even doomier and repetitive than the already-pretty-sludgy original. To wit: They've stretched the originally four-minute cut into seven full minutes. They had help in doing so, at least, as the vocals come courtesy of ambient-loving Dallas-area singers Kate Fisher and Lily Taylor.

Lord Byron — “Woodrow Wilson 06-2010.”.
RIYL: Sum 41, Blink 182, Reba, Seal, Back Street Boys, Creed.
What else you should know: There's a few questionable rhymes on here — but for the most part Byron's flow is pretty uhhhh. Not to go unnoticed, though, is the harp-heavy, pseudo-Kung-Fu-sounding beat from Dallas' Fiji God. I had never heard of this cat before but, upon further inspection, there's a lot of really cool stuff on her Soundcloud page — y'know, in case any of you other rappers are interested on making something happen there.

Ignatius — “The Greenest Rain.”
RIYL: IDFK.
What else you should know: Seriously, what the fuck is up with all these mystery producers/musicians posting music to their Soundcloud pages? Are they all secretly the same person? Are they actually real people that even exist? When was the last time that particular marketing gimmick was interesting? Does it matter? Maybe somebody should write a tl;dr think piece about it. Anyway, here's another gem from this set.

Norvis Junior — Pyrrhic Victory Disc 03.
RIYL: Cosmic soul wizardry.
What else you should know: DJ and Josey Records co-owner JT Donaldson also runs the Josey-affiliated New Math Records, which launched in December. Specializing in bedroom funk, one of the label's early releases is this one from Dallas expat Norvis Junior. One of some dozen or so releases that Norvis has recorded in the past several years, this release runs the gamut from space funk to R&B and gospel to experimental — all around an electronic music base. I bet you could probably find a copy or two at North Dallas' favorite record shop if you look hard enough.

Jay Fresh — The Stay Gold Era EP.
RIYL: Spitting hot fire.
What else you should know: If there's an EDM-leaning hip-hop concert — or, hell, just a big EDM show — coming through town, there's a pretty good chance 25-year-old Dallas boy Jay Fresh is gonna score an opening slot. In the case of acts like Gramatik, Paper Diamond and Griz, he's even turned these opportunities into future collaborations. His brand new EP features some really excellent production from Long Beach County's own Nine Deuce and Dallas' Blue, the Misfit. On top of that, his flow is on point and the entire package is just really, really slick.