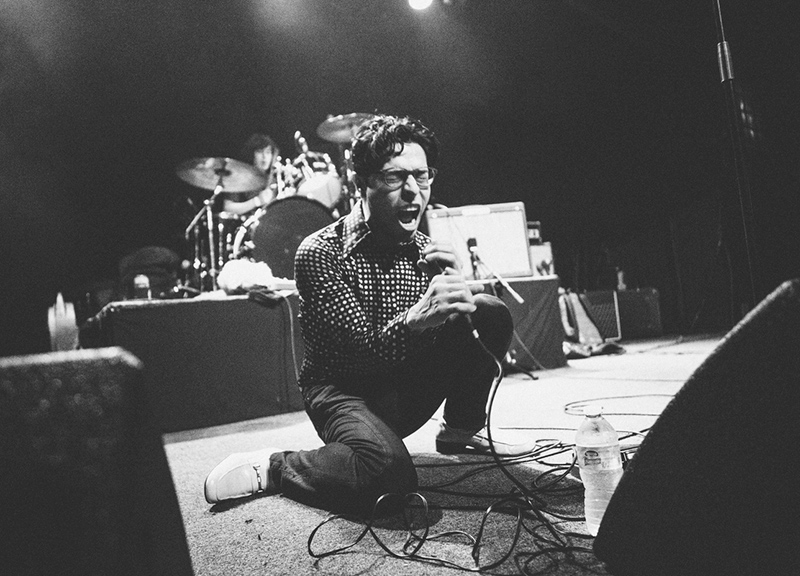 All The Tasty Local Jams That Are Fit To Print.

Ronnie Heart — “Smoovie.”
RIYL: Hearing about how Prince-like he is all the time.
What else you should know: Four years ago, we were teased with the prospects of a new solo EP from ex-Neon Indian guitarist Ronnie Heart. The first single, “Tasty Destination,” was, for lack of a better word, tasty as hell. But that was the only taste we got for years — other than what we've seen at Heart's high-energy live displays. Now, we get a second helping via Spin, which debuted a new single, the Michael Jackson-esque “Smoovie.” Even better, the rest of the album is 100 percent really coming out now, on April 1.

Cozy Hawks — “Sweet Talk.”
RIYL: Fun things that are fun.
What else you should know: Speaking of Ronnie Heart, his old Gazelles bandmate Adam Bertholdi has a new LP in the works as well with his Cozy Hawks project. So far, every Cozy Hawks album to date has featured at least one perfectly sugary, undeniably infectiously power pop single. It appears the band's upcoming third LP will be no different.

Pageantry — “Teenage Crime Wave.”
RIYL: Anything and everything the great Roy Robertson touches.
What else you should know: Between performing an official SXSW showcase next weekend at TenOak and playing Homegrown Fest in May, Denton dream pop band Pageantry will release a new nine-track LP called Influence, Influence, on April 1. Mostly recorded with Matt Pence at The Echo Lab, this second single showcases a bit of a fuller sound than the band's Friends of the Year project, which you can hear for yourself above.

Chris the Artist — “Dandelion” (feat. Tim and Oscar DeLaughter).
RIYL: Reaching for the sun.
What else you should know: Christian Gordon, aka Chris the Artist, is a 16-year-old poet and artist that's put together his first hip-hop EP. It's pretty inspired stuff, touching on slavery, mysogny and higher planes of understanding, all the while questioning what art even is. This cut also stands out because it features Polyphonic Spree leader Tim DeLaughter and his son Oscar, as well as poet Damon Jamil.

Hot Coffins — “Healing Hands.”
RIYL: Rocking me, Amadeus.
What else you should know: As we said last year, Hot Coffins set in the J&J's basement was our favorite thing we saw at last year's 35 Denton festival. Appropriate then, that as the fest gets going again tonight, the band debuts a new track. And, yes, they're playing the fest again this year. You can catch them 9 p.m. on Sunday night at Lone Star Taps and Caps.

Little Image — “Dear Orphan.”
RIYL: Jesus.
What else you should know: After meeting each other on social media, Little Image developed enough chemistry to release a debut EP in the fall of 2014. “We found that our strong love for people and Jesus is what brought us together,” the band writes on its website. “People are a huge part of who we are. We believe that we weren't put on this earth to judge- but to love. To bring a little glimmer of hope to the hopeless, and be a light in their darkness. We strive to make it known that we love people in any and all ways possible – no matter who they are, what they stand for, or what they're going through.” They've since raised a bunch of cash via crowd-funding to record a proper full-length, which they say will be out this winter. In the meantime, check out the forthcoming LP's first single, “Dear Orphan,” which fills the feely, vaguely religious holes in our heart Seryn left behind — only without all the folky excess. We think it's a sound that can be appreciated regardeless of one's beliefs.

Street Arabs — Ill Form.
RIYL: Punk rock with sprinkles.
What else you should know: Dallas' favorite ice cream punks released this little gem of a seven-inch last year, although up until now it's only been available on vinyl. For those of us that haven't managed to snag a physical copy of this one yet, it is now streaming online. So convenient! In the time since that one's been released, the band's done some minor lineup shuffling — bassist Chris Mancini moved over to drums, and Aquaholics bassist Josh White joined the fray — and recorded a new full-length with OBN IIIs mastermind Orville Neeley producing. Look for that one a little farther down the road.

Bare Mountain — Fruits Arranged in a Vaguely Phallic Tableau.
RIYL: Getting darted with animal tranquilizers.
What else you should know: Bare Mountain's fourth release in the last nine months sure is a trippy one, as it's comprised of a bunch of field recordings and instrumental takes captured at Dallas DIY venue The cOoompound. From there, Chance Cook of the band Linear Downfall mastered the haunting cacophony.

Atop — A Trip to Tormance.
RIYL:
What else you should know: Atop is the ambient project of Cody McPhail, the same guy behind those recurring Dallas Ambient Music Nights. He was also a member of Eyes, Wings and Many Other Things, so this kind of thing really is his bag. Oh yeah, and this collection of abstract sounds is said to be inspired by the David Lindsay novel A Voyage to Arcturus.