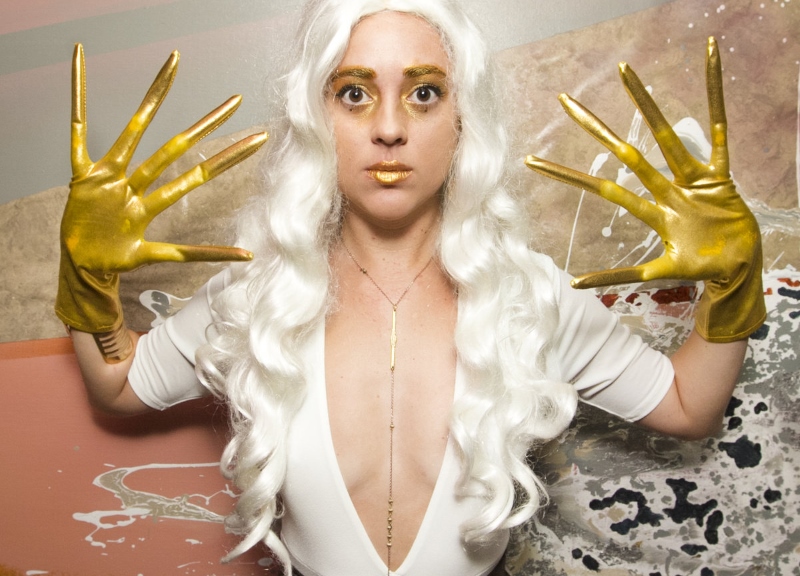 Pearl Earl — “Cosmic Queen.”
RIYL: Going places.
What else you should know: We're always stoked to find out that our favorite young Denton band has released another new single. A couple days ago, and coinciding with the band's departure on a 30-day West Coast tour, Pearl Earl dropped yet another tasty little psych-pop treat. The band's currently on tour with ABACABA, which just released a pretty great little prog-lite record of its own, and shares a couple members with its that other band too. Pearl Earl also recently told The Dentonite that they'll be recording a full-length when they come back from the road, which is good news, because we're always stoked when our favorite young Denton band releases new material.

The Misteries — “Love Drugs.”
RIYL: Soft drugs.
What else you should know: To coincide with its current tour — a short run with We Are Scientists — the gentlemanly, '60s-indebted psych band The Misteries released its first official single this week. Like our favorite local song of 2014, this one's a real solid, extremely well-produced tune that references drugs. It's just more official now, I guess.

Quaker City Night Hawks — El Astronauta.
RIYL: Blasting off.
What else you should know: Like that Misteries single above, Quaker City's third full-length was recorded with local studio ace Beau Bedford at the helm, meaning this one, too, is exquisitely produced. Noisey previously described the opening cut as sounding like it was recorded by “a gang of sci-fi-obsessed ZZ Top superfans who've gone rogue,” which is really just a clever way of saying they've found a way to make dirty ol' run-of-the-mill blues rock sound strange and interesting again. And is it! It's out today via Lightning Rod, so expect lots of national touring in these fellas near future.

Tony Ferraro — “You Are All That I Want.”
RIYL: B-sides that should be A-sides.
What else you should know: A bit more sparse than Ferraro's recent — and quite solid, I might add — A Parrot Buys a Hotel full-length, this non-album single largely foregoes the bulk of Ferraro's usual cast of backing musicians in favor of some simple piano from the inimitable Scott Danbom, and the subtlest of percussive noises from Justin Collins (the release notes suggest he's predominantly playing sandpaper blocks). Other than that, it's more greatness from the always reliable Ferarro.

Robert Glasper — “Maiysha” (feat. Erykah Badu).
RIYL: Tooting your own horn.
What else you should know: After penning some songs for Don Cheadle's recent Miles Davis biopic, jazz pianist Robert Glasper's been working on a new album that reworks snippets of Miles Davis' studio recordings to create new songs. The first single features Erykah Badu contributing vocals to a bossa nova revamping of 1974's “Maiysha.” Check it. Because nobody's cooler than Miles Davis.

Jayson Lyric — Lyric Show.
RIYL: Playing checkers better than playing chess.
What else you should know: A lot of local rappers' favorite pastimes is bitching on social media about not getting the respect they think they deserve, or how, despite the number of write-ups they're getting, that the media is completely ignoring them. With his latest full-length, Lyric takes the opposite approach, keeping his head down, grinding and remaining ever-optimistic that his material is quality enough to speak for itself/propel him to the next level. We'll give him that; it's p good.

Bruce Parker — “Blindside.”
RIYL: The five best rappers of all time.
What else you should know: Have you seen that new video going around that deconstructs the intricate rhyme schemes of some of the best rappers of all time? It's pretty fascinating. And with his original flow and complex, ever-changing rhyme schemes, we'd say Parker leans closer to the Eminem end of the spectrum than the Kurtis Blow end. Talent meets fire here.

Paul Slavens — “I Got So Much Love.”
RIYL: Being utterly overwhelmed.
What else you should know: Though we've just posted one track here, it actually comes from a batch of 10 albums Slavens released today via his Bandcamp page. There's a wide range of material there — synthesizer fugues, jazz, experimental, pop, ambient and various combinations thereof. Seriously, there's just so much there, you're just going to have to dive in and start sorting through it yourself. For a little more background on the project, the Observer's got you covered.

Pale Dian — “Evan Evan.”
RIYL: Breakups.
What else you should know: The band FKA Blackstone Rangers moved to Austin last summer, and is finally set to release its long-awaited debut LP, Narrow Birth via Manifesto Records on June 3. This second single, which singer Ruth Ellen Smith has described as being about the end of a burnt-out relationship, premiered via The Fader this week.

They Say the Wind Made Them Crazy — “Obsidian in Aorta.”
RIYL: Songs of the humpback whale.
What else you should know: They Say the Wind Made Them Crazy is Cerulean Giallo's Sarah Ruth Alexander and Unconscious Collective's Gregg Prickett, who both contributed to last year's stellar Litany from Dead To A Dying World. Under this similarly long-winded name, they once again offer up hammer dulcimer, harmonium, recorder, bells, guitar, upright bass, cedar flute and a few other odds and ends. This is an immensely talented duo, to say the very least, and Prickett is one of the most perennially interesting guitarists in town. As true with some of their previous projects, the band's new Far From the Silvery Light LP sounds like it's going to take more than a cursory listen or two to really dive into. Hell, first single “Obsidian in Aorta,” is challenging even in its overwhelming simplicity. We'd expect the rest of the tracks to fall in line. Anyway, the album officially earns its release as part of a July 9 release show at Ochre House.