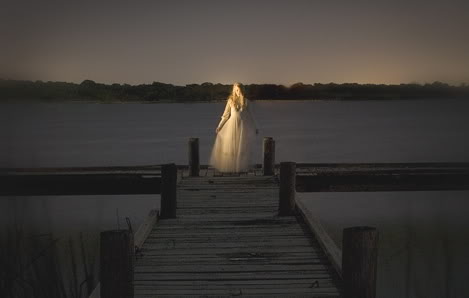 There are a ton of songs about or inspired by Dallas, and they say a lot about who we are. So each week in this space, we’ll take a closer week at one of these songs — and we’ll try to determine what, exactly, they say about this great city of ours. Check out this feature’s archives here.

It’s a story as old as time.

In horror literature, it’s referred to as the “vanishing hitchhiker” tale. In short, it goes like this: A man or a couple picks up a hitchhiker — usually a young girl — and, when they get to the destination she directed them toward, not only has the passenger disappeared, but it turns out that a girl matching her description has already died, often on that exact date, several years prior. Sometimes a scarf or other item that once belonged to the girl is found in the car.

Modern versions of the story date back as far as Washington Irving’s 1824 tale The Lady With the Velvet Collar, but older versions of the story date back for centuries, especially in Europe, where horses were substituted for cars. Some have even made the case that the biblical story found in Acts — where an Ethiopian chariot driver picks up the Apostle Paul, who baptizes him and then disappears — is one of the first incarnations of the theme.

With literally thousands of extremely similar incarnations of the vanishing hitchhiker story set in nearly every part of the world, The Country Gentlemen’s 1966 song “Bringing Mary Home” could have been about any of them, really. But, no, it has been widely accepted that mandolin player and co-founding member John Duffey was inspired to write the tune after hearing the legend of The Lady of White Rock Lake.

The earliest published version of the Dallas-based vanishing hitchhiker tale is attributed to writer Anne Clark’s “The Ghost of White Rock,” which was included in the Texas Folklore Society’s 1943 publication Backwoods to Border.

In that version, a young couple parked on the shores of White Rock Lake all of a sudden encountered a dripping-wet girl in a white sheer dress, who claimed she had just fallen out of a boat and urgently needed a ride home. When the couple arrived at the girl’s Oak Cliff home, though, they discovered only a puddle left in the seat she was previously sitting in. A man at the address that the girl had given the couple then informs them that his daughter drowned in the lake three weeks prior. What’s more, they were the third couple to have driven her ghost home.

Another popular originator of the legend is believed to be Guy Malloy, who worked as a window dresser at Neiman Marcus in the ’50s.

Though he may or may not have been telling the tale as early as the ’30s, his account wasn’t published until it appeared in Frank X. Tolbert’s 1953 book Neiman-Marcus, Texas: The Story of the Proud Dallas Store. Key ways in which Malloy’s tale differed from Clark’s: In his version, the girl asked to be taken to an address on Gaston Avenue in Lakewood; the father said his daughter had died two years before when she fell off a pier; and, at several points in the story, Malloy’s wife points out that the girl was wearing a “very fine dress” that she just knew had to have come from Neiman’s.

In the dozens of other variations we’ve read, the Lady of the Lake asks to be taken to various addresses all over town. But Oak Cliff is definitely the most common.

There are also at least four distinct ways she died, depending on who is telling the story: Sometimes, she’s crashed her car into the lake; other times, she’s fallen off a boat; in yet other versions, she’s slipped off a pier; or, in perhaps the most tragic renditions, she’s thrown herself into the lake on purpose in a fit of anguish. Almost nobody agrees on how long ago she supposedly died, or how many other couples had previously attempted to bring her home.

But if the story is so consistently inconsistent, then the big question is how it’s persisted for so long. Could all these people possibly be seeing the same apparition? Could there be any factual basis for the legend?

We know that, in both 1935 and 1942, young women did commit suicide by throwing themselves into White Rock Lake. But, in the case of the latter, 35-year-old Rose Stone of Mansfield was wearing a sweater and a skirt at the time of her death, and not the flowing white gown that appears in nearly every version of the tale.

Could it be instead that the lady ghost is one of the early Dallas settlers buried in the Rock Creek cemetery? That cemetery, which is now located near the lake’s west shore, was founded in 1848 — only seven years after the first pioneers settled in Dallas proper. But White Rock Lake itself didn’t come along until 1910 when it was built as reservoir during a horrible drought. Is it possible, then, that the Lady of the Lake is one of Dallas’ early pioneers, upset that her final resting place was disturbed? It stands to reason that, when George Kessler helped make the land around the lake public — in turn drawing thousands of fishing, swimming and boating Dallasites to the area daily — it could have further peeved the spirits nearby.

Regardless, the prospect of encountering ghosts certainly hasn’t kept visitors away from White Rock Lake — that much we know given the lake’s still-huge popularity as a cycling, running and walking hub.

And the prevalence of the tale certainly hasn’t hurt The Country Gentlemen too bad, either. In the years since they first released “Bringing Mary Home” as the title track of their ’66 LP, it has been covered so many times, it’s now considered a bluegrass standard.