Slaves To The Game. 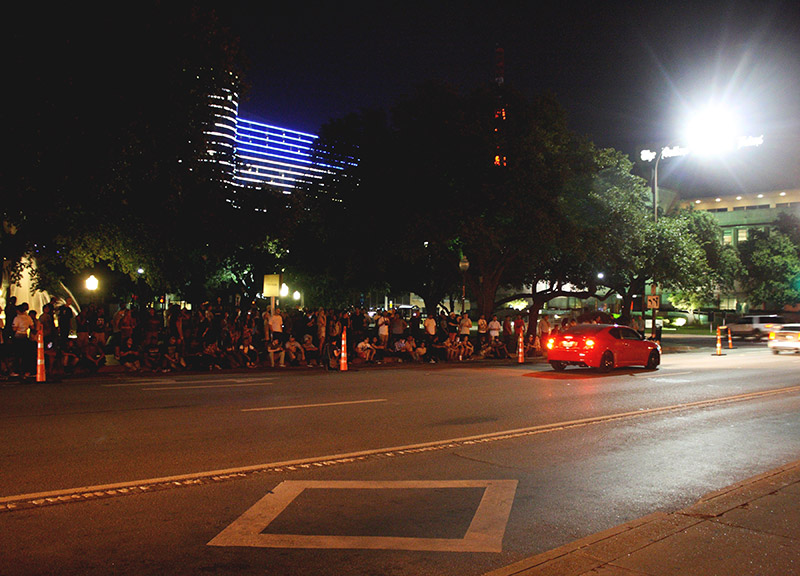 By most accounts, last night's series of screenings around town that were meant to promote the upcoming, if already leaked, Kanye West album, Yeezus, started out well. By 9:30 p.m., some 300 of West's fans had gathered at Union Station, the Downtown Dallas transportation hub, to take in the first of five scheduled screenings of the very same “New Slaves” video that West's people have been projecting onto buildings across the country for the past month or so.

This first one went off without a hitch. And the crowds arrived, mostly, for the spectacle of the whole deal — which is, of course, appropriate. With Mr. West, we learned this week, audacity is very much the name of the game.

But there was a decidedly different pop culture factor at play this time around. By the time Friday night's screenings started, Yeezus had long leaked — by Internet standards, at least. Early into Friday afternoon, most every major music publication across the country was all but begging audiences to search for a free, downloadable link of all ten of the album's new tracks.

So crowds, perhaps, were expecting something more. And maybe not unjustly so: If Dallas was to only learn about these screenings happening in town on the very same day in which the album was finally leaked, then — surely — there was something else going on here. I mean… right? That was obviously why Dallas had been passed over last month, when Houston, San Antonio and Austin — among other cities nationwide — got their taste.

Alas? Nope. Dallas received much of exactly what fans in Houston and San Antonio, specifically, received back in May: Screenings would be canceled, locations would be moved, and crowds would show up in droves, if scratching their heads by the time they left.

As foreshadowed earlier when the Dallas Police Department showed up to pass by the Union Station screening, the 10:30 p.m. Majestic Theater screening of the not-even-five-minutes-long clip was shut down outright as police arrived in force, a paddy wagon en tow, to warn the two men behind the traveling van that hosted the projection equipment to get out of Downtown, lest they wanted a write-up.

Then it was off to the Double Wide, the east-end-of-Deep Ellum institution, and the lone actual in-operation business in which it was announced that a screening would take place. Credit Double Wide owner Kim Finch and her can-do spirit for this screening happening at all; miffed earlier in the day, but perhaps anticipating a larger crowd on Friday night given all the hype, Finch had fenced off her bar's front parking lot to handle an excessive crowd, and it would prove a prescient move. When West's projection team arrived on site, still seemingly unaware of where in the area, exactly, they would project their film, Finch offered them a respite from Johnny Law: She directed the van toward the southern end of the venue's main parking lot and instructed West's people to project the film onto her venue's permanent, out-front Airstream trailer and the walls beyond. Then, in a heartwarming show of compassion, crowds at the privately-hosted screening parted like the Red Sea to ensure that all in attendance — around 300 or so once more, the 21-and-up-set largely on the “in” side of the fence and the younger and passersby sets over on the “out” side — could get a glance of what would end up being an 11:45 p.m. screening.

It was a nice, if brief moment.

The screening team then headed to the old abandoned Union Bankers building for their next showcase, which would never actually take place. Then it was off for the final showing of the night, originally scheduled to go down along Fair Park's esplanade. But that too would get shut down.

Eventually, this final screening would be made up over on the nearby Exposition Park intersection of First Avenue and Ash Street. By then, though, the crowds had largely fizzled. And the chatter had arisen: Were these showings, uh, cool?

At face value, they were what they were — five-minute clips featuring a song to an album that every die-hard in town already possessed on their desktops. In grander “scene theory,” though, the showings were validations that Dallas had, in fact, deserved these showings' presence — major city that it is, and all. And yet, the Devil's Advocate argument to that same pitch argued that the at-times impressive turnouts on this night showed off a city all too desperate for validation from an artist who wouldn't dare accompany his guerilla “films” in person.

In the end, well, it was just a marketing ploy. And, hey, it worked. Because Kanye is Kanye, and he's a goddamn genius for that.

But, really, that's it. Fun and perhaps excitedly hectic at times, that's all it was, really.

And we ate it up. 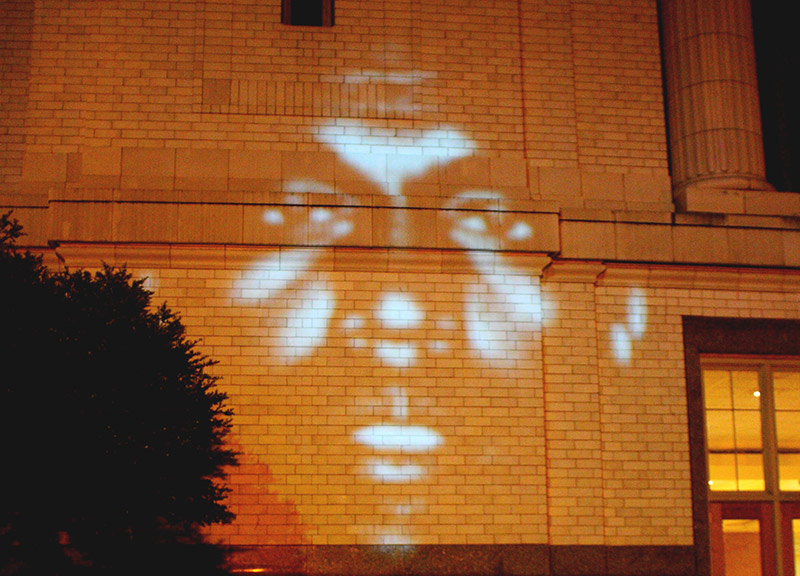 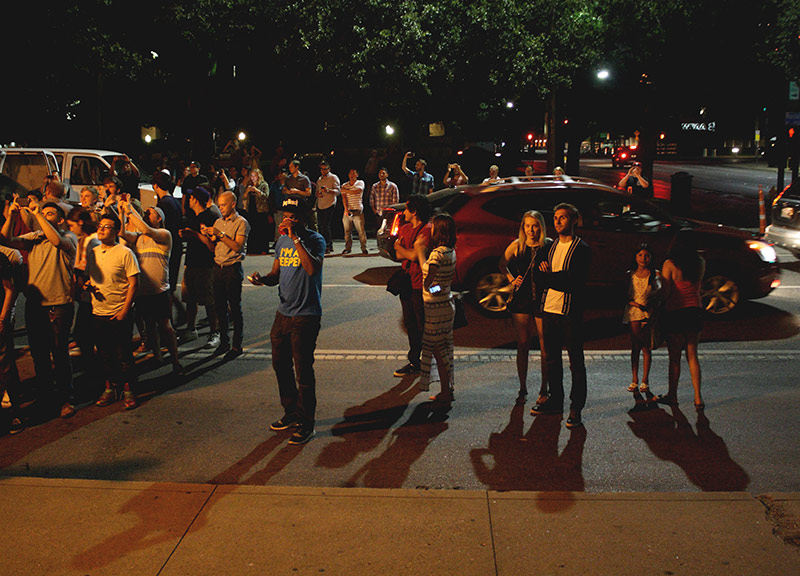 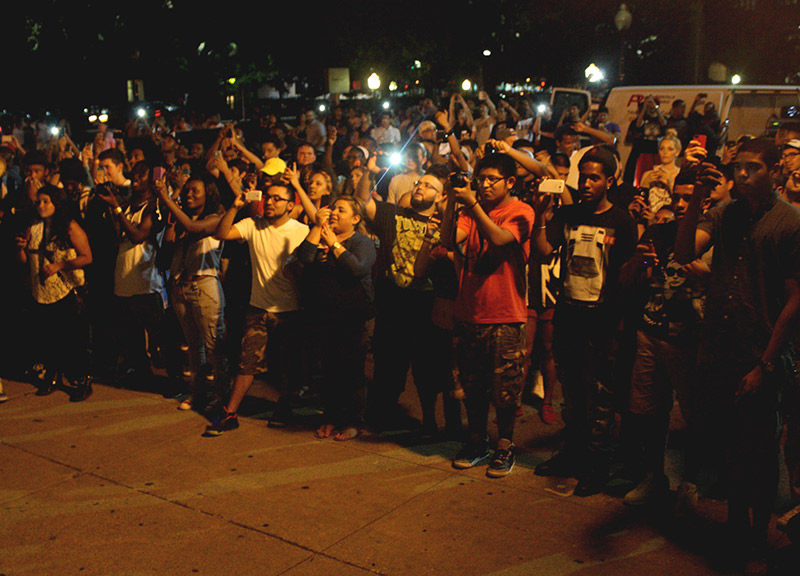 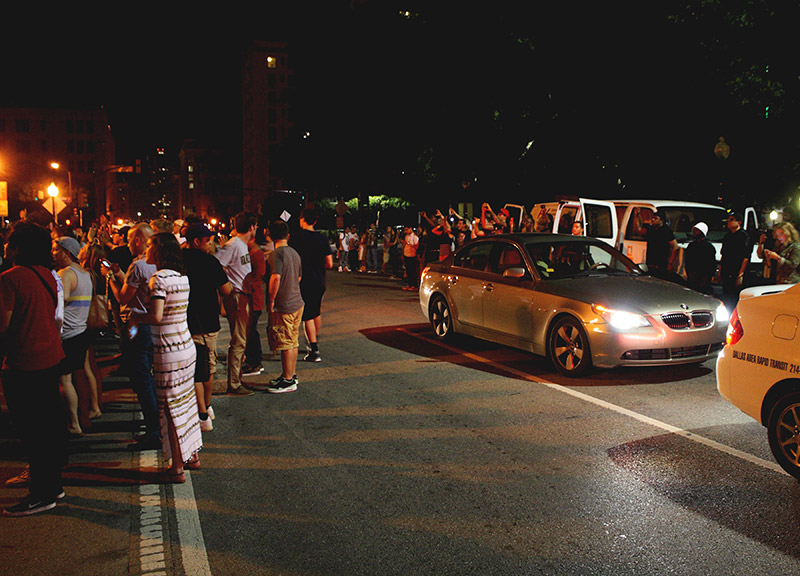 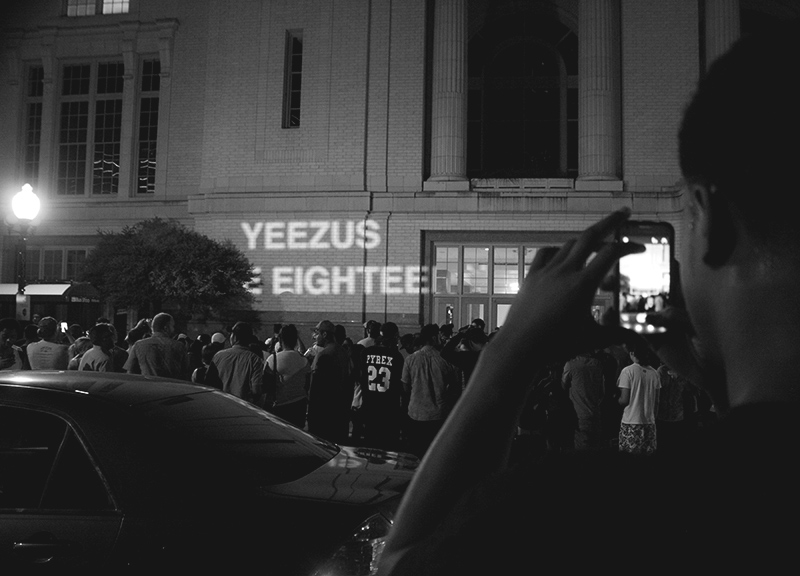 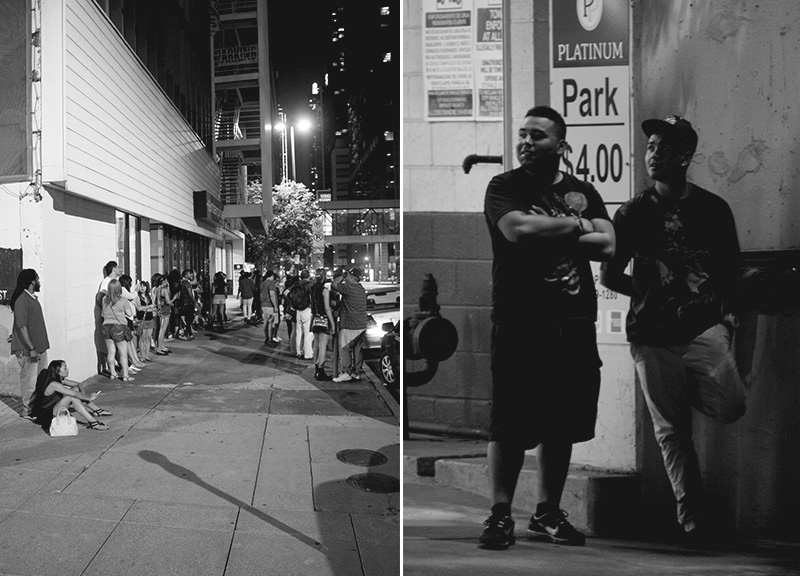 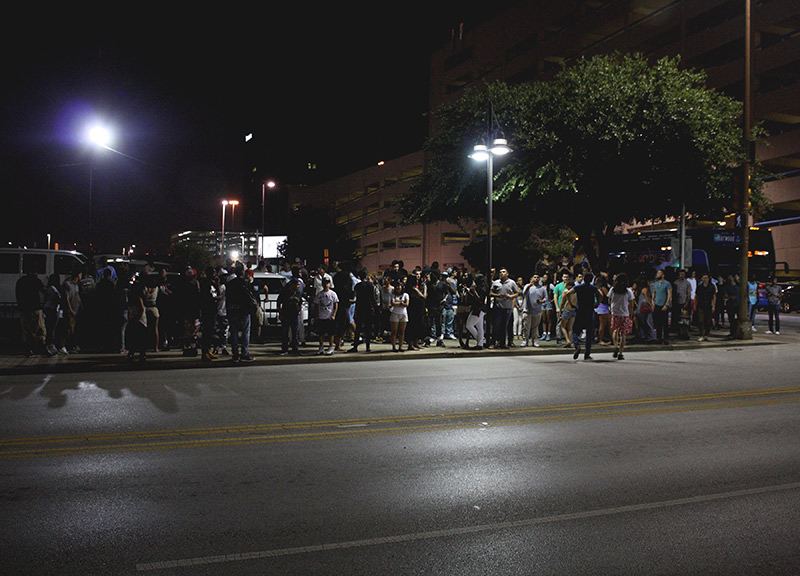 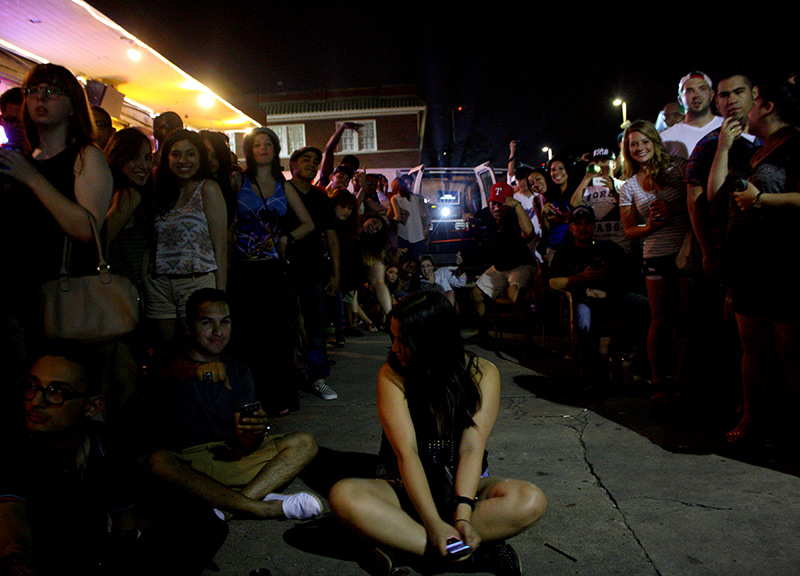 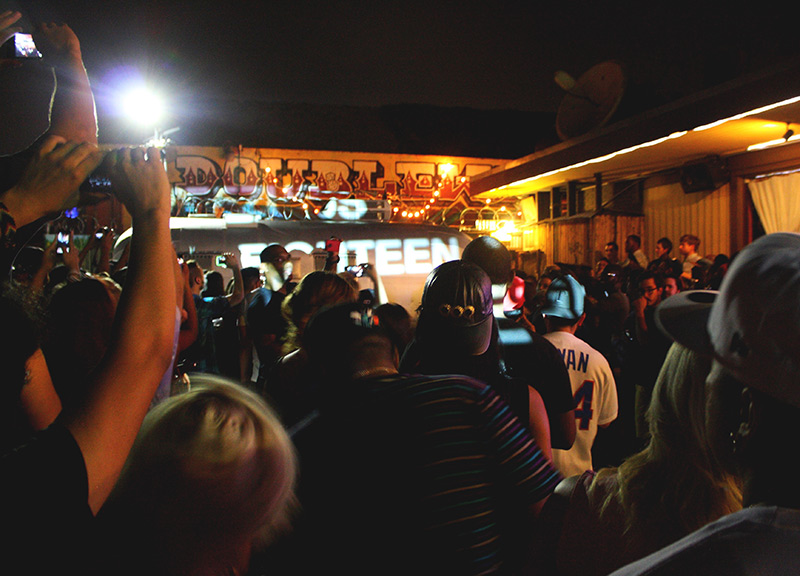 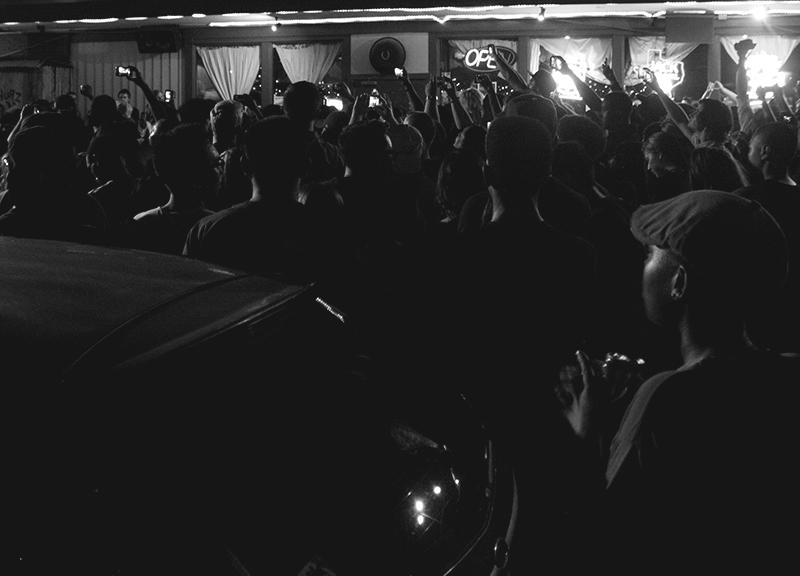 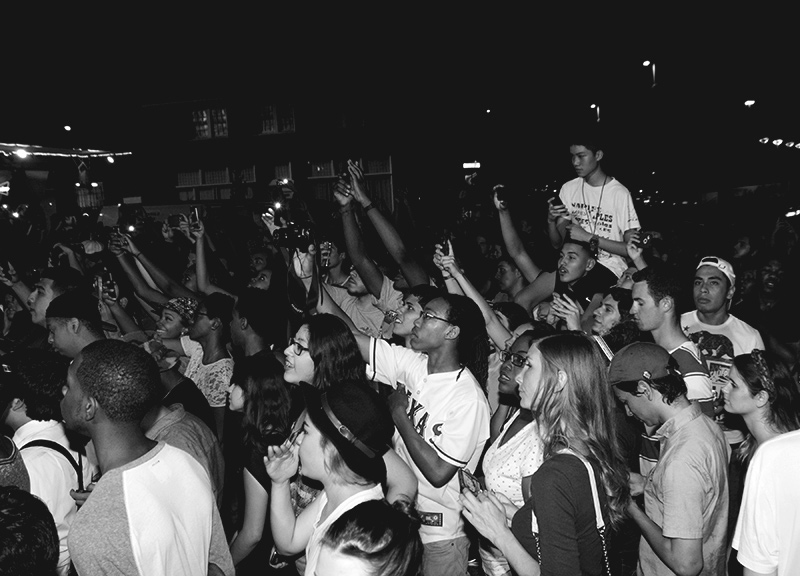