Shots In The Dark. 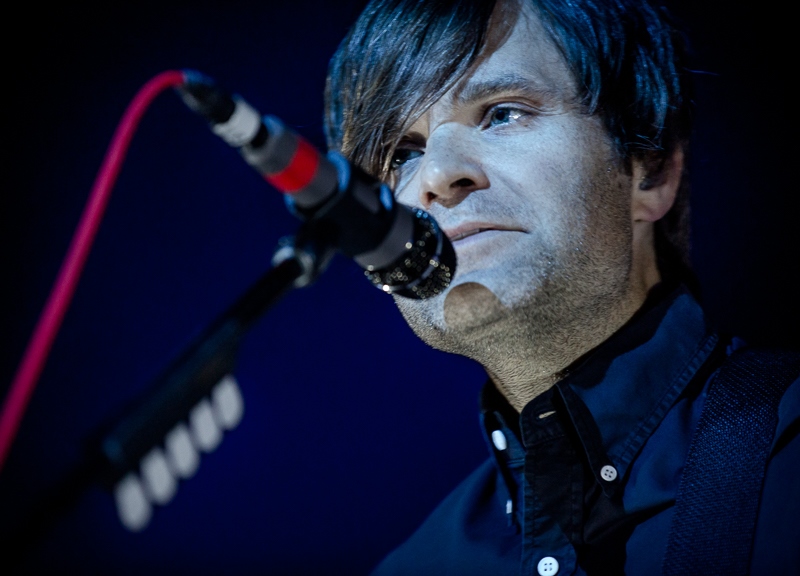 I was thinking about a lot of disparate things as I lurked around the fringes of The Bomb Factory while Death Cab for Cutie was playing last night — mostly about when, where and why Ben Gibbard’s voice, and DCFC’s music touches me in my special music place. And maybe also why, when I’m sitting in my space listening to Death Cab’s music, I often feel like crying. But it turns out that when I’m at a show full of people singing along to almost every song — at least the downstairs people were, not so much the upstairs people — I keep finding myself smiling.

I’m a late-comer to the Death Cabs, or the Cuties, or whatever it is that fans call them. Although they’ve been doing their thing since the late ’90s — well before my own taste-freeze started to set in — I’d failed to permit them into my consciousness beyond their memorable (and arguably dumb) name. I don’t think my resistance had anything to with their commercial successes — hell, I didn’t even know they’d had much commercial success until I grazed through their Wikipedia entry yesterday as last-minute prep for covering the gig. As it turns out, they’ve had some actual mainstream chart-toppers, and plenty of placement in movies and TV shows that I actually like(d) and watch(ed)!

I must’ve heard them without realizing it was them , but I just hadn’t started actively listening to Death Cab for Cutie until around 2010. At that point, I’d just recorded my own weird little album of songs, and I was digging into music listening and discovery/recommendation services like Pandora and Jango in order to try to figure out what the hell my own music sounded like. The algorithms companies like — ones used to recommend music — were in their relative infancy then, but one of the names that kept coming in the “If you like [X}, you might like [Y]” spots and automated playlists for me was Death Cab For Cutie. So I purchased — yup, I’m one of those people! — 2006’s Crooked Teeth EP, which I liked. And shortly thereafter, I bought 2009’s full-length Narrow Stairs, which I loved.

I learned a long time ago that the music we love is as much if not more about the stories and emotions we bring to the music, and far less than what the musicians put into the music. At it’s best, it feels like the musicians are speaking directly to us, finding common ground among our experiences and somehow lifting it into a more transcendent, universal experience via song.

Well, OK, that probably does happen to greater and lesser degrees. But the truth is the emotional impact is almost all in what we bring to the music, the first time we heard it and all the other rotations the music makes through our lives and hearts. It’s context. It’s emotional. And it’s social.

My context for Death Cab is, of course, interwoven with my own search for my musical identity — it cuts that deep. I’ll assert that the fundamental narcissism of that isn’t so different from anyone else’s, and take solace that at least I have some fleeting degree of self-awareness. Or maybe it’s just because “I Will Possess Your Heart,” the song that epitomizes Death Cab for me, somehow sounds like a musical grandchild of Jane’s Addiction’s “Mountain Song,” which carries plenty of overly angsty emotional context from my college years.

By the way crowd went wild for “I Will Possess Your Heart” — which clocked in at about 7-and-a-half minutes last night, a little shorter than the “album version” — I’m willing to bet it’s for as many different reasons and as many different contexts as there were people in the room — including the people on stage. After all, touring guitarists/keyboardists Dave Depper and Zac Rae came to that song (and all the others) as listeners to the music, not as the creators like remaining original DCFC members Gibbard, bassist Nick Harmer, and arguably drummer Jason McGerr.

At last night’s show, Gibbard’s voice was in perfect form — meaning, love it or hate it, he sounded exactly like himself. Like I said, it made me smile.

To begin the evening, there was something familiar — in that way that reaches back and touches something deep — about Alicia Bognanno’s voice as she made her way through Bully’s opening set. This Nashville combo worked within the technical constraints that most support acts do these days — virtually no light, and a lid on overall volume (or at least loudness) that can sacrifice intelligibility to the ambiance of a big room like the Bomb Factory. Between those constraints, the unfamiliarity of the audience with their material, and what seemed like some time Bully needed to warm and loosen up, there was a real risk of the set being ignore-able. But there’s something about Bognanno’s voice — and I mean this as a compliment — that transforms seamlessly from something sweet into something very salty. Honestly, I could barely understand a word she was singing, but there was something about the way she wailed that demanded my attention. And I heard more than one person, particularly those nearer to the better listening positions in the room, opine that they actually liked Bully better than Death Cab.

Meanwhile, down in the cheap seats, standing on the floor, the entire room sang along with Gibbard’s solo acoustic version of “I Will Follow You Into The Dark” and you knew that those people, coming from whatever respective contacts they brought to the room, probably would follow Gibbard into whatever their version of the dark would be. 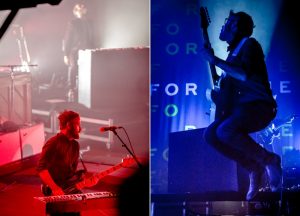 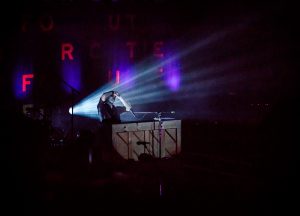 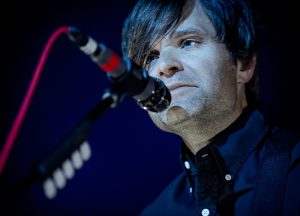 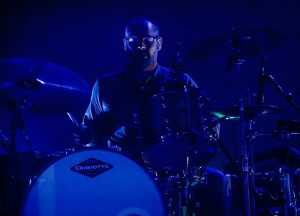 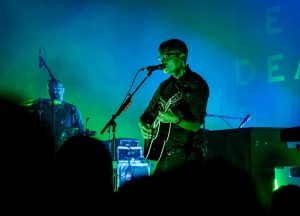 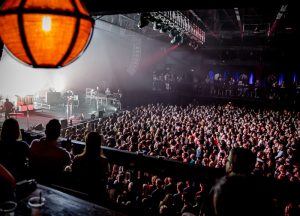 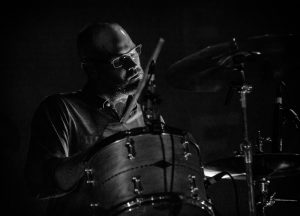 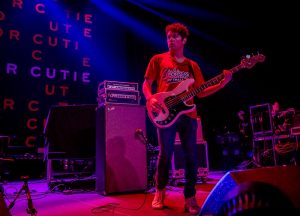 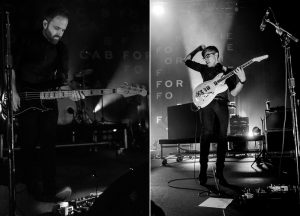 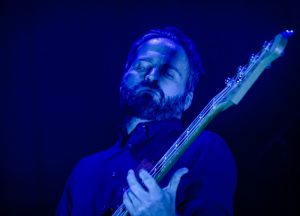 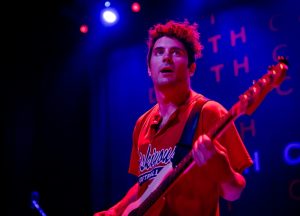 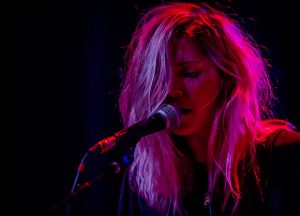 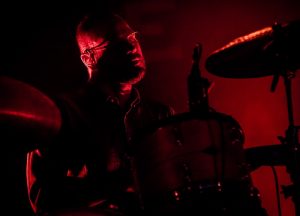 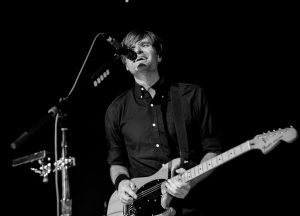 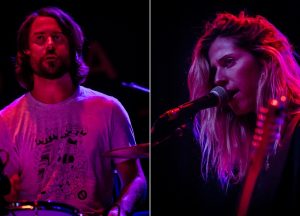 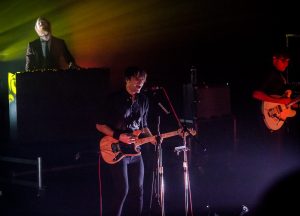 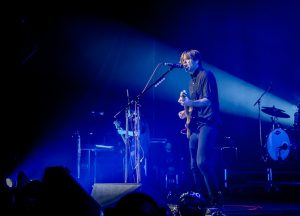 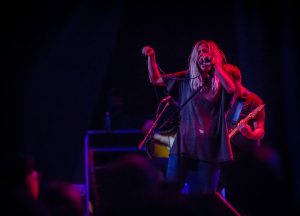 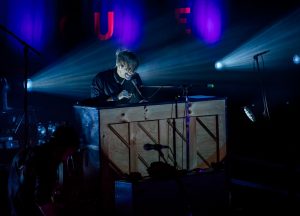 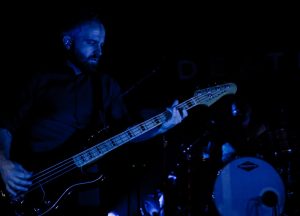 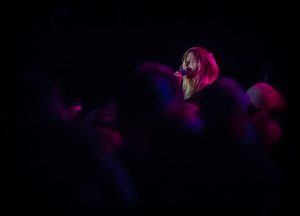