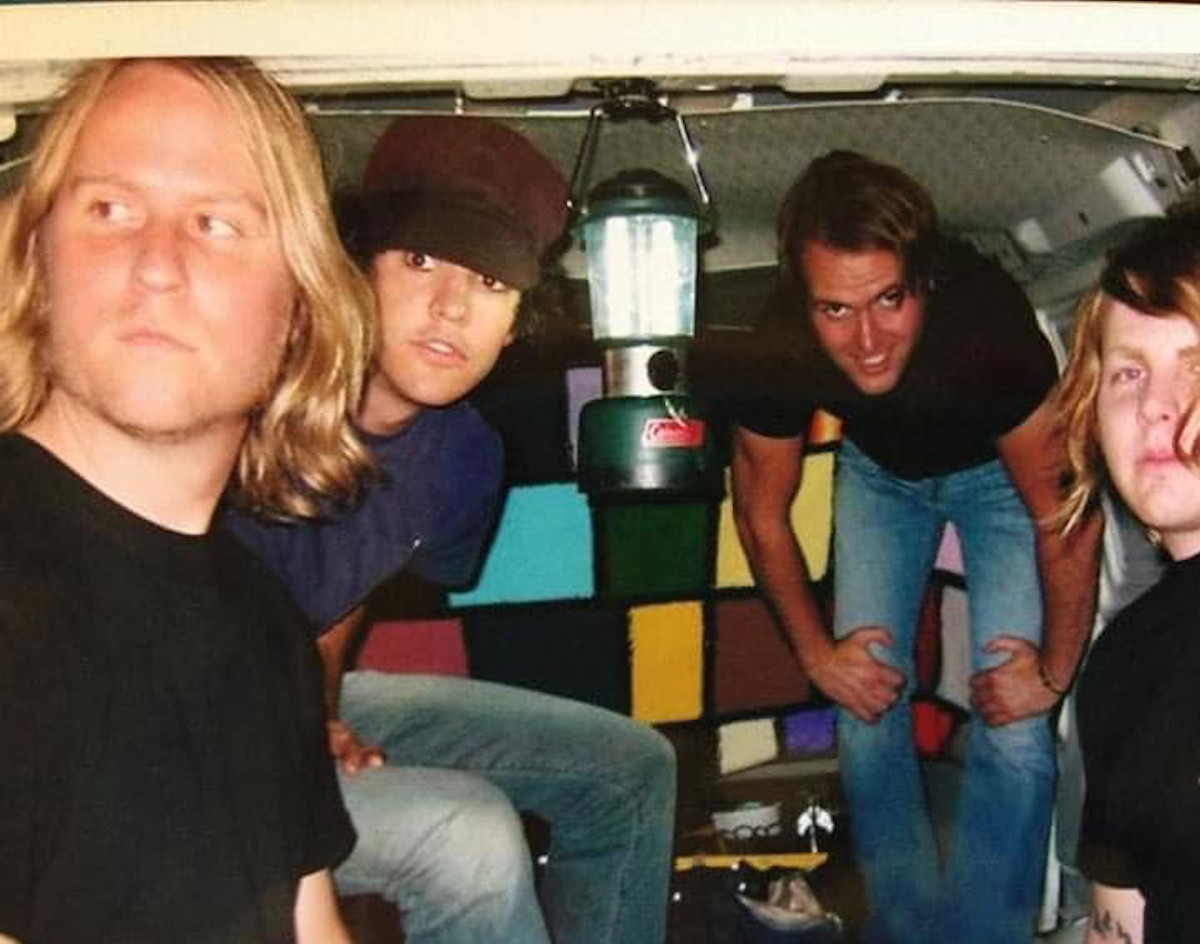 The Eddie Thomas Tribute Show Is Finally Happening After The Drummer’s Death In 2020. Speaking To His Loved Ones, We Honor His Work And Memory.

Eddie Thomas passed away on Christmas Day, 2020. Now in 2022, a tribute show devoted to his memory can finally happen — and it’s happening this Saturday afternoon, February 19 at the Double Wide. Billed as the Eddie Thomas Memorial Celebration, it’s a delayed, but necessary, event for friends, family and fans.

All three main bands Eddie played in – Black Tie Dynasty, The Crash That Took Me and Go Imperial – are scheduled to play with fill-in percussionists and drummers, along with [DARYL].

While there were tributes immediately following his passing (including here on Central Track), this show serves as a reminder of how much of an important person he was in the community. So, we reached out to some of the people that knew him very well to discuss his life and his lasting impact ahead of this special show.

Edward Roland Thomas was born in San Antonio on the second day of December in 1971. Like a lot of aspiring drummers, he banged on pots and pans before his mother bought him a drum set. He would play in bands for years and became a father in 1990 to a daughter named Randi.

Around the North Texas music scene, he caught many people’s attention with his drumming in the new wave/post-punk inspired Black Tie Dynasty. His busy, but tasteful snare rolls, cymbal hits and tom-tom fills helped make the quartet a unique and exciting band. Off the heels of a well-received debut EP in 2005 called This Stays Between Us and followed by the Movements LP in 2006, the band was loved by the local press, got great radio play and played many shows. After their 2008 LP, Down Like Anyone, the band went on hiatus.

“It’s difficult to sum up what Eddie meant to the group,” says Black Tie Dynasty vocalist/guitarist Cory Watson. “I think, like any great drummer, he knew what was needed in any situation and provided that. It could be related to music or otherwise. If you needed someone to listen, lighten the mood, just drive all through the night on tour, etc, he was there heeding the call. I’ve never met a more loyal and selfless person and one that gave so much to others while asking so little in return. As a drummer, I feel that he legitimized us in the early days especially and his skill and ability led us to push ourselves creatively and to pursue greatness. He kept that drive going.”

Thomas’s next project was a supergroup of sorts led by Dylan Silvers of [DARYL] called The Crash That Took Me. Inspired by shoegaze acts like My Bloody Valentine and other early 1990s contemporaries, Crash was a stacked sound of guitars, keyboards, strings and drums. Once again, Thomas’s penchant for keeping things bouncy and pulsing forward gave the band a great kick.

Meeting through a mutual friend in 2001 and marrying in 2002, Eddie and Fatima were together until his death after he fought the good fight against Glioblastoma in his final years. COVID-19 claimed his life not long after he tested positive.

Thomas’s last band was Go Imperial, a space rock act with a punk charge. An EP’s worth of songs were recorded before Eddie passed, but have yet to be released. Until now.

While the full Go Imperial EP will be on Bandcamp on Saturday, they were generous to share with us an exclusive premiere of a song written from Eddie’s perspective of on the struggles he faced called “Gal Gadon’t.”

Faster Than the Light

With the time between his passing and this memorial show, there is plenty of love, memories and joy shared. Despite undergoing surgeries and treatments for his brain cancer, he wanted to keep playing. If his bands were scheduled to play, he prepped and didn’t complain.

“Throughout our time together, Eddie’s indomitable spirit became the heartbeat of everyone around him, be it playing music with me in Crash or Go Imperial and certainly Black Tie Dynasty, but also in his non-musical, outside world,” says Beau Wagener, who played in The Crash That Took Me and Go Imperial. “There really aren’t enough words I could say about his dedication to his friends and family, much less about his humility regarding his talent, or his loyal friendship or his ability to be a kind and decent human.”

Back in May of 2019, he was focused and well enough to play a show with Go Imperial only a few weeks after surgery. A large scar on the left side of his head was easy to spot, but his generosity with those he came across made an even bigger impact.

“This is a good example of Eddie’s overall way of dealing with life: never complained about anything and just took care of business, period, regardless of difficult circumstances,” says Fatima Thomas. “So yes it was his love of music, but it was also just the way he went through life. Even after being diagnosed with Glioblastoma – meaning terminal brain cancer because there is no cure – he didn’t complain. He just did what he had to do to get through treatment the best he could to try to win the fight. He was fierce and brave unlike anything I’ve ever seen in anyone else.”

For Dylan Silvers, he remembers the last show Eddie played in December of 2019 at the Double Wide. Playing with two bands that night, Eddie was on point, per usual.

“He was amazing, truly incredible,” Silvers says. “That was the last time I saw him because COVID was right around the corner. I feel damn lucky to have shared the stage with him one last time, and thankful that Beau made it all happen. February 19 is gonna be very hard to be there and play music without him.”

For Fatima, she’s thankful for the records she made with Eddie in The Crash That Took Me.

“Having those recordings means everything to me because it was the one creative endeavor he and I did together and there are a lot of great memories of the times we had together in that band,” she says. “His drumming is so distinctive and so strong, I remember at band practice when he came up with the beginnings of the drum parts to “Chlorine Colored Eyes.” The whole band just kind of stared in awe not believing what we were hearing because it was so amazing. And yeah he was solid as a rock and he definitely helped me become a better player because of that.”

Reconnect It With a Curve

Eddie was the quintessential husband, father and grandfather, balancing music, work and his time in Texas State Guard — as well as his love for the Dallas Stars.

“One of the things I love him for the most is the fact that he always supported me and always believed in me, no matter what,” Fatima says. “He encouraged me to be better and helped me learn how to believe in myself in a way I never had before I met him. And he did that for others too, he was truly the most generous person I have ever known.

“When he knew he was going to die he would tell me so many times that I was going to live for a very long time after he was gone and that I would go on to do great things with my life and that my life would be filled with love,” she adds. “He was the ultimate in acting selflessly for those he loved and I am definitely a more generous person now as a result of seeing how he treated others.”

With him gone in the physical sense, life lessons and attitudes remain in the hearts of those he touched the most. For Fatima, he expressed the sentiment of a Rascal Flatts song, “My Wish,” to her life without him. And there were plenty of life lessons he gave her.

“Moving ahead in life and facing things without fear,” she says. “Loving others and giving generously even if you don’t have much to give. Living in the moment. That last one is a big one. He had the ability to slow down and just be, like sitting outside, enjoying the breeze, sipping a good cold beer.”

Wagener echoes the sentiments. “Throughout his illness, his constant positivity was so incredibly admirable,” he says. “I swear I’ll never take that for granted. There isn’t a person he wouldn’t lend a helping hand to no matter how awful he felt. He was an example of strength and determination that I don’t know that I could ever be capable of and I’ll love him for sharing that with us for the rest of my life. I’m so honored to have been a part of his life and I’ll always be comforted to know in my heart that he felt the same way, not only about me or our bands, but about everyone that he held dear.”

The Eddie Thomas Memorial Celebration with Black Tie Dynasty, [DARYL], The Crash That Took Me and Go Imperial is Saturday, February 19, starting at 10 pm.

Cover photo of Thomas [far left] with the rest of Black Tie Dynasty via the band’s Facebook page.