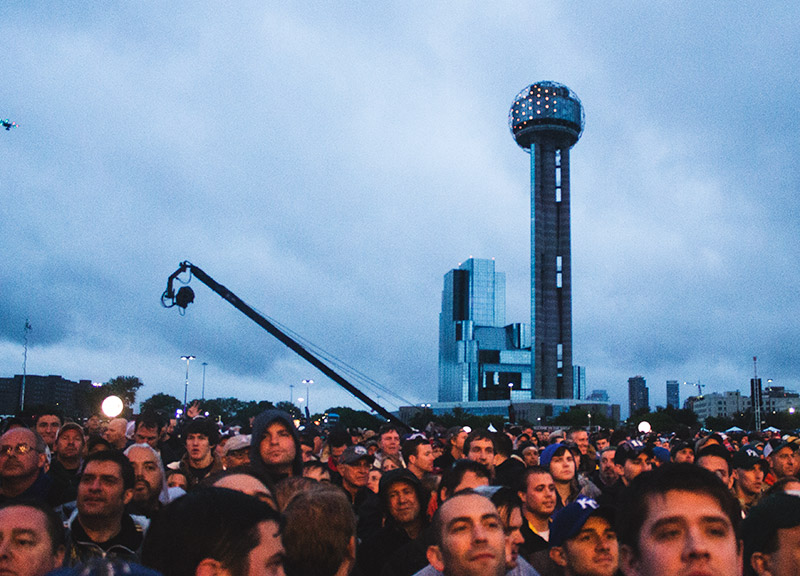 It’s more than just a catchy line from a catalog absurdly filled with hits. It’s the truth.

You can’t start a fire without a spark.

And, somewhat damp, but largely over-complained-about conditions aside, there was indeed a spark at this weekend’s free-to-attend, NCAA- and various massive corporation-sponsored March Madness Music Festival.

Credit Bruce Springsteen & The E Street Band’s incredible festival-closing Sunday night performance for that spark, if you feel so inclined. Now that the March Madness event’s weekend worth of shows is behind us, this certainly seems to be the prevailing opinion.

No one, this writer included, will argue with you there. Make no mistake: Springsteen’s set was, rather undoubtedly, the musical highlight from an affair filled with sets from big, big, big industry names.

But afford me another opinion, if you will: The longer-lasting shining star from this weekend could very well be the venue itself. To wit: Prior to this festival’s announcement, Reunion Park, so named for the fact that it’s a mostly open grass lot that sits upon the former grounds of the 2009-imploded Reunion Arena, didn’t exist. Not by this name, at least. And not for this possible use.

Now, however, one could argue that it’s the best damn feather in Dallas’ cap should the city ever hope to have a grounds that can compete with the Austin’s ACL-hosting Zilker Park or Houston’s Free Press Summer Fest-hosting Eleanor Tinsley Park when it comes to music festival-hosting options (many apologies to Plano’s Oak Point Park and Nature Preserve, I’m sure).

Granted, it took millions upon millions of dollars to turn this 40,000-person-capacity space into a viable option for a festival such as this. Naturally, neither the city nor the NCAA appear willing to part with the exact figures. But know this: Temporary stages such as the downright massive one employed by the NCAA this weekend don’t come cheap. Nor do crisp, clear and shockingly loud outdoor sound systems that, without much effort, easily trump the outputs of all area outdoor show space competition, Gexa Energy Pavilion very much included. Nor do one-off performances from the likes of Springsteen or, hell, even Jason Aldean, who headlined Friday night’s deal.

It was money well spent as a means toward seeing a city’s potential come to light, though — and especially so when you consider that it didn’t cost any of its attendees a dime.

For a while there, it seemed there was another destiny for this piece of land: In 2012, the reached a deal in which it agreed to sell the land to a developer who would transform it into a corporate campus of some sort. But, more than a year later, though that developer still holds onto the plot, there still no been action on it.

All the better: This weekend, Reunion Park revealed itself to be a relatively easily accessed and, well, just large place. Also great? The top-notch, undeniably gorgeous downtown skyline backdrop it inherently features thanks to its spot on the map.

None-the-wiser out-of-towners attending the festival — and there were plenty of ’em — no doubt left the grounds impressed, figuring that, hey, this Texas city maybe knows what its doing.

Um, well, not so much in this instance. Not intentionally, anyway. But, hey, now we might know.

And the fact that these revelations came to pass during a well-scored weekend didn’t hurt matters.

On Friday, Aldean, abetted by the best weather night of the weekend, drew maybe the biggest crowds of the festival, topping a pop-country bill.

Saturday, meanwhile, was more of a mishmash, starting with a surprisingly vigorous set from LL Cool J that found the rap icon backed up by DJ hero Z-Trip. Country star Tim McGraw followed, his set suffering from the first real rains of the weekend and, worse, the added perspective that the benefit of 10 years can have upon a once-heroic figures suddenly quite dull and sappy archives. The Killers, meanwhile, proved their catalog to be more anthemic than ever with an improved live show, which was, from the onset, threatened by thunderstorms that never came. During that set — seemingly the one moment out of the weekend when the band wasn’t camped out at the Deep Ellum bar the Double Wide, where they raged for three straight nights, starting Thursday — frontman Brandon Flowers bounced about the stage, never once allowing his energy level to dip below the glee he’d displayed at the start of his Las Vegas band’s show, when he entered the spotlight donning a varsity jacked bearing the names of the starting players from the championship-winning 1990 University of Nevada, Las Vegas’ men’s hoops team.

But Sunday was very much the standout, despite soggy conditions hurting early attendance figures. Area country-boy-done-good Pat Green suffered greatly from this, performing to a crowd that could’ve fit in his own Uptown music venue. Pop-rockers fun. followed with a decidedly inoffensive set, but one that clearly drew the youngest fans of the day. Credit to the band, too, for at least somewhat living up to its name: Frontman Nate Reuss’ monologues to the crowd were as cheesy as cheesy gets, but the impressively piped singer still projected positive vibes by rolling around in some on-stage puddles, much to his fans’ delight.

Still, where The Boss goes, all others play second fiddle, and Springsteen made this clear with his triumphant set. The 64-year-old performer refuses to show any signs of slowing down — evidenced by an extended crowdsurf during “Hungry Heart,” which followed just a few songs after the surprising cover of Van Halen’s “Jump,” which opened the show. The consummate showman, he engaged his audience all night, repeatedly pulling young fans onto the stage for singalongs and dancealongs or, in one case, climbing atop the crowd for an impromptu duet with yet another awed attendee.

And, as ever, his band was crack: E Street fixture Steven Van Zandt was a no-show, but his replacement, Rage Against The Machine’s Tom Morello, was a more than capable backup; his epic, teeth-employing solo during “Ghost of Tom Joad” was particularly mind-blowing. But his wasn’t the E Street Band’s spotlight to steal: Guitarist Nils Lofgren, fiddler (and Springsteen spouse) Patti Scialfa and sax man Jake Clemons each got plenty of shine; even Jake’s uncle, the late, great Clarence Clemons, got some love, too, as a montage of his career highlights covered the stage’s LED screens during the always energetic “Tenth Avenue Freeze-Out.”

From there, the crowd joined in on a singalong for a cover of “Shout,” which would’ve been a fine send-off, except — wait — Springsteen and Scialfa stayed out still longer for a stirring, acoustic take on “Thunder Road.” Then, finally, three hours after starting, Springsteen left the stage, waving goodbye to a crowd that wasn’t ready to leave Reunion Park behind.

For at least a few more fleeting moments, they didn’t have to. Instead, they were treated to a display of fireworks, which had apparently been replaced in the wake of the first batch’s theft last week.

And so some attendees lingered, holding on to what proved a fine Downtown Dallas weekend.

Eventually, of course, these fans too would leave. With good fortune, though, who knows? Maybe they’ll return to Reunion Park, still impossibly kicking in this incarnation, at some point down the line.

It’s a nice gun in the city’s potential concert-hosting space arsenal is all I’m saying.

And, this weekend at least, it was for hire. 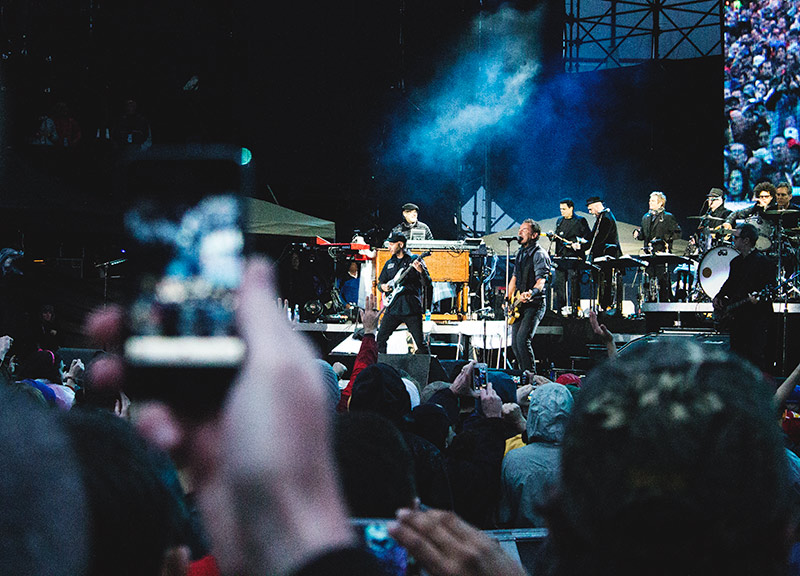 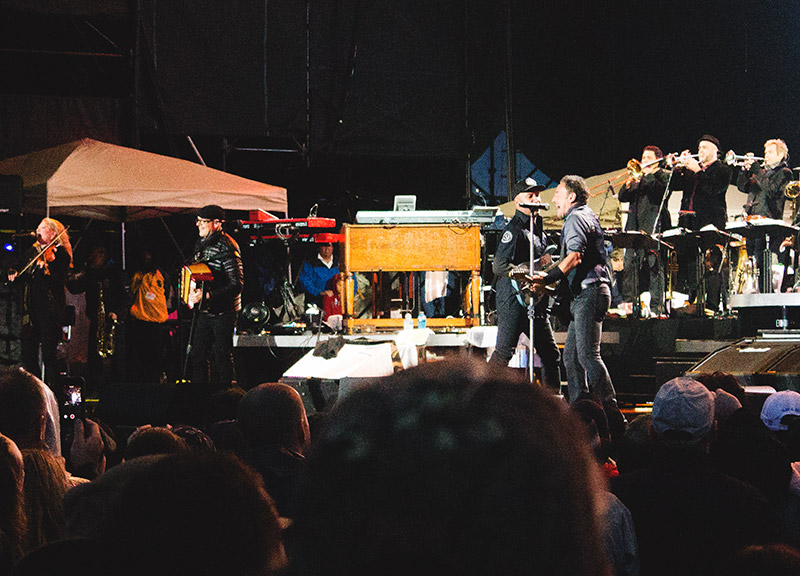 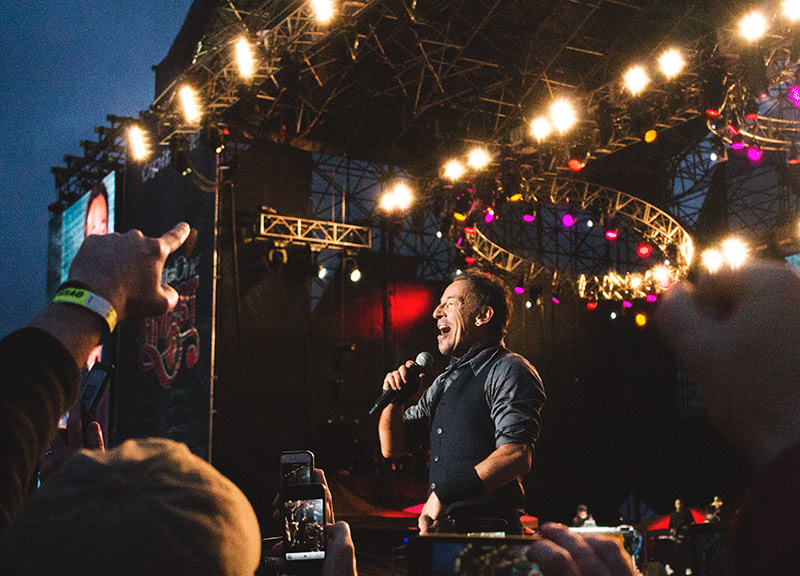 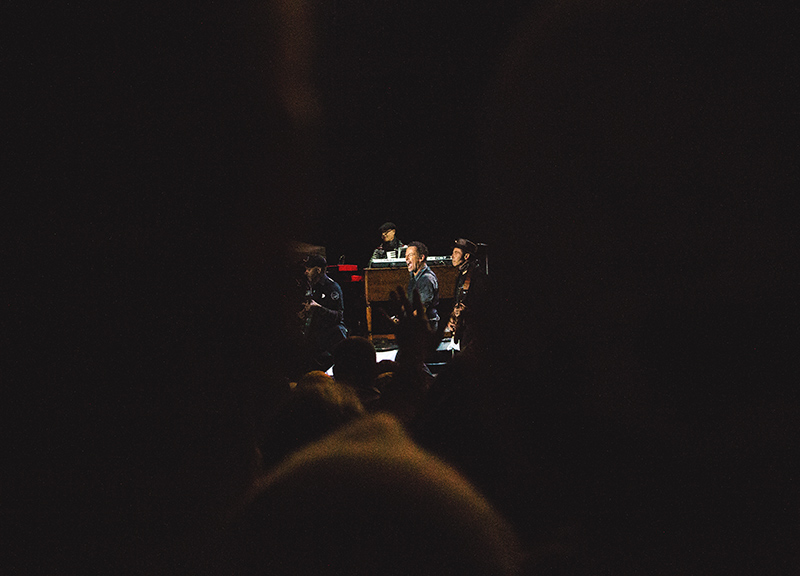 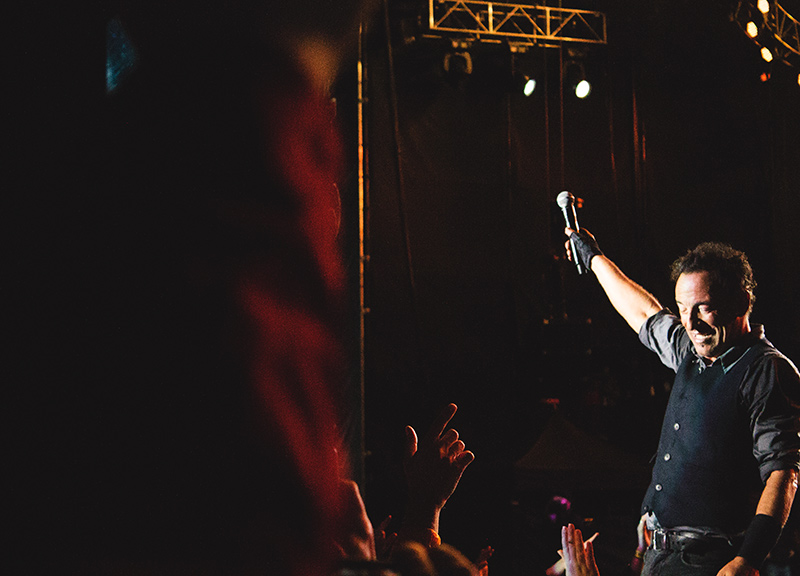 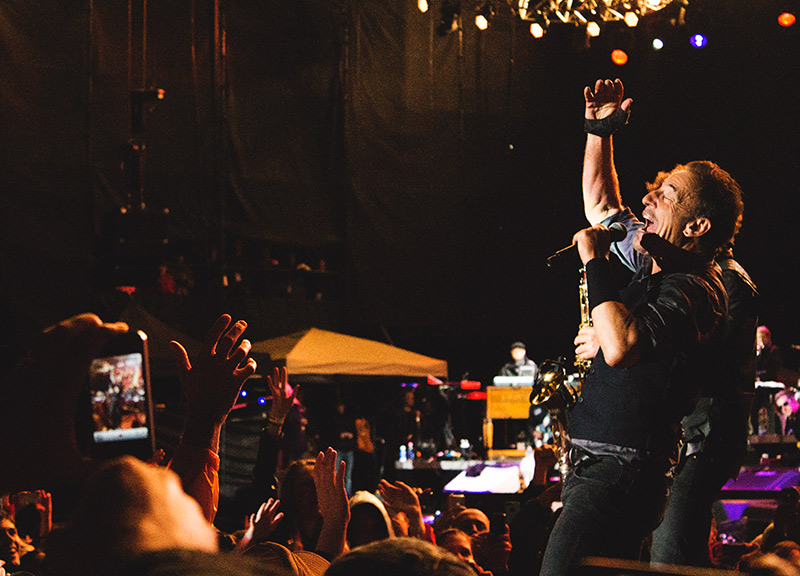 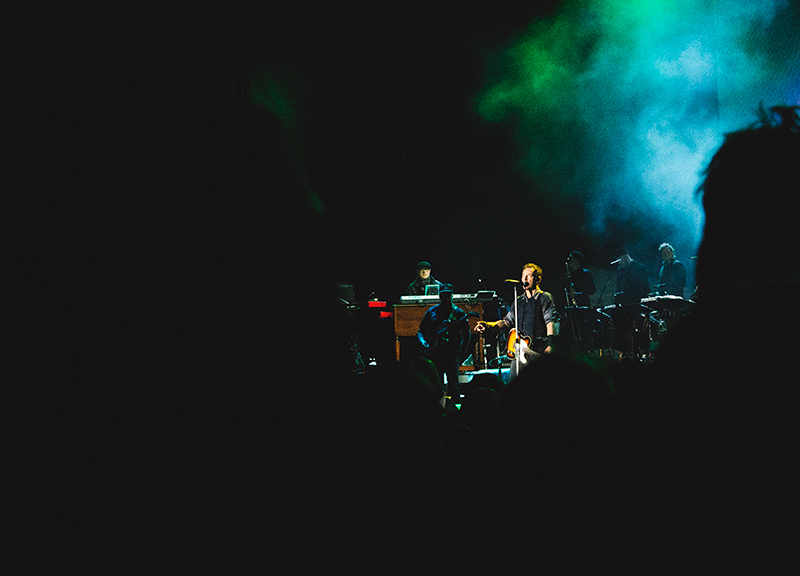 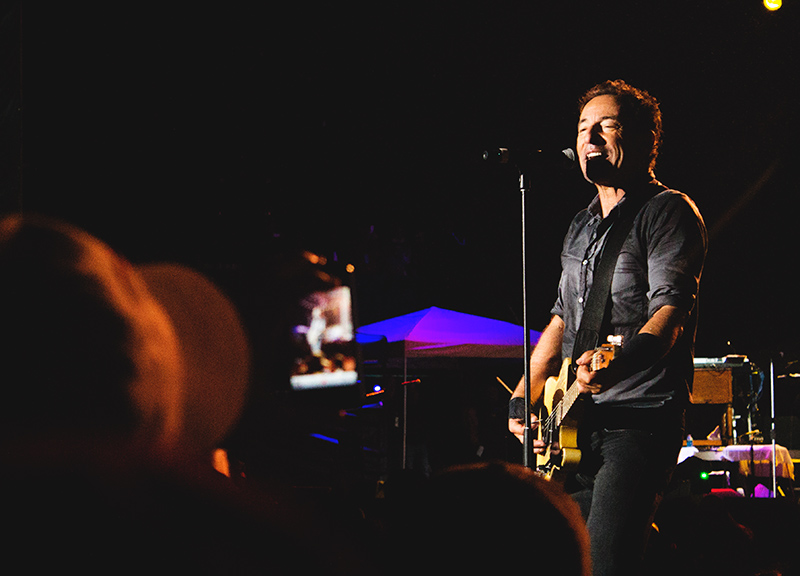 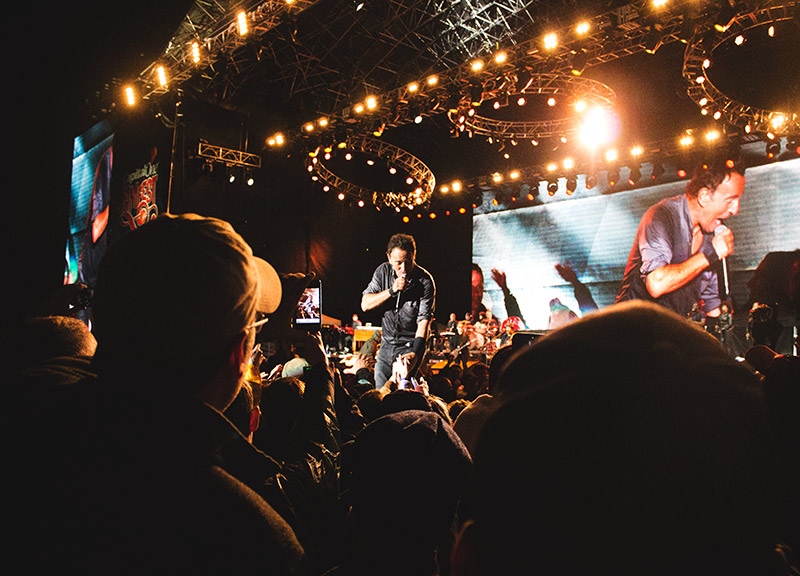 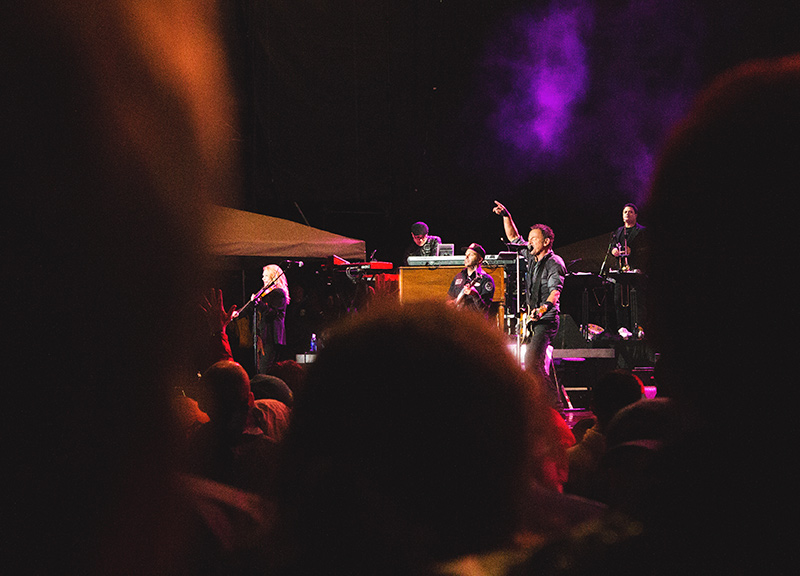 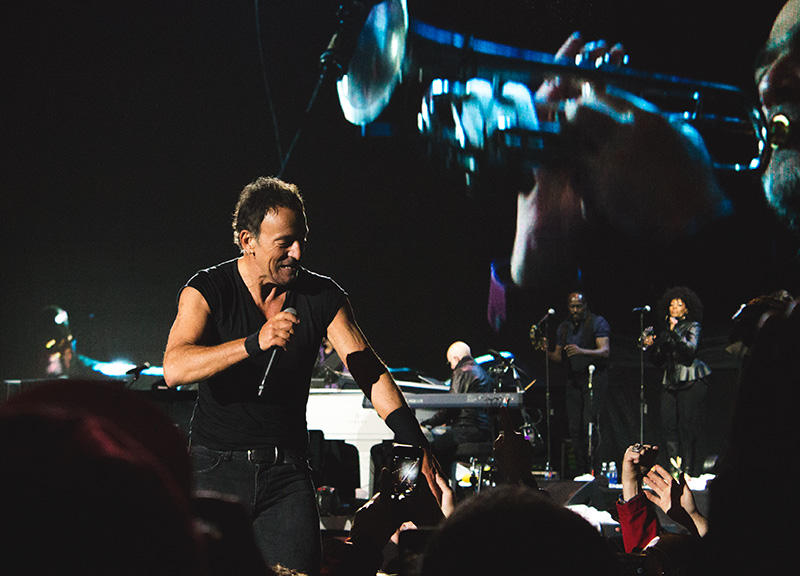 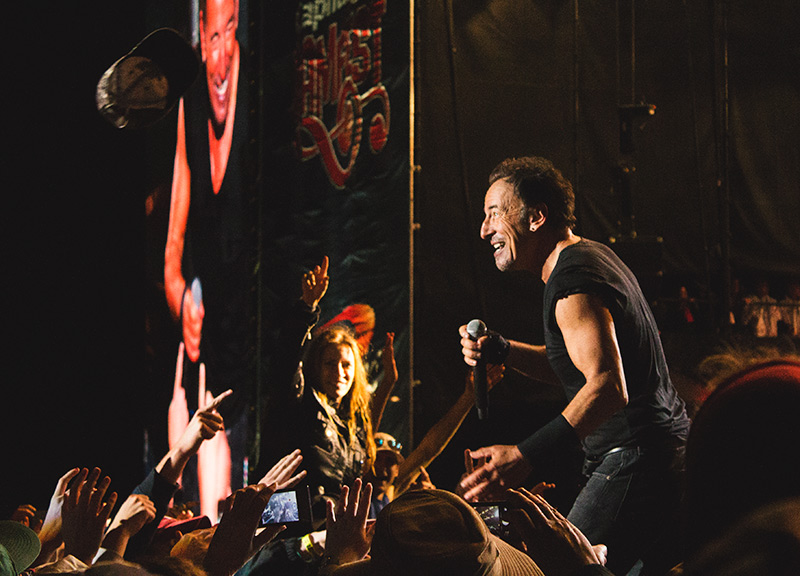 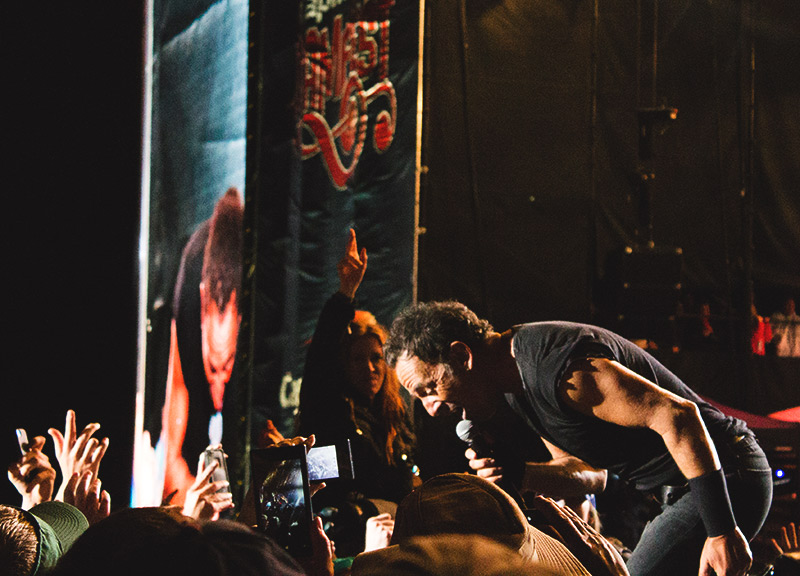 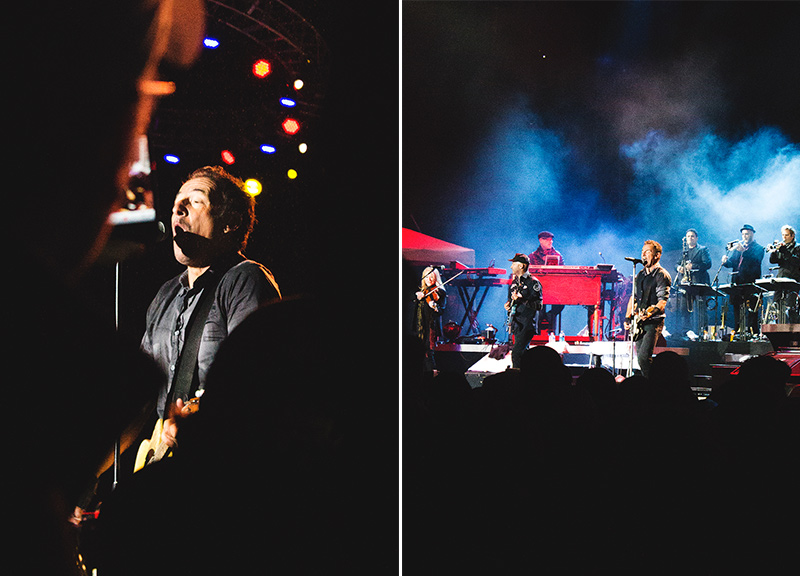 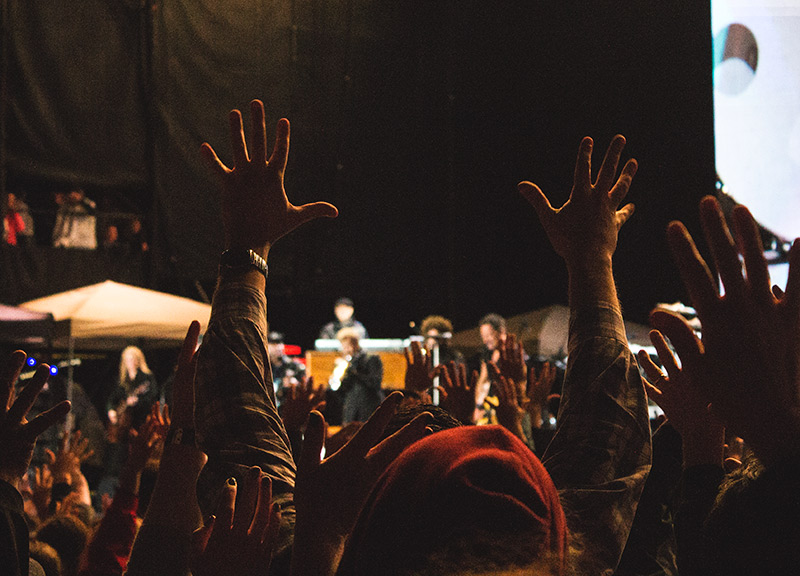 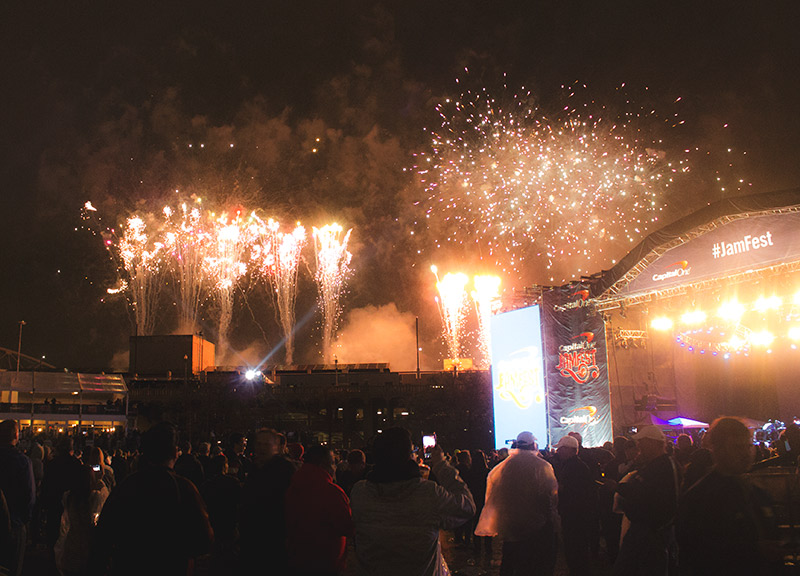 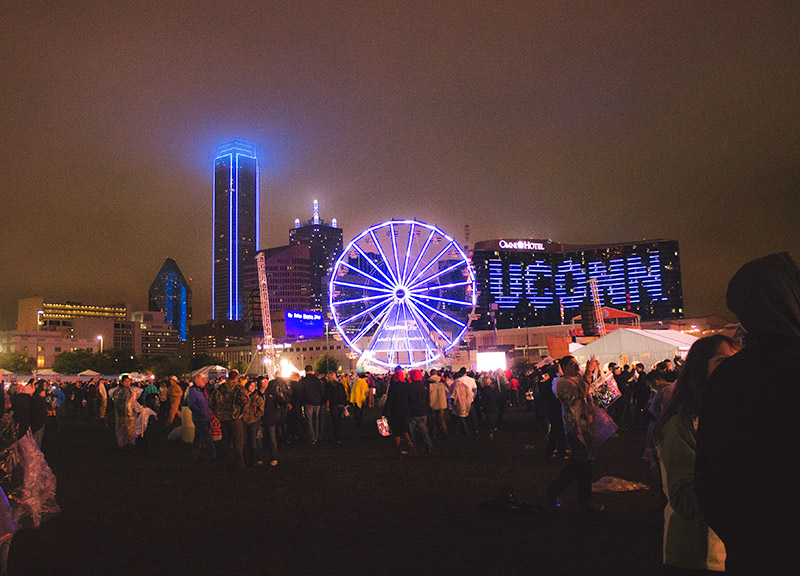 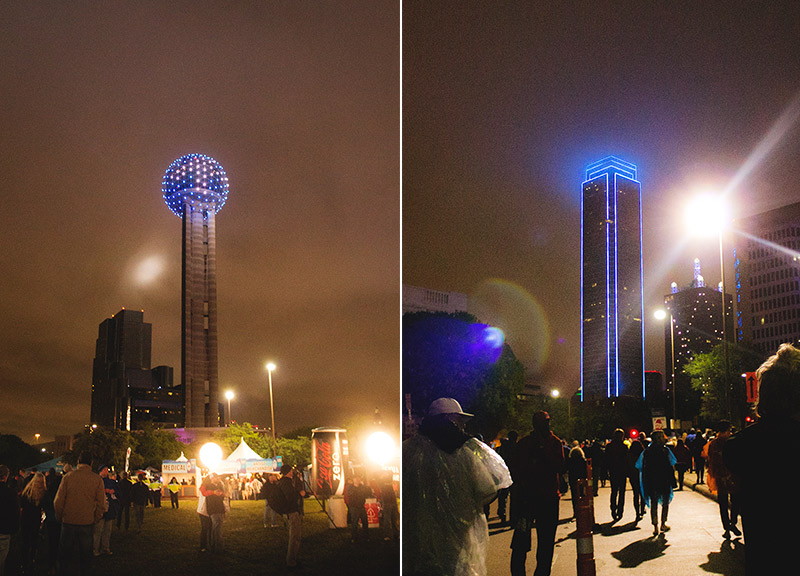