SXSW Is Pretty Much The Worst. 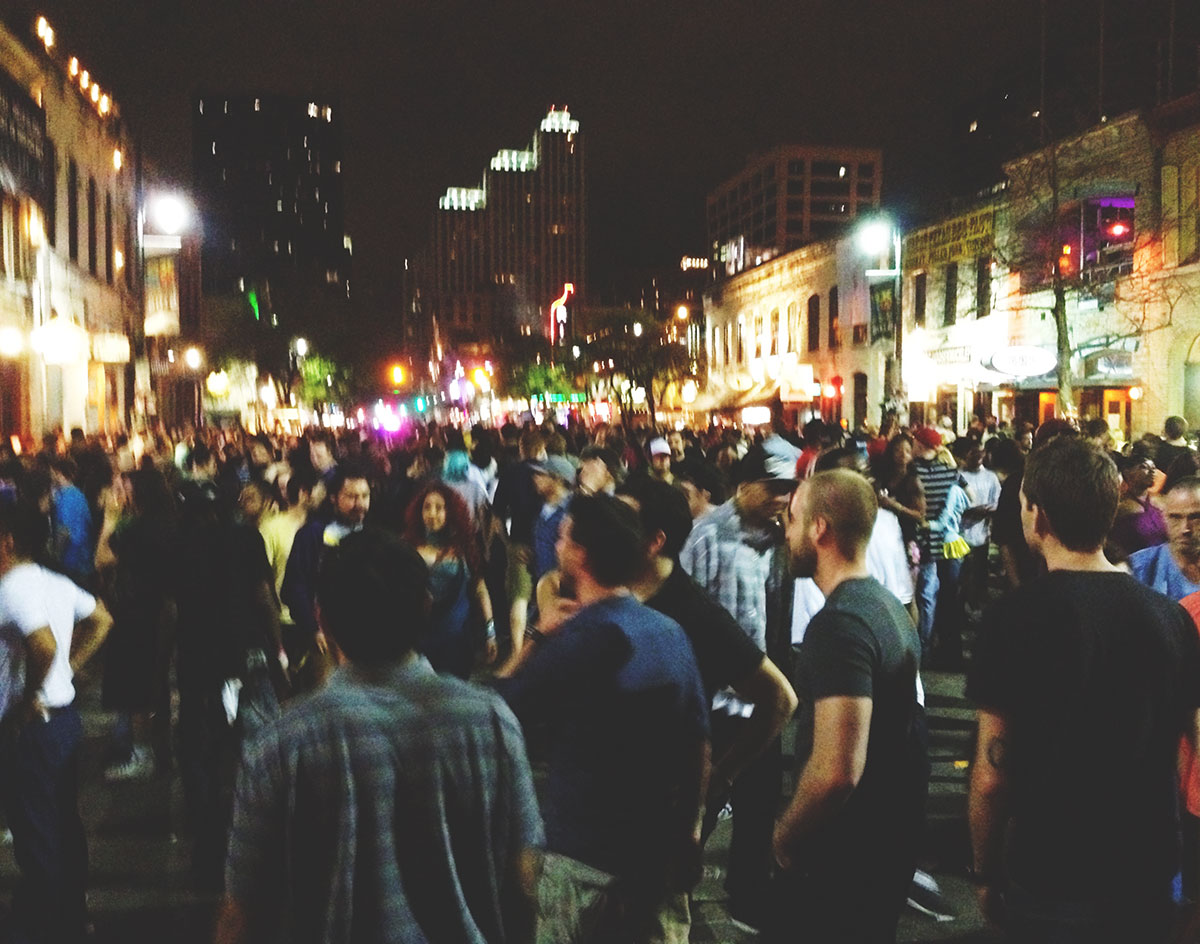 South By Southwest is pretty much the worst.

Sure, it has its occasional golden moments, ones that make the idea of coming back year after year seem like a good idea. But, as a general rule, I can think of no greater hell on earth than voluntarily spending the weekend in Austin during South By Southwest.

It could be that, for four days, the hundreds of “weird” businesses in Austin’s entertainment district make sure no square inch goes completely musically unmolested — save for the upstairs restroom at Book People, where I generally end up hiding out for most of the fest every year. Real talk, though: Do people really need to be serenaded by one band while waiting in line outside a club to see another? Has a band ever been “discovered” by a record label exec while playing the roof of a gas station? And what’s with the guy that insists on showing up year after year to play violin on the street corner while wearing a werewolf mask? Seriously, what’s his endgame?

More likely, my extreme hatred for the fest — a bigger offense than the overabundance of marketing ploys — stems from the fact that the half-dozen-or-so times I’ve made the three-hour trek south, it’s been to perform at the thing.

Most of those trips came in my early 20s, when I was still naive enough to believe that, despite not being officially invited to perform at the festival, performing in some guy’s basement — or, worse, in a restaurant in which the “stage” area was home to a booth just days before — would still be a legit way to get “noticed” by the “right people.”

With age comes wisdom, though. And, after wising to the ways of the world a bit, I decided I’d never go back.

Well, until a few years ago, that is, when I found out I might be getting an opportunity to perform as part of an official showcase with my band at the time. If ever there was a way to get something positive out of the quote-unquote South By experience — and maybe even get some sort of attention in the process — then, surely, an official showcase was it.

Let’s forget for a second that nearly every single one of the so-called “breakout” bands that get discovered by the media each year are generally all signed to major indie labels already and that they’re playing thousand-capacity venues all over the country. I mean, just look at the list of acts The Daily Beast “discovered” at the fest this year. It includes names like London Grammar, which just played the Granada; Future Islands, which just got done playing Letterman; and Charli XCX, who was partly responsible for one of the most popular songs in the country last summer.

Alas, my first time to perform at SXSW in an official capacity proved to be yet another learning experience — namely because it didn’t take me very long at all to realize that not all official showcases are equal. This is especially true if your band has been asked to back a guy whose biggest hit was about a popcorn-eating hamster on a stage in a temporary tent “venue” and you’re sharing a bill with Bowling for Soup. Though I wouldn’t trade that experience for the world, I still wasn’t really sure I wanted to ever do the whole South By thing again after it was done.

Then, earlier this year, my current band, Whiskey Folk Ramblers, was asked to play the first official showcase in its eight-year history. Despite the fact that, right around that same time, some 2,000 other bands around the country were getting that very same invite, I’ll admit it still felt pretty cool. Pair that the fact that nobody onstage would be wearing a hamster costume at this show, and that was enough to make me renege on my vow to never attend another South By.

In hindsight, it’s hard to decide whether that was the right call. Only after the fact am I now realizing that the worst part of SXSW is being in a band at SXSW.

The only tolerable way to endure the fest, which only seems to get bigger every year, is to do so entirely on foot, which isn’t really feasible when you’ve got a van-load of gear you’ve got to keep hauling around from venue to venue. Parking near the Convention Center, where bands have to go to pick up their artist wristbands, is nonexistent. Meaning? Every band we ran into in the wristband line was only at half-strength; the rest of their bands’ members, meanwhile, were endlessly circling the block in their vans. Of course, you can skip this process entirely: If every member of your band agrees to forego getting a wristband as payment, you can opt to charge the fest a $250 performance fee.

Taking the money might be the right move, turns out. It’ll help assuage the $25 fees you’ll pay to park your van miles away from the venue you’re loading into, if nothing else. Plus, it’s not like you’ll have much time to take advantage of the wristband’s other perks — like, y’know, seeing any other bands play — if your band is slated to perform, too.

Let’s assume everything else goes your way, though. Then you just might get to the venue where your official showcase is set to go down and find out that it not only has an Over the Top-style professional arm wrestling table in it, but a mechanical bull, too.

To that end, I did find a way to make my new band’s first official South By Southwest showcase an memorable one — for me, anyway. No, being the only band to ride a mechanical bull during their showcase set might not have earned us the kind of press that getting puked on or inciting a riot can. But it was, in the end, a lot of fun.

And it was memorable in the way that baseball-sized bruises on one’s inner thighs are hard to ignore the next day. Getting old sucks.

Aside from a few days worth of aching muscles, though, I’m really not sure we got out of the whole experience. We didn’t get a record deal out of it — not that any of us necessarily went in expecting that sort of thing. We didn’t pick up a lot of new fans. In the end, we didn’t really gain any more exposure than we would have if we would have played a regular Thursday night in Austin at the Hole In The Wall.

In the end, the truth is that South By isn’t designed to be beneficial to bands that have been around for more than a year or two — acts that, therefore, don’t need to squeeze every last bit of exposure out of it as they can get.

Sadly, more and more — and contrary to the event’s original intentions — it seems as if the bands that stand to gain the most these days really are the Lady Gagas, the Foo Fighters and the other music superstars of this world.

But that doesn’t mean I have to like it.