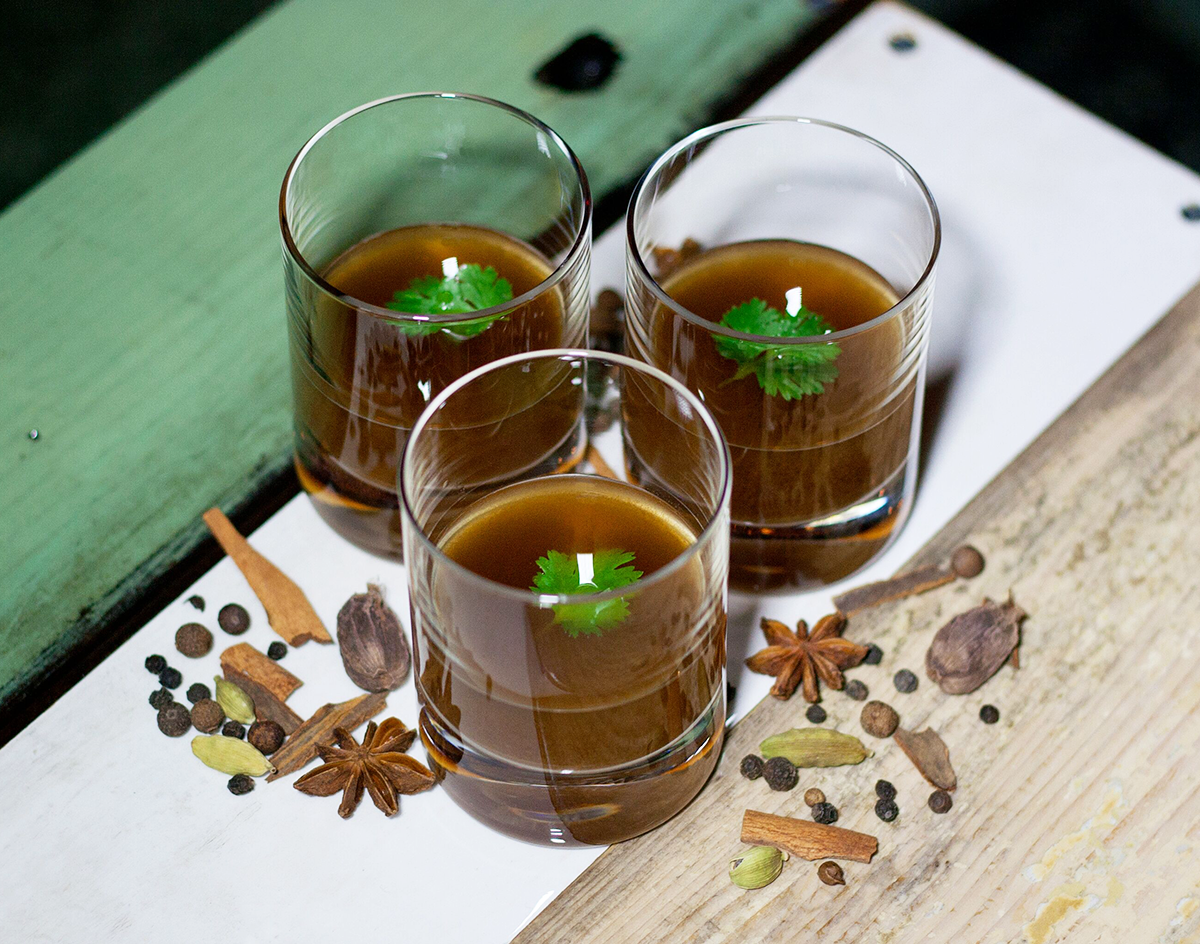 Midnight Rambler’s Twist On The Classic Bull Shot Is A Lot Like That Last, Delicious Sip Of The Vietnamese Favorite, But With A Little Vodka.

Five years ago when Midnight Rambler first introduced a pho-inspired cocktail called the Pho-King Champ on its inaugural menu, there were few reference points to similar drinks throughout the city. At that point, savory cocktails were more so a thing of lore than everyday menu occurrence.

But the drink was as much of an homage to Texas history as it was a forward-thinking, foodie-friendly libation. Although the Pho-King Champ shares the same base ingredients (beef stock and vodka) as its predecessor, the shot’s simple structure provided the bar’s creators with an opportunity to showcase some of the state’s greatest cultural and culinary influences.

“When Christy Pope and I were creating Midnight Rambler to open in Dallas, I knew I wanted to do a twist on the classic Bull Shot and decided to look to my native Houston, where the Vietnamese food scene was really starting to get national recognition,” says founder Chad Solomon. “The resulting Pho-King Champ is a Bull Shot re-imagined through the lens of Vietnamese pho with the umami turned up to 11.”

Solomon explains the name is a nod to The Fucking Champs, a now defunct San Francisco avant rock band who changed its name from ‘The Champs’ after the original namesake band of the 1950s called them out. The origin of the shot’s name is also dually-fitting, as the Bull Shot was at the height of its popularity during the 1950s.

Luckily, culinary advancements have allowed the drink to evolve past its salty beginnings, as Midnight Rambler’s iteration is made using an organic, no-sodium beef stock. Batches are aromatized ahead of time with traditional pho ingredients such as onion, ginger, black and green cardamom, star anise, cassia bark, black pepper and Allspice. The broth is finished off in true pho fashion with MSG, fish sauce, Sriracha, Hoisin, sugar and liquid aminos.

To build the shot, the aromatized beef stock is married with Absolut Elyx Vodka, 15 year-old Dry Sack Sherry, fresh lime juice and finished with a cilantro garnish. The result is an uncanny likeness to the beloved soup, with a taste akin to someone pouring a travel-sized bottle of vodka into that last, most potent sip of pho broth where all of the flavor essence has pooled itself. Notes of star anise and cardamom amplify the meatiness of the beef stock, followed by the acidity of the lime while the cilantro to complete the authenticity of the experience.

Such bold flavors in a cocktail can be pretty polarizing, as patrons have been known to either love or hate the shot. While the Pho-King Champ can be nostalgic or appealing to the curiosity of some, others have gone as far as calling the drink ‘pho-king disgusting,’ with a range of opinions between the two ends of the spectrum.

“It’s a very convivial drink because when you get a bunch of people together, you’re probably going to have a person in the group who doesn’t get it,” Pope says. “You may have four people that love it, but it’s definitely something that people talk about. Love it or hate it, you’re going to remember it.”

The drink was in fact so memorable that it was brought back as a regular menu item in honor of the bar’s five year anniversary. The originality of the shot had a way of sticking with patrons even during its hiatus, as the bar often received calls and emails checking for its availability.

Though taking group shots is a prime way to experience the concoction, the depth of flavors also makes it a worthwhile option for solo sippers. Regardless of if you’re a pho lover, have an adventurous palate or were dared by your friends to take the shot, the staying power of the drink is an example of how much the Dallas cocktail scene has grown in the past five years. It’s also a testament to the drinks of its ilk, having paved the way for the unique, savory offerings that punctuate bar menus throughout the city.

“This is sort of validation that if you build it, they will come,” Pope says. “We did what we do thinking there was an audience here that would like it.”