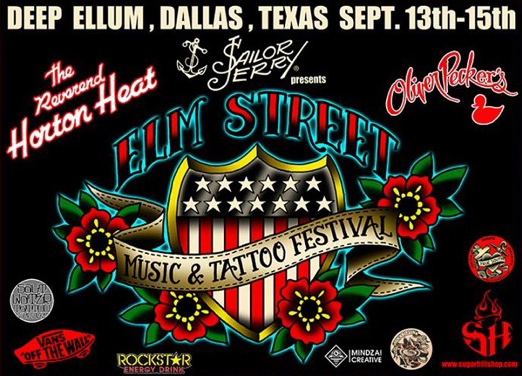 Check Out The Lineup For Oliver Peck's Elm Street Music and Tattoo Festival.

Tattoo artists from across the country will come to town to take part in this year's marathon session in a pop-up tattoo parlor inside of the Prophet Bar, then stick around through the weekend for a full-blown tattoo convention. Bands, meanwhile, will perform on stages in Deep Ellum venues Wit's End, Trees and Peck's own Three Links space.

The tattoo artist lineup has been known for some time now. The music lineup on the other hand? Not so much. Until now, as Peck and his team have released the full schedule of concerts for the weekend.

It should be noted, too, that a Thursday night-closing slot and two Sunday evening slots remain TBA — not because they're not booked, festival organizers assure us, but because other deals are getting int he way of their announcement.

You can check out the lineup as revealed so far below. Interested in attending? Head here to purchase tickets, which range from $20 for single-day passes and $100 for weekend-long VIP access.