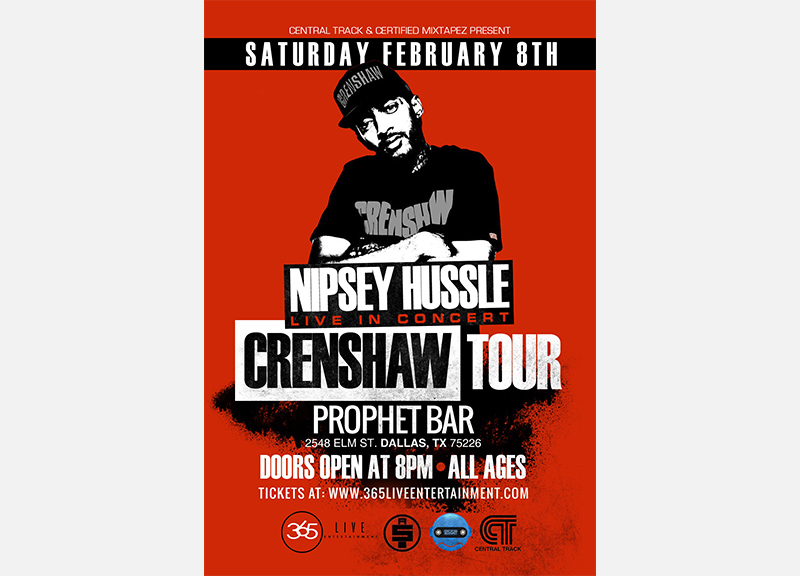 He's yet to release a proper studio LP, but to imply anything other than that Nipsey Hussle is fast becoming a major player in the rap game would be absurd.

Back in October, as you may have heard, the Los Angeles rapper released Crenshaw, his eighth solo mixtape since 2005. Per protocol, it was a free-to-download release. But it was more than that, too: In tandem with the 2010 XXL “Freshman Class” rapper posting that 21-cut affair online, Hussle also conducted something of a social experiment, releasing 1,000 hard copies of the release in a L.A. pop-up shop, promising that fans who purchased the disc would also receive a free ticket to an upcoming live performance.

Then a funny thing happened at that pop-up shop sale: Jay Z bought 100 copies of the disc, spending $10,000 in support of the fast-rising emcee. How's that for a cosign?

Anyway, our reason for sharing this story is pretty simple: On Saturday, February 8, we're teaming back up with our pals at 365 Live Entertainment — the same group we worked with on this month's RiFF RAFF show — as well as the folks over at the local Certified Mixtapez upstart to present Nipsey's first Dallas show in support of that Crenshaw release.

Advance tickets to this all-ages show just now went on sale right here and are available for $20 a pop.

We'll see you there.