What Can Piñatas Tell Us About Affordable Housing? 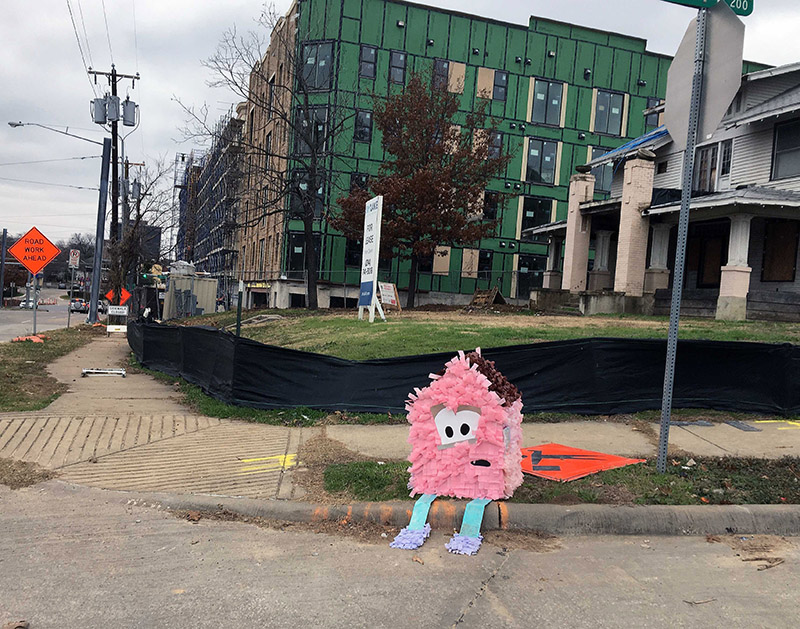 Ask anyone who grew up in Oak Cliff.

They’ll tell you that the neighborhood today is a far cry from the one they once knew. They’ll point out all sorts of examples to back up their point, from the demolished Sonic on Davis Street to the hipster spots that have begun popping up all along Jefferson Boulevard.

Local artist Giovanni Valderas grew up in Oak Cliff. He misses the neighborhood he once knew. He’s seen all these changes firsthand — and he’s had enough.

And, for the past few weeks, he’s been doing something about it. On Christmas Eve, Valderas started placing sad little piñata houses he’d made throughout Oak Cliff — namely around the Bishop Arts District and other areas currently undergoing top-to-bottom gentrification. His goal is to raise awareness about the disappearing affordable housing market in Oak Cliff through an approachable, possibly even cute, starting point. 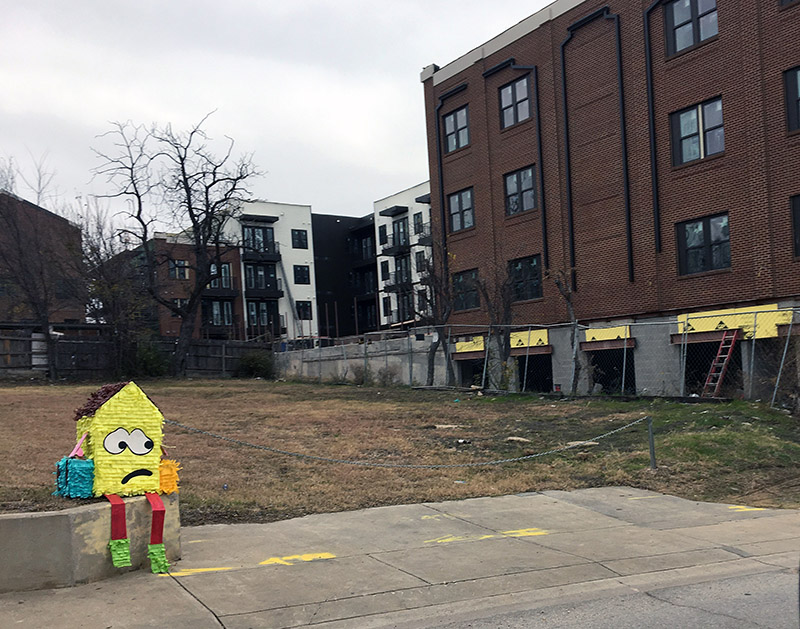 “This was something that could let people’s guard down,” Valderas says of his piñata project. “Everyone has a positive association with [piñatas], so it gets people’s attention. It’s a slow reveal. Someone could be sitting in traffic, and they’ll see it, and they’ll start putting one and one together, and they’ll hopefully see that it symbolizes people being displaced.”

Valderas calls the project Casita Triste, which translates to “Sad Little House” in English. Here’s how he describes the project on his website: “Inspired by the brightly painted homes found in predominantly Latinx communities, Casita Triste aims at highlighting cultures that are integral to our community’s social fabric. Today, these vibrant neighborhoods are rapidly disappearing and being replaced by luxury condominiums and apartments which are often subsidized by city tax dollars.”

Those neighborhoods, which were seemingly everywhere when Valderas was growing up in this past of Dallas, are fast becoming a thing of the past. And that worries him. As a kid, his parents would move from apartment complex to apartment complex around Oak Cliff, but it his extended family — uncles, aunts, cousins — were never far, since they too found themselves in similar living situations around the area. Now that apartment buildings and homes in the area have undergone significant redevelopment and started targeting more affluent residents, he fears that the sense of family that always made Oak Cliff feel so special to him might be disappearing.

Valderas says he he didn’t notice how massive the changes in Oak Cliff were until around 2012, when he moved back to Dallas from Denton after completing his MFA at the University of North Texas.

“I was sitting at a red light on Fort Worth Avenue and I saw that a bunch of buildings had been knocked down,” he recalls. “I had always wondered why they hadn’t started building something yet. And it hit me that, once they did, they wouldn’t be building anything for us.”

Since that day, he’s watched on with frustration as his neighborhood has become a playground for developers and young Dallas socialites. In his eyes, ongoing construction projects in Oak Cliff like the Bishop Arts Gateway, which received $11.25 million in incentives a few years ago, are proof that the city’s leaders are more interested in making Oak Cliff accessible to the already well-off than affordable for the people who are already there.

“When they start knocking down huge plots of neighborhoods and start building fancy buildings, it sends a clear message that this isn’t for us,” Valderas says.

In 2017, a Harvard University study found that affordable housing in Texas is harder than ever to find, pointing out how rising rents and living costs are well outpacing salary increases. It also noted how some two million urban dwellers in Texas, many of whom rent, spend between 30 and 50 percent of their incomes on housing expenses — a percentage that renders moving up the income ladder nearly impossible.

For Valderas, who spends his days working as the assistant director at Kirk Hopper Fine Art, Casita Triste represents an opportunity to make contemporary art accessible and relatable to a community that sometimes is intimidated by art by using a symbol they are familiar with — the piñata — and by focusing on a topic that they understand all too well.

“[Casita Triste] talks about the current conditions and what people are facing,” Valderas says. “It also provokes discussion — and maybe change — through a visual vernacular that people can identify with.”

And it will continue to do so. Valderas says he plans to keep placing piñatas around town for some time — at least until he gets some sort of reaction from the city’s leaders about the issue. At the same time, he hopes that the project will inspire the people living in Oak Cliff to get involved in the conversation, too.

“I hope [the piñatas] are a catalyst to get more Latinxs involved in voting and running for office,” Valderas says. “We don’t have that representation here. The city thrives on our apathy. If we got active, there would be more individuals dedicated to working for us.”