Wait, Houston Beat Dallas To Having An Erykah Badu Day? 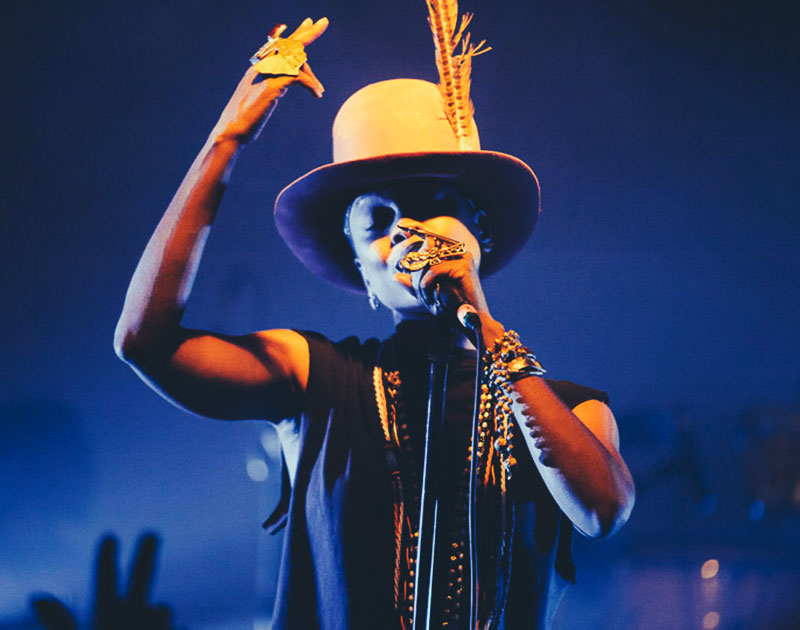 A Pair Of Teenage Erykah Badu Fans Worked With Government Officials To Get Their Hero Honored With Her Own Day In Houston. Will Dallas Follow Suit?

Everyone knows this much: Erykah Badu is an international icon, a bona fide star known far and wide across these United States, a hero throughout Texas and as close to royalty as exists in her hometown of Dallas.

So, while it’s no surprise to find out that the renowned R&B singer recently saw yet another honor bestowed upon her, the fact that this most recent award came to her from the City of Houston before the City of Dallas decided to itself offer her the same — well, that’s at least a little surprising. But the fact remains: Houston somehow beat Dallas to the punch of proclaiming a day in its history as “Erykah Badu Day.”

That honor was given to the Queen of Neo-Soul in Houston this past Saturday, May 27, and it came through the hard work of a 16-year-old Badu fan from Dallas named Moriah Osley and her 17-year-old god sister Rye’Ann Earls from Houston.

After making plans to visit together and attend a Badu concert at Houston’s Arena Theatre on that date, Osley conspired with Earls to reach out to the local government in that city in advance of the show to check in on the possibility of having their hero honored by the city for her years of commitment to the arts and the youth of Texas. And not only did they convince Houston’s powers that be to help them pull it off, but they even themselves wrote the words that the city would print on its official document.

Here, courtesy of Osley, is a picture of the official proclamation from the City of Houston, forever proclaiming May 27, 2017, as “Erykah Badu Day” in Houston. 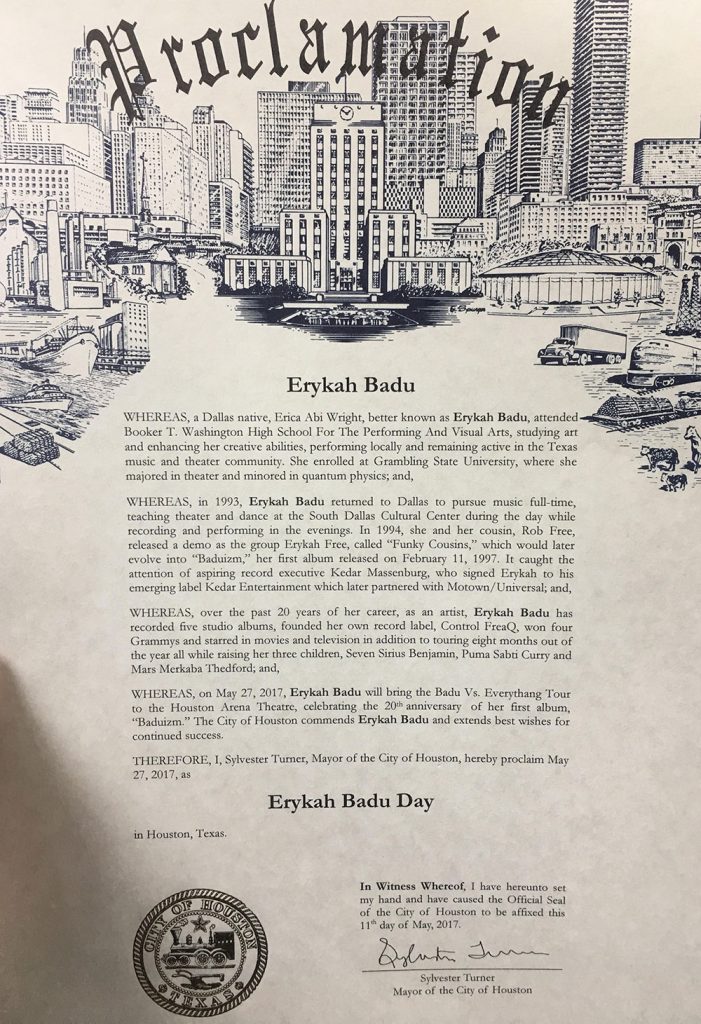 In an email to Central Track, Osley, herself an aspiring musician, further explains her motivation making this honor happen. And, well, since it’s an impressive explanation, we’re just going to run her answer in full:

“Just her as a person, she deserves it. She’s taught us a lot, she’s part of the reason we believe we can actually make it in this industry. Presenting her with a day is just something we wanted and believed should happen. She’s a legend and she deserves all the credit she’s due. She’s been doing this for over 20 years, all while raising a family. She’s a huge role model for kids like us. She’s what we aspire to be when we grow up.

“We grew up off of her music and her movement, so it was important to us that we recognized and acknowledge her in some way, especially considering this year is the 20th anniversary of Baduizm. For many, she’s more than just some singer someone heard on the radio; she’s a healer, a teacher, a role model and, to us, she’s even more — she’s [like] a second mom, and we just love her. She makes music you can still listen to 20 years later. It holds stories, lessons and morals, and that’s hard to find in today’s music.

“We just wanted to show her that all of Texas loves her. There’s not a single person that I know of in the City of Houston that doesn’t love her or at least know of her. Houston loves Badu, and Texas loves Badu in general. Her name carries a lot of weight across this entire state — not just Dallas. She’s appreciated in Texas. She’s from here, so she’s important. And she was coming to Houston to perform, so it was a perfect scenario to present her with her own day.

“We just want her to really understand how important she is, and how much she means to everyone. Her movement is grand, and it should be acknowledge as such.”

So, was Erykah appreciative of the gesture? You bet she was — to the point of inviting Osley and Earls onto her stage mid-set during her show in Houston that night so the pair could present her with a framed copy of the proclamation, and so that Badu could in turn thank the two for their efforts.

One question remains, though: Will Dallas follow suit? Well, it should, for crying out loud. It’s a little embarrassing that Houston beat Dallas to the punch, frankly.

But, hey, if Osley and Earls have anything to say about the matter, we’d guess it’ll happen sooner than later.