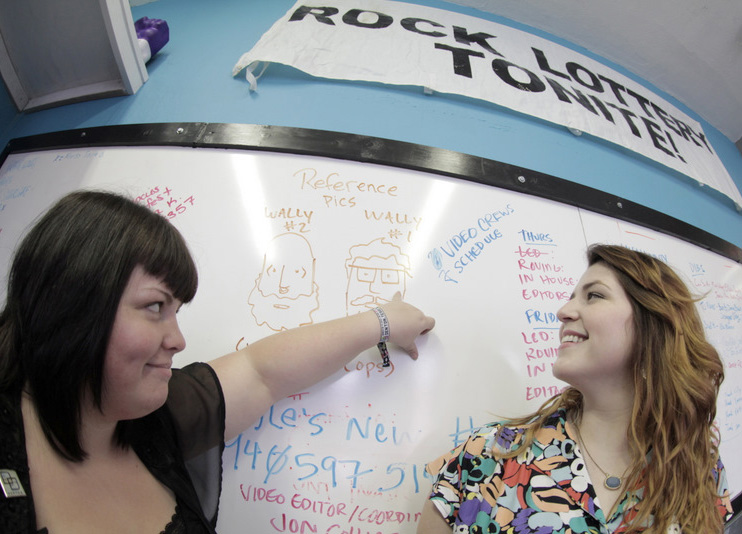 With Its Lead Financial Backer and Top Organizers Out, What's Next For 35 Denton?

Five years after its formal launch, the 35 Denton music festival currently finds itself in a state of flux.

In the past few months alone, the highly regarded, walkable, four-day festival centered around Denton's main Square has lost its programming director, its creative director and its top financial backer.

Programming director Natalie Davila was the first to leave, resigning from her post at the festival shortly after its completion in March of this year. Next, Little Guys Movers — who, in the final months of their partnership with 35 Denton, even went so far as to house the festival's offices within its own corporate headquarters — forfeited its stake in the venture in May, leaving the festival without much capital to rely upon. Creative director Kyle La Valley's departure is the most recent; moments ago, she released a statement announcing her decision to step down from her position.

Her note reads, in part: “After three awesome years with 35 Denton, I've resigned my position as Creative Director to pursue other projects… It is my sincere hope that 35 Denton moves forward in the future.”

Adds La Valley in a separate phone call about her decision: “I spoke to the staff and our sponsors and everything to make sure they knew what was coming. I'm just looking to pursue some other ventures. And I've come to a place with the festival where I feel comfortable moving on to other things.”

Hers is a sentiment echoed by Davila, who passes along the following statement: “I feel very fortunate for the opportunity to have worked on an incredible project in a truly special town. I am forever grateful to all of the wonderful people I had the pleasure of working with, and I remain extremely proud of what we all accomplished together.”

Much to their credit, La Valley and Davila had indeed accomplished plenty in their two years with the festival. Since pairing up to take over the top positions within the festival during the run up to its 2012 incarnation, the two essentially re-branded the entire event from the ground up.

On the name front, they transitioned the previously so-called “Conferette” to its current “35 Denton” moniker. Visually, they re-energized the entire affair, earning plaudits for the festival's edgier, more youth-oriented and viral-focused promotions. And, although their talent-buying decisions certainly at times opened their organization to criticism, their moves also helped the festival craft a definitive, underground, see-it-now-before-it's-bigger-later aesthetic.

This year, the La Valley and Davila also helped the festival develop a partnership with the formerly pop-up and now-permanent indoor space The Hive — a move that ended up proving a festival-saving one after heavy rains poured down on this past March's event.

Now, however, their professional ties to the festival have been formally cut.

But, although Davila has moved to Chicago in the wake of her departure from the festival, the Hive relationship is one La Valley at least intends to continue. She will remain on-board as a collaborator with that planned 1,000-person-capacity Denton venue as it works toward its planned fall opening.

La Valley's decision does mean, however, that the festival's offshoot Hot Wet Mess affair is no longer — at least insofar as its connection to 35 Denton.

“I'm still looking to do other events where I can,” La Valley says.

For now, though, even as she says she's potentially open to working with the festival again at some later point in life, it's clear that those events she speaks of are decidedly not related to 35 Denton.

“It's been a great experience,” she adds. “There just wasn't much movement in the direction I thought it was headed.”

Of course, with Little Guys, La Valley and Davila all out, the question of whether there's any movement at all to be seen in 35 Denton's future is now raised.

Far as he's concerned, though, festival founder and current majority shareholder Chris Flemmons, who's currently on a national tour in support of his own Baptist Generals band's first album in a decade, sees these departures as just another hurdle to be faced by an event that he expects to keep happening for years to come.

“We're in a reorganization process,” he says when contacted between tour stops. “But we've reorganized almost annually. The festival continues. We just have to do more fundraising and get more steady.”