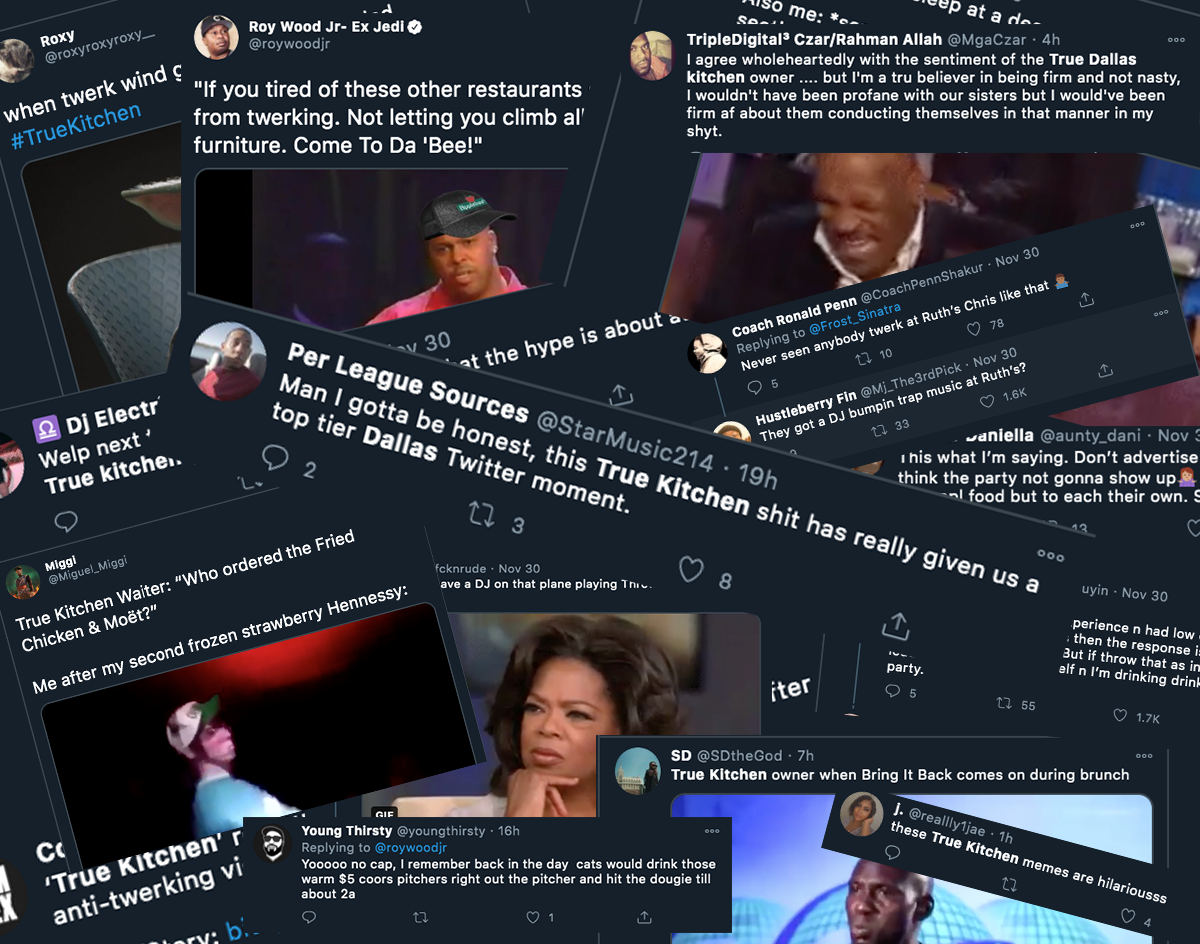 A Downtown Dallas Restaurant Gets Clowned On All Over The Internet’s Most Unforgiving Platform After An Anti-Twerking Rant Goes Viral.

Every day there’s a new main character on Twitter, and you better hope and pray you haven’t been casted for that role. The main character is the punchline of the day — the content cow milked for the masses.

Such was the case for one particular Downtown Dallas restaurant owner that peaked at  no. 7 on Twitter’s trending topics section on Monday.

True Kitchen & Kocktails made both headlines and memes after owner Kevin Kelley was caught on viral video issuing an “anti-twerking rant” a la Aunt Myrtle.

Allegedly, Kelley had repeatedly asked his guests to refrain from twerking on the furniture before the viral moment was caught on camera.

“Don’t bring it here because we’re a restaurant, and so beyond that, 75 percent of my customers are ladies and I want men to show respect … for how they carry themselves here,” Kelley says in the video. “So how can I tell the men to respect themselves and you [women] are twerking on glass here? If you wanna do it, get the fuck out my restaurant because I did it for our people and I did it for our culture. So don’t do it again. I don’t want to hear it. If you don’t like it, get out because I don’t need your money. I need to provide something for my people. Don’t do it again. Thank you!”

No matter — this is the internet, and in the court of public opinion, there doesn’t seem to be a definitive ruling on Kelley’s actions.

Me at “ True kitchen and Kocktails”minding my own business 😭🤣 pic.twitter.com/0xxhpbqxBm

Now, from a business owner’s perspective, there are risks to people throwing ass on glass such ass lawsuits, which True Kitchen + Kocktails did address in a lengthy Instagram post. But for some spectators, that wasn’t enough of an explanation for why  Kelley addressed his guests the way he did.

Though it was saturated with memes, the internet sparked a greater conversation — Who decides the culture: ownership or the people? Is one gatekeeping more than the other? This isn’t the typical internet fodder we’re used to seeing fueled by a Ken or Karen who is upset about having to wear a cloth on their face.

Based on the varying takes filling the online conversation, it’s possible that everyone mishandled the situation, but that didn’t stop the immediate takes from all sides.

In True Kitchen restaurant off 2 shots & making sure I’m within culture lines at this establishment pic.twitter.com/0IlRpJl8mL

There were some folks who disagreed with the way that Kelley, as a business owner, acted in his delivery. Though it was in his right as a business owner to address his guests’ behaviors, some felt his method was less than professional.

The owner at True Kitchen : pic.twitter.com/6qOxUs4AQz

The DJ was playing ass throwing bangers at brunch, after all.

As fate would have it, the song that apparently caused all of this commotion in the first place was, according to Green Source LLC on Facebook, none other than Dallas rapper Lil Ronny MothaF’s iconic, ass enticing anthem “Circle (Throw Dat Ass In A Circle).”

Of course, the video made its way in front of the Dallas native himself, and he had something to say.

The Owner At Tru Kitchen Need To Give That Dj A Raise …. if u Did it for the culture of dallas 🗣 HE WAS PLAYING A DALLAS CLASSIC AND DALLAS PEOPLE REACTED TO IT ACCORDINGLY 🤷🏾‍♂️😂 THROW THAT ASS IN A CIRCLE ⭕️!!!

Mr. MothaF does has a point here.

Add that to an environment with signature drinks and it’s a recipe for inevitable fun. You already know what’s about to happen when you hear those strings and that Dussé slushie starts getting a little watered down.

You serving this and playing music and think muthafucka not gonna twerk fucking delusional pic.twitter.com/aw2ihPbWF5

I would NEVER go to True Kitchen (@TrueKK_) restaurant (Dallas, Texas) The owner Kevin Kelley talking to his customers like they are beneath him is disgusting.

You want a certain kinda of crowd:
1. Don’t play twerking music.
2. Put it in the policy.
3. Don’t be a misogynist. pic.twitter.com/0YY1ZhN3bA

Still, some felt as if though an environment mixed with music and alcohol still doesn’t give patrons an excuse to wild out at brunch. Many echoed that it’s all about self-respect, as Kelley preached in his initial speech.

We not talking about that statement enough for me.

He was pointing out a valid double standard; not saying women’s actions control men’s actions.

If men have to be dressed and classy, then women can’t put their feet in the seats and asses in the air.

I don’t understand how that’s not fair.

Y’all not going to TruLucks, Maestros, Capital Grill, Perry’s, or any other WHITE OWNED restaurant and twerking. I understand where the owner of True Kitchen talking about. He said put some respect on his shit and treat it like y’all treat white restaurants. Period

it’s been times they are already playing Megan the stallion and cardi B.. nick and Sam’s play this type of music… trust me I know…I’m there faithfully it’s my favorite spot https://t.co/NFfdr1Q8pl

If I’m politely letting you know multiple times you are disrespecting what I’m building it’s going to be a problem.. ..bootlicking??? How can you say that 😂 in all reality you are saying Sophisticated black businesses shouldn’t be respected only sophisticated white 😂 https://t.co/Iap0w1jqq7

True Kitchen: Twerking is unacceptable in my restaurant!

Meanwhile at the Masa in New York: pic.twitter.com/axE201oMDC

This raises another question: Is this situation revealing a deeper-rooted issue of complications in the relationship between southern Black culture and respectability politics?

Dallas settled desegregation through conversations between Black folk and white folks, no marches in the streets. Built up a whole community, Hamilton Park, just for Black folks so they would not integrate. Had a tri-cultural group of white, Black and Latino leaders. It's wild.

From what I saw, it wasn’t funny and he tried to dave face by saying “for the culture”, that ain’t it baby. We dance, we laugh, we eat! Period! We need to start taking ourselves seriously 😒 that’s so frustrating.

No matter what angle you approach this kaleidoscopic issue, at the end of the day, it’ll always be Dallas.

True kitchen waiter: who had the red velvet waffles?
Me, gone off the dusse lemonade: pic.twitter.com/5xe61vZg2b

Besides, we have to raise one final question: crowded indoor dining during a pandemic? The only presence winning in this situation is COVID-19.

Yes so True Kitchen drama, throw that ass in a circle, twerking, lit off bottles of Dusse, the owner was trippin, yes all of that but did we see ALL THOSE PEOPLE!?

IN THE MIDDLE OF A PANNY!? pic.twitter.com/T65qu7fiD9