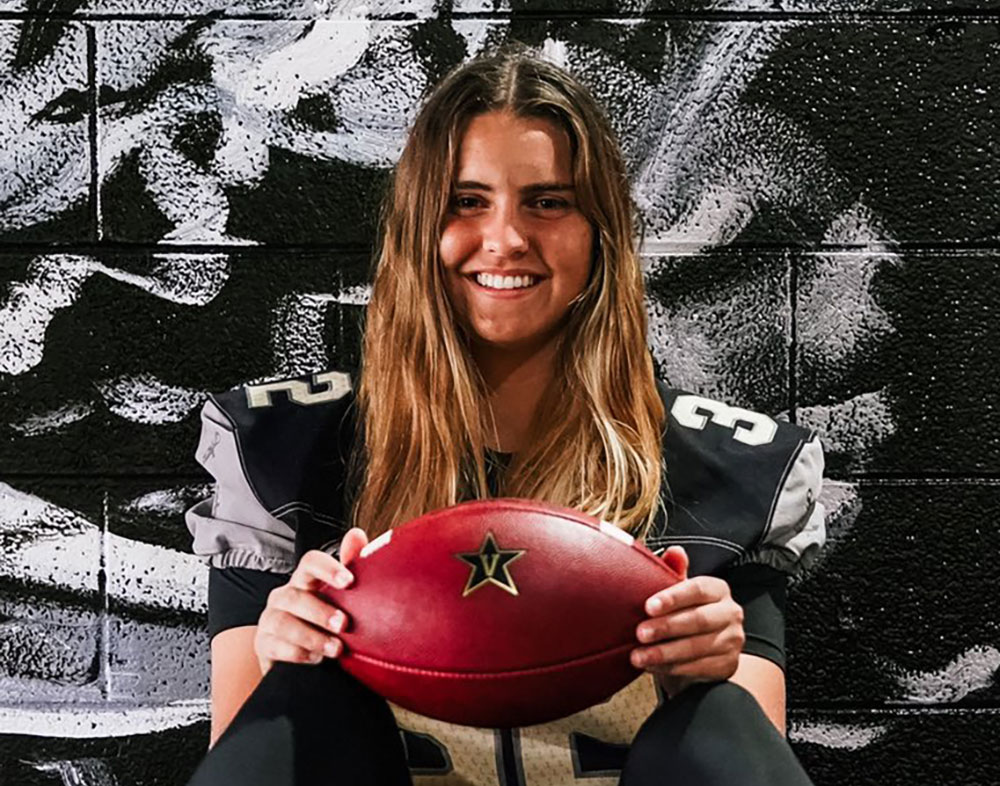 The Vanderbilt Senior — And First Woman To Ever Play In A Power 5 College Football Game — Will Play Goalie For The University Of North Texas Next Year.

Update on December 16, 2020: It seems Sarah Fuller’s historic college football career has come to its end.

Yesterday, Vanderbilt’s final game of the 2020 season — an away game at the University of Georgia — was canceled (following earlier postponement) after it was determined that her Commodores wouldn’t be able to field enough players for the contest due to too many coronavirus infections. Interestingly, it was similar circumstances that saw Fuller borrowed from her school’s soccer team, invited to join the football team’s special teams unit and placing the 21-year-old into her historic position in the first place.

In a tweet acknowledging the end of her football career, Fuller thanked her teammates and coaches for welcoming her as a peer: “I was accepted as an athlete and a true member of this team. This is an experience that I will never forget and will cherish forever.”

The 21-year-old scored her first point late in the first quarter of her Vanderbilt Commodores’ Saturday home contest against the Tennessee Volunteers, when she kicked an extra point to tie the game at 7-7.

Sarah Fuller just became the first woman to score in a Power 5 game.

After the kick, referees made sure Fuller received the game ball from that history-making effort. And while her team would eventually lost handily by a score of 42-17, Fuller was at least able to end the day on a high note, kicking in a second extra-point effort following a touchdown scored by her team in the fourth quarter.

With one game still left in the Vanderbilt football season next weekend, who knows what final tricks Fuller could still pull out of her hat? Perhaps a field goal is in the cards? We’ll see.

Either way, the University of North Texas — where Fuller will play soccer next year as a graduate transfer — must love watching their future goalie kick so much ass from afar this year.

They might just make a movie about Sarah Fuller one day.

The 21-year-old Wylie native made history as the first woman to play in a Power 5 college football game when she booted the second-half kickoff for Vanderbilt University in the Commodores’ away-game matchup against the University of Missouri on Saturday.

HISTORY MADE 👏@VandyFootball’s Sarah Fuller is the first woman in college football history to play in a Power 5 game. pic.twitter.com/zhSaLqa3Bg

Though not the first woman to ever play, or even kick in an NCAA Division I Football Bowl Subdivision game — University of New Mexico’s Katie Hnida attempted an extra point in 2002 and then successfully scored two extra points in 2003, and Kent State’s April Goss later scored an extra point in 2015 — Fuller’s accomplishment is likely the highest-profile of the bunch.

With celebrities cheering her on through social media and Vanderbilt’s head football coach Derek Mason stifling any trolls and all expected haterade, Fuller accomplished her milestone with a “Play Like A Girl” sticker on the back of her helmet.

The world watched as @SarahFuller_27 made history.

She broke barriers and inspired the next generation by becoming the first woman ever to play in a Power 5 college football game. pic.twitter.com/aTBrn8PQah

A senior and goalkeeper on Vanderbilt women’s soccer team, which won an SEC title earlier this year, Fuller will transfer closer to her hometown of Wylie and attend the University of North Texas for the next academic year. There, she will join that school’s women’s soccer team as a graduate transfer and as its expected starting goalie.

Just a few weeks back, Fuller’s glass ceiling-shattering moment wasn’t even a glint in anyone’s eye. But after most of the Vanderbilt football teams’ kicking specialists were forced to sideline before this weekend’s game because of COVID-19 protocols, coaches looked Fuller’s way for some help. Now, she’s been named one of the SEC’s special teams co-players of the week for her feat.

Plus, she’s become a national media darling. No offense to the other student-athletes up in Denton, but Fuller’s almost guaranteed to be the most famous athlete on the UNT campus next year.