[Q&A] Catching Up With The Ceiling-Shattering Sarah Fuller. 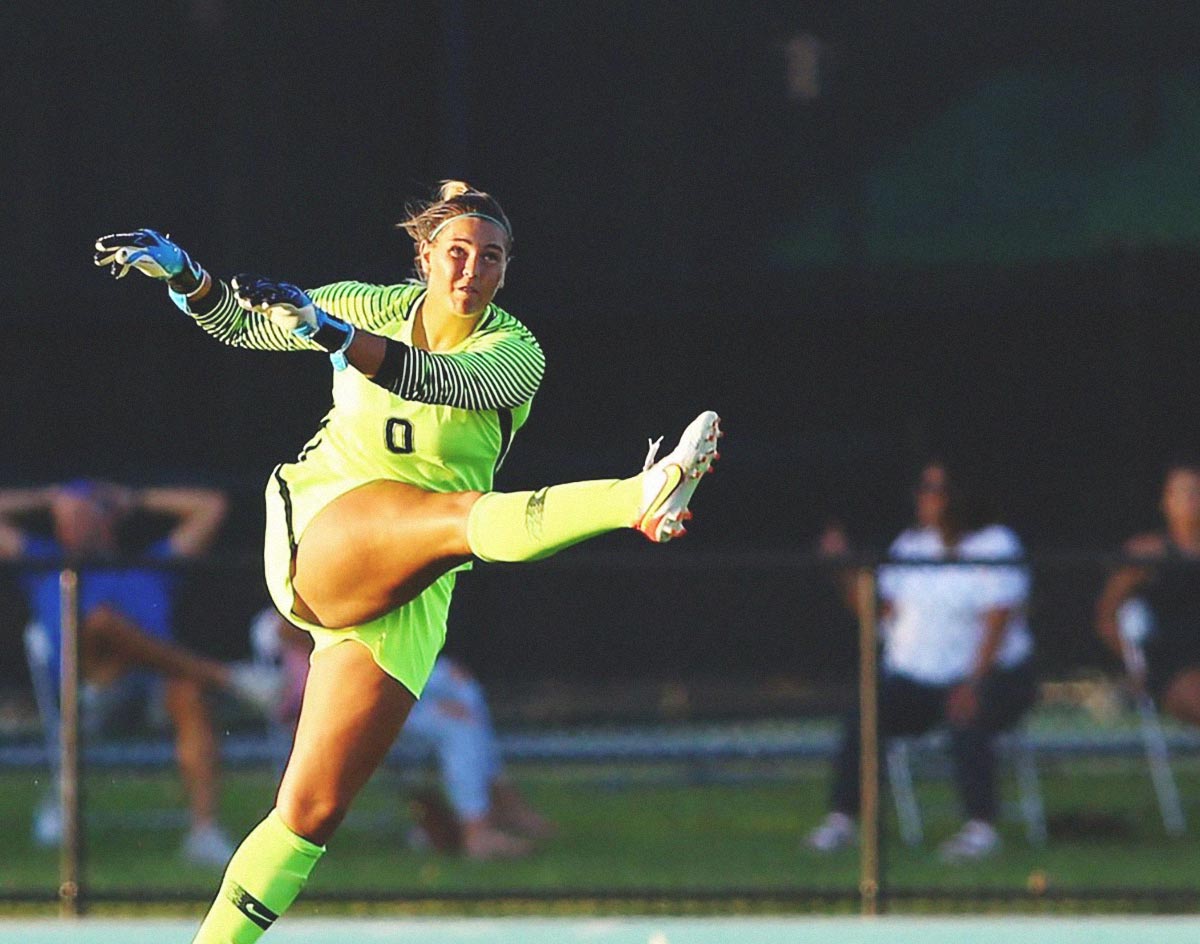 After Becoming The First Woman To Score A Point In A Power 5 College Football Game, Sarah Fuller Is Back In Her Native North Texas, Playing Goalie At UNT.

Fuller, a senior studying medicine, health and society at Vanderbilt at the time, was a goalkeeper on Vanderbilt’s women’s soccer team, where she helped lead her team to the SEC title. But when the football team’s roster of kickers were unable to play due to an outbreak of COVID-19, Fuller was called up to join the team — and she promptly swooped in, securing herself as the kicker on the team, playing in two of the team’s games.

Unsurprisingly to women everywhere, a horde of jackasses and incels — our words, not Fuller’s — quickly crawled out from the shadows in the wake of her accomplishment and in an attempt to undermine her success. Badass that she is, though, Fuller never let herself be brought down by the misogyny. Instead, just played like a girl.

Since her moment in the football spotlight, Fuller has transferred to The University of North Texas as a graduate athlete, joining the Mean Green women’s soccer team as its starting goalkeeper for her final season of collegiate athletic eligibility.

We recently caught up with Fuller over the phone to reflecting on her Vanderbilt experience, hear her thoughts on UNT so far and find out more about what her ceiling-shattering accomplishments mean for her bright future.

So, first of all: How’s you end up here? Why UNT?
I was really just trying to find a place that I could call home for the next two years [as a student] — and, really, my priority was academics. I was trying to find a school with a good hospital administration program, because that’s what I had wanted to go into. Secondly, I wanted a school with a really great soccer program that I knew I could compete in and help to elevate as well. So, when it came down to it, UNT was the best choice.

And how is UNT treating you so far? How’s your team?
I’ve been really, really happy here so far! They’ve been fantastic. I just have loved getting to know all the girls. And we’re a team of a lot of transfers, so we’ve had other experiences elsewhere, and I think coming here and just kind of uniting together and saying, “Y’know what? This year, we want to have a good year and bond as a team!” — that’s definitely shown. I’m so excited. And, especially in these past two preseason games, I think it’s clear that we have something special here. I’m really excited to get rolling into the start of the season this Friday with our season opener.

What are your expectations for the year?
Soccer-wise, I just really want to go out there every game and just really focus on that win. At the end of the season, we want to get a ring. That’s what I love about Coach John [Hedlund]. He’s very passionate about it. That’s the end goal. And then, of course, to make it to the NCAA Tournament. So I’m just taking it one day at a time, and really focusing on that. And I think the results will come.

What are some ways your life changed last year during your football career?
I’ve had a lot of amazing opportunities; getting to speak at the inauguration, getting to go to the ESPYS and, y’know, moments and opportunities that I would have never had before. I’m really thankful for that. But I don’t take this position lightly. It’s put me in the spotlight, and I want to make sure I use my influence and the decisions I make to really impact women’s sports, and show all the girls out there that it’s possible to go after these big dreams. Because there are women like me, and women who came before me, who have made it possible. And so I just want to continue growing in that space, and showing that women’s sports are really important.

Are there any lessons you learned from that experience that you’re applying now?
Just really enjoying the friendships on my team. I think that’s really important. It’s just shown me that a lot of people are like, “Oh, my gosh! I know you!” and all this stuff, but it’s so important, the people you’re really close with. I can trust them and lean on them. My teammates have just been fantastic, and I’m just so excited to go through the season with them and really be able to lean on them in any tough times. And celebrate in the great times, too!

When women excel in something that’s male-dominated, there’s inevitably bitter men who complain about it. You’ve gotten a ton of crap in online forums over the last year. How have you handled that, and how has it affected your psyche going forward?
I definitely had to learn not to read the comments! Because, if you see that every day… no human does well with these negative comments and opinions, it’s just our nature. I’ve definitely learned that [these people] are not in my situation. They’re not my shoes. Most of the time, it’s just old men that are sitting behind a keyboard. So I just remind myself of that, and that there’s bigger things out there to be upset about, to be frustrated about. I also just use that as fuel to the fire. If they’re going to be complaining about me doing this, I honestly think it just motivates me. Like, “OK, no. I want to step up and prove them wrong.” So it hasn’t been bad. It’s more just learning to adapt to not read the comments, and just keep doing my thing, because it’s gotten me this far.

So what does this all mean going forward in your soccer career?
That’s my sport. I love it, and I really want to bring attention to women’s college soccer — especially with the National Women’s Soccer League on the rise. It’s so amazing. Our first game against A&M, we had so many people out there, and I can’t tell you how many little girls came up to me and wanted a picture and an autograph. I think that’s so amazing that we continue inspiring the next generation, and really driving that women’s sports are really important. In the NCAA, there’s discriminatory issues. It’s not equal, and we can see this and we need to fix it. I mean, these are simple fixes, and I want to bring attention to it and be a voice because it gets neglected a lot.

Can you touch on some more of those discriminatory issues?
One thing is they emphasize is that, in college basketball, it’s “The Women’s Final Four” and, for men, it’s just “The Final Four.” Even like the little gift baskets we get and stuff, it’s clear that they’re trying to drive the attention towards the men’s side, when the women are just as qualified and capable of being entertaining, being good athletes, showing up and showing out. It’s little things [like that] that need to change. I mean, you can see the stats of the softball NCAA tournament — like, it blew the men’s tournament out of the water. Women’s sports are something you shouldn’t take lightly. It needs to be paid attention to, and I think there really needs to be a big investment there.

Going back to football one last time, is there anything you wish you knew then that you know now?
I think the way that I went about and everything was the way it needed to go. I went into it a little naïve to [the fact that] it would be such a big deal. Because I was just offering help! I didn’t think anything much of it. I feel like if I went in with an, “Oh, I’m about to make history!” kind of thing, it wouldn’t have put me in the right mindset to succeed — because I needed to just go in there and be an athlete. I didn’t need to go in there with the weight of the world on my shoulders. I’m satisfied with how everything went. I don’t think I would change anything.

I know you’re focused on this final year of college soccer, but what’s next? Are you hoping to go pro in soccer and play in the NWSL?
I would love to! Yes, that is definitely the next goal — especially with these expansion teams coming out of San Diego. I think that would be a really awesome opportunity. But, again, one step at a time. I really need to perform here at UNT. But, yeah, the next big goal is NWSL. For sure.

Cover photo via Sarah Fuller’s Instagram feed. This interview has been edited for length and clarity.