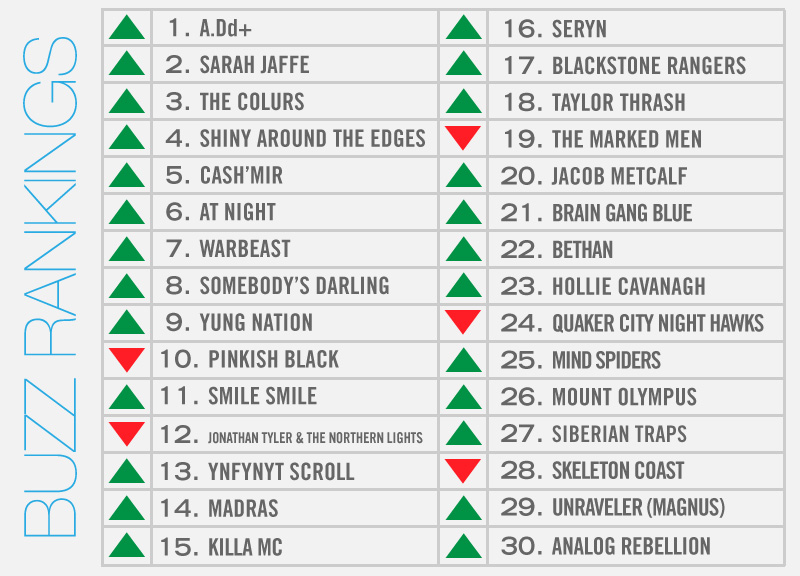 A.Dd+ Start The Year Off On A Hi Note.

We invoke King's wisdom because, of course, A.Dd+ tops this week's Buzz Rankings. It was silly of us to assume that just because the calendar recently flipped that the most buzzing local act of 2012 wouldn't continue their reign in the new year. Interestingly enough, though, the win marks the fifth for the Dallas duo.

And although their long-anticipated DiveHiFlyLo mixtape won't earn its release until later this month, one half of the duo just debuted some new material of his own. Well, sort of.

A.Dd+'s Slim Gravy was featured on the latest single, “FuhYawMean,” from Brain Gang's Cash'Mir. The duo promises a video shot at local bike shop Switching Gears is in the pipeline as well. Meanwhile the Brain Gang crew helped us Central Track folk welcome in 2013 at our Big Freedia-headlined show at Dada.

But perhaps the only New Year's Eve show with nearly as much local clout (as far as the Buzz Rankings are concerned anyway) as that Jaffe-lead Kessler bill was the big shindig over at Granada Theater. That show was headlined by former rankings-toppers Jonathan Tyler & The Northern Lights. Both opening acts (Somebody's Darling and Quaker City Night Hawks) each topped the list previously in the year. Little surprise that it took a show of this magnitude to resurrect the long absent Goaticorn.

The Night Hawks, Madras, Unraveler (which features members of defunct Fort Worth metal act Magnus), and Hollie Cavanagh all received a fair amount of love this week, too, as folks began anticipating the year's upcoming releases from locally-based artists. On that front, Warbeast, who recently toured overseas with Phil Anselmo, will play Fort Worth's Rail Club next week with the former Pantera frontman's solo project Down in support of the two acts' new split EP. Further down the line, Warbeast will release a new full-length called Destroy later this year.