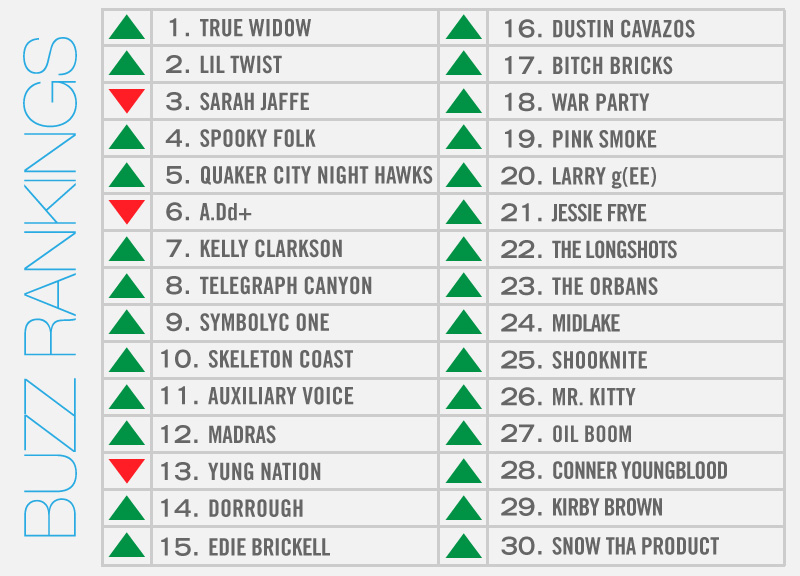 True Widow Deal Their Way To The Top.

Following in Pinkish Black's footsteps, Dallas's shoegaze trio True Widow are set to be the next heavy act from the area to make waves on the national scene — a much easier task now, considering that the band has been signed to a deal with renowned metal label Relapse Records. Like Pinkish Black, who found their way onto Pitchfork's Top 40 Metal Albums of 2012 list last year, True Widow are also in the process of recording a new full-length with Centro-matic's Matt Pence at the Echo Lab in Argyle.

This pretty killer accolade helped the band ascend to the top of our weekly Buzz Rankings for the first time, although we anticipate it will be just the first in what is sure to be a long list of honors that will be heaped upon the band in the coming year. We also predict that their upcoming January 26 gig at Rubber Gloves will be absolutely packed. But that one's kind of a no-brainer.

Just behind the doomgaze wizards in our rankings this week is one of the most talked-about musicians in the entire country. It's been that way for the past week-and-a-half, too. Now forever known as the rapper responsible for corrupting the squeaky clean Justin Bieber, stories on Dallas native Lil Twist have been on national television and print outlets like crazy of late. Sources like E!and TMZ just can't get enough of the 19-year-old rapper who they've called out in the past week for making Bieber drink champagne and smoke pot.

Really, though, it's just been a hell of a week in local music. In a normal week, a story like the one that came out earlier in the week in which it was revealed that Sarah Jaffe inspired a new Pixar short would've made the local songstress the clear choice as the top buzzing act in town. Similarly, news of Edie Brickell's new collaborative record with noted funnyman/banjo-picker Steve Martin would've made a much bigger impact in local music headlines had it come out at another time.

Alas, such was the week we faced, as a number of locally based entities got their SXSW invites this week, too. Acts like Dorrough, Quaker City Night Hawks, Skeleton Coast and The Longshots were all added to the growing roster of this year's SXSW confirms today.

Meanwhile, Spooky Folk and Pink Smoke received some shine this week from their upcoming releases, and the aforementioned Longshots, War Party and Bitch Bricks were among the dozen Fort Worth bands revealed to be on that new Dreamy Soundz/Lo-Life compilation Group Therapy, Vol. 1 that keeps getting a bunch of attention around town.