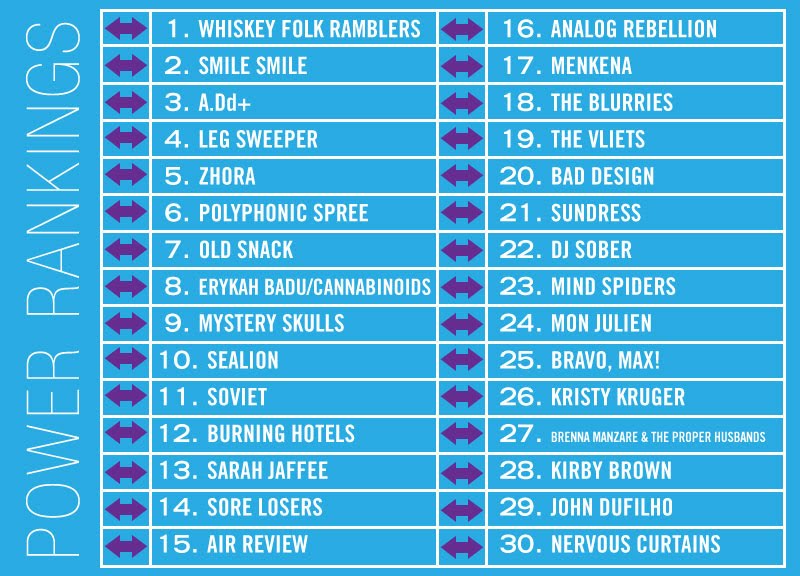 Who's The Hottest Act In Town This Week?

Let's not kid ourselves: Local music may not technically be a “competition,” per se, but people sure do treat it like it is one. There's a reason why every time a North Texas band starts to do well for itself, there's a backlash, folks. No one wants to give the most successful bands in town their proper credit — perhaps out of the fear that doing so will just leave the other bands in the regional mix in the dust.

We're not here to get into the psychological reasons behind this phenomenon, no. But we do think that it's time that the bands doing well around town at any given time are offered the shine they deserve.

Which brings us to this new recurring Central Track feature, Buzz Rankings, wherein we'll take a survey of the local scene each week and try to determine which bands in town are really putting in work and seeing it pay off. Each week, three Central Track music writers — Cory Graves, Blake Panter and I — will take a long, hard look at the local scene to see which bands have the most intriguing shows coming up, which bands are getting the most press around town (at the Observer, at Pegasus News, at D Magazine's FrontRow blog and at other outlets) and which bands have accomplished the most notable feats of note, and then we'll individually rank our top 30 bands in town. Our lists will then be weighted based on their ordering of bands and compiled into a master list to be revealed in this here space.

Given that this is our debut unveiling, you won't see any change in the standings, but, in subsequent weeks, you'll be able to see which bands are trending upward, which are trending downward and so on and so forth.

This week's rankings appear particularly weight with notable feats: Whiskey Folk Ramblers were featured on popular Internet stop Daytrotter earlier this month; Smile Smile saw its song “Tempo Bledsoe” featured in a Reese's Valentine's Day ad; the Polyphonic Spree released a new single; Bad Design released a new album; Zhora made their live debut at La Grange; Erykah Badu and The Cannabinoids continued to tour the world and even performed a pre-Grammy set in L.A.; Leg Sweeper covered Houston favorite Bun B in an incredibly viral 35 Denton video; A.Dd+ actually hit the road with Bun B (plus Paul Wall and others), while also announcing an upcoming tour with Black Milk; Sore Losers released a new album; Sarah Jaffe, John Dufilho announced new albums; and Menkena just got home from a tour in support of Concrete Blonde.

Meanwhile, other bands, such as Air Review, Burning Hotels, Old Snack, Sealion, Soviet and Sundress, are still riding high off of their monster years in 2011.

How will each of these bands fare next week and in the weeks that follow? Tough to say. But we sure look forward to seeing how this thing plays out.