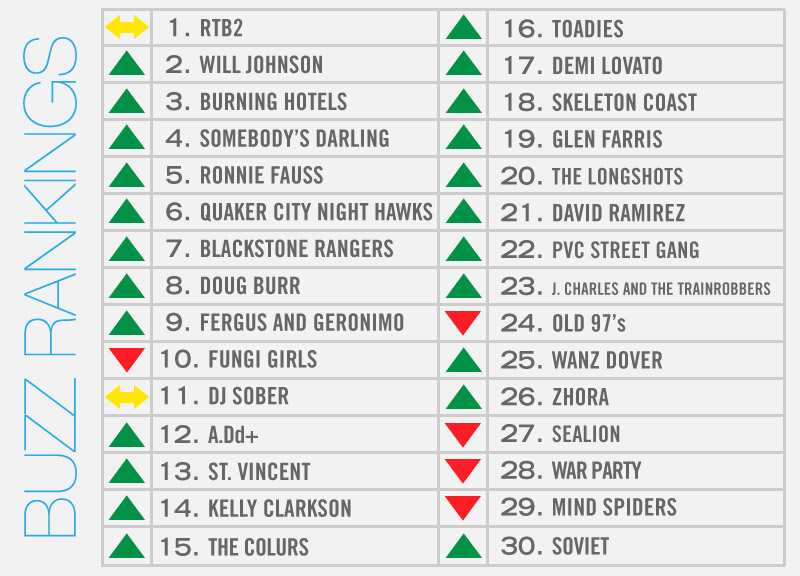 RTB2 Is Twice As Nice This Week.

Forget the three release shows in Fort Worth, Dallas and Denton for their LP 2. RTB2's Hendrix-like delivery of the national anthem to open last Saturday's Hot Wet Mess festival was enough to solidify Ryan Thomas Becker's place as North Texas' go-to guitar hero at the moment — even if their album, the duo's first full-length in five years, wasn't getting such rave reviews in every publication in town and they didn't have more shows around town in the coming week.

Becker's local music doppelganger, coincidentally enough, follows him in the No. 2 slot in this week's rankings. Next Tuesday, Centro-matic frontman Will Johnson will end a lengthy drought of his own when he releases the full-length, Scorpions. Although he's put out discs with Centro-matic and supergroups like New Multitudes recently, his latest effort marks his first solo record since 2007. Further adding to his heap of buzz this week is the revelation from a recent DC9 interview that Centro-matic, too, will be heading back into the studio this December to begin work on their latest record.

In the meantime, though, the next biggest local release this week behind RTB2's come from alt-country outfit Somebody's Darling, whose sophomore effort Jank City Shakedown, has been getting plenty of press of its own. The band is currently building some buzz outside of the Metroplex while on a 19-day tour. In the meantime, they've announced a big homecoming release show on October 6 at Dada.

Several other noteworthy releases this week helped a handful of other artists buzz this week as well. Ronnie Fauss announced a release date for his new album, I Am The Man You Know I'm Not, his first since signing with New West Records. That will come in October as well. The Colurs released a four-song pay-what-you-want EP as well. Oh, and St. Vincent, whose collaboration with David Byrne drops next week, had her album previewed in its entirety by Nation Public Radio.

Not to be forgotten, though, are acts like Burning Hotels, Zhora, J. Charles and the Trainrobbers, Blackstone Rangers and The Birds of Night, all of whom are taking part in this weekend's much-anticipated Untapped Festival.

Speaking of festivals, we'd be remiss not to mention The Toadies' fifth annual Dia de los Toadies festival this past weekend, in which local artists like The Phuss and The King Bucks helped entertain the thousands of Toadies fans who made the trek to New Braunfels.