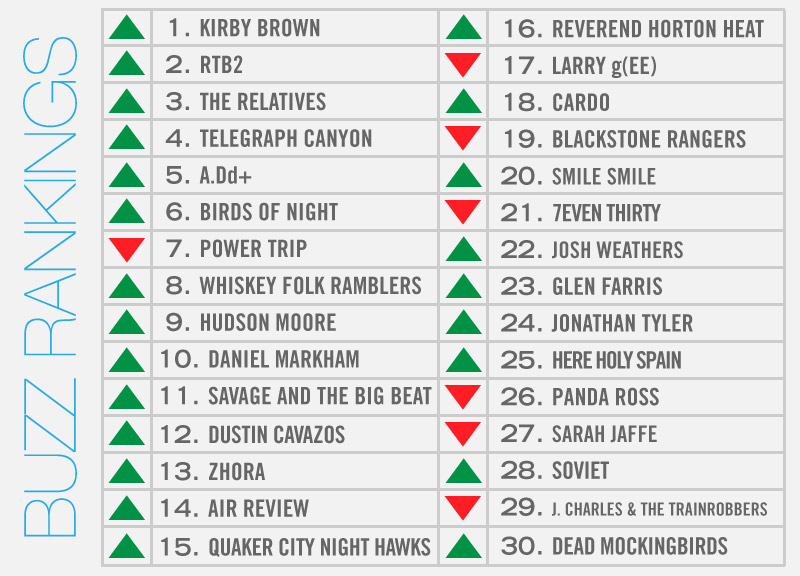 Last Saturday night was as busy a night — at least musically speaking — as Dallas had seen in some time.

Over at Gexa Energy Pavilion, dozens of punk bands performed throughout the day on multiple stages as part of the Riot Fest tour. Meanwhile, in Uptown, several local groups performed on two stages in West Village as part of the Art Uprising event. The Double Wide hosted an official Riot Fest after-party, too, featuring bands like Here Holy Spain and The Dangits.

And while all this was going another memorable event was underway in Deep Ellum. Over at the Prophet Bar, a bittersweet affair was taking place — and it might have been the most memorable of the evening's proceedings.

While Larry g(EE), the very underrated frontman of perhaps Dallas' best live outfit, was celebrating his birthday with his band's performance, headliner Kirby Brown was marking his final local performance for the time being. Despite stiff competition from other nearby venues, a packed house turned out to see Brown, who is preparing to relocate to New York for an undetermined stint in the coming weeks. Fort Worth standouts the Quaker City Night Hawks caught some shine for their participation in this bill as well.

Following close behind in this week's rankings are Denton duo RTB2, who are just a couple weeks removed from their first time topping the rankings. Closely behind them were fellow former No. 1's The Relatives and Telegraph Canyon, who are taking part in this weekend's Fort Worth Music Festival. Air Review, The Cush, Whiskey Folk Ramblers, Reverend Horton Heat and Hudson Moore are other locals playing the bill who received votes in this week's list.

In the No. 5 hole are frequent list-toppers A.Dd+, who, aside from joining the Index Festival's bill fairly recently, also hinted on Twitter this week that their Dive Hi Fly Lo mixtape will be coming shortly.

Interestingly, all four of the bands following Brown on this week's rankings had previously topped this weekly chart at some point this year.

Somewhat surprisingly, newcomers The Birds of Night ranked particularly highly this week as well. Aside from taking part in the recent Untapped Festival and announcing a handful of new local dates, the group was mentioned in the Dallas Observer alongside Daniel Markham, Savage and the Big Beat, Goblins, and Blessin' as “five Denton bands you should get to know.”