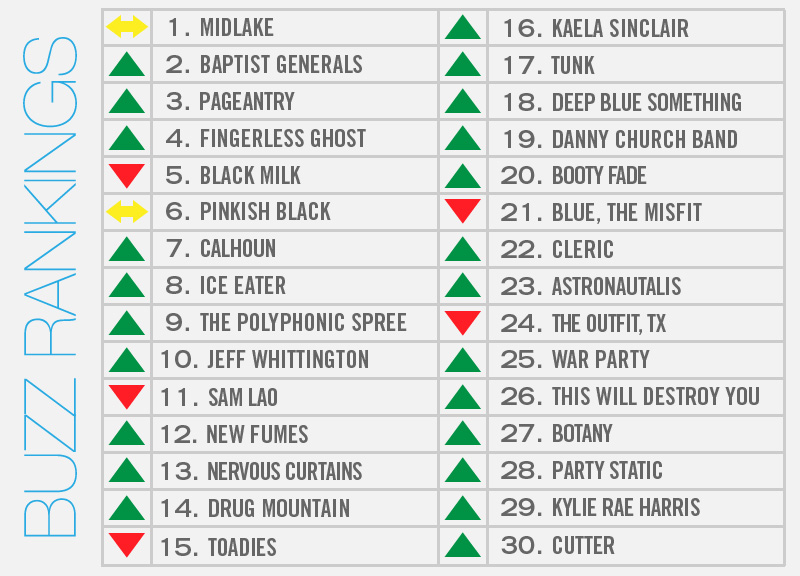 This Week, Midlake Was Twice as Nice.

Just like as they did last week, the Denton-dwelling heroes in Midlake find themselves atop the local music Buzz Rankings once again this week.

There's reason, of course: The band, just back from a West Coast jaunt headlined back-to-back nights at Dan's Silverleaf in Denton this week, performing to packed houses both nights.

In a little over a month, the band will release its fourth studio album, embark on an east coast tour and even open for Pearl Jam on a pair of stops. It's no wonder, then, that Midlake finds itself currently positioned as the most nationally-adored local outfit of late.

The power of the band's influence also helped fellow Dentonites Pageantry and Doug Burr to show up in this week's list as well. In the case of the former, word of a recently-recorded Daytrotter session gave Pageantry a little added shine.

Finishing a close second to Midlake this week is the band's fellow Denton-dwelling outfit, Baptist Generals, which is gearing up for a pretty big opening gig of its own this week. On Saturday night, the band will share a bill with Austin lo-fi legend Daniel Johnston at the Kessler. The band will also pull double duty that night, acting as Johnston's backing band. Also helping the band rank so highly? News that head General and 35 Denton creative director Chris Flemmons would put the festival on hold in the upcoming year in order to retool the thing in time for a proper comeback in 2015.

Moving on, the new-look Big Tex was revealed this afternoon, a day ahead of tomorrow's planned unveiling. Fortunately for Fingerless Ghost, the unofficial Big Tex welcome back party that the band's headlining tomorrow night at Sons of Hermann Hall will go on as planned. The band will have copies of its new single, which coincidentally, was written in memoriam of the prior Big Tex's fiery end, at this show.

Likewise, Cutter, War Party, Party Static and Kaela Sinclair each also caught some buzz for their recent releases this week.

Elsewhere, Calhoun received some MTV love , Deep Blue Something announced a reunion for later this year, Black Milk packed Dada during his first local performance since moving to town, and Pinkish Black and Cleric each celebrated recent album releases.