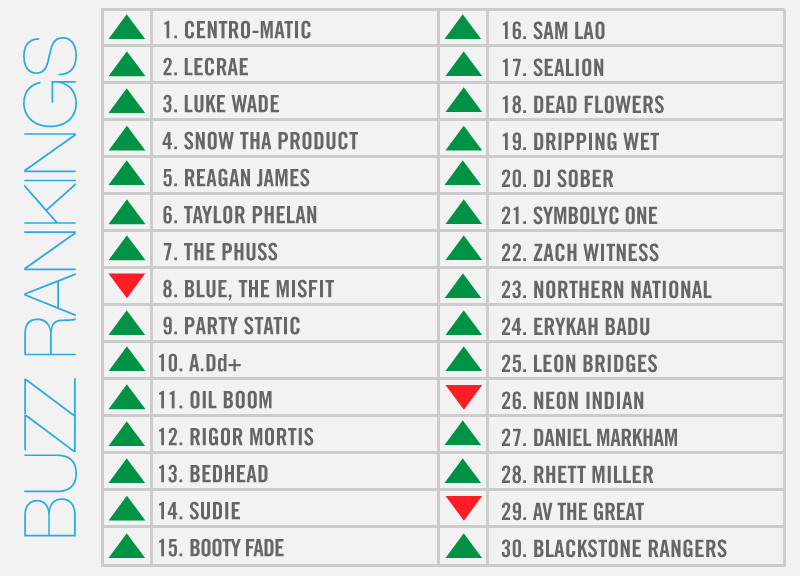 This Week, Centro-matic Got Ready For The Shutdown.

So it was no wonder, really, that when Centro-matic's Will Johnson published an entry on his band's website indicating that its upcoming December tour would be its last, that particular bit of news spread like wildfire this week.

The biggest bummer for locals just now finding out about the news, though, is the fact that Centro-matic's final two shows, both of which will take place at Denton's Dan Silverleaf venue, are already sold out.

At least, after 19 years together, the band can still say it went out on its own terms, arguably still at the top of its game and with at least one week spent atop our weekly local music power rankings.

On the other hand, a bunch of other local music careers really started taking off this week. Chiefly among them was Christian rapper Lecrae, whose new LP is currently the No. 1 album in the country. Period. It was a big week for the rapper, too, with appearances on such television shows at The Tonight Show and feature articles from the likes of Grantland, among others.

Television was a big player in determining this week's rankings, to be sure: A trio of North Texans each turned in successful auditions on The Voice, with Fort Worth's Luke Wade and Dallas' Taylor Phelan both joining Team Pharrell and Burelson's Reagan James teaming up with Blake Shelton. For what it's worth, Pharrell assured James at one point that he'd be trying to steal her away as well. The appearance paid off for Wade, in particular, who was featured on the LA Times and People Magazine sites among others.

Then there was Snow tha Product, who out will join the likes of Wiz Khalifa, Juicy J, Ty Dolla Sign and so many others in this year's cipher at the 2014 BET Hip-Hop Awards, which will air on October 14.

Over on the smaller screen, A.Dd+ released a new song/video where they appear alongside Kool Keith.

Elsewhere: Blue, the Misfit's Child in the Wild album was named the Best Local Music Release of 2014 in the Observer's Best of Dallas issue and DJ Sober earned the publication's Best Club DJ honor; Rigor Mortis will release its first new album since 1991 this weekend with a show at the Curtain Club; Booty Fade and Zach Witness will perform at this weekend's Pop That! dance party at Sons of Hermann Hall; and damn near everybody else on the list will perform at this weekend's Index Festival in Deep Ellum.