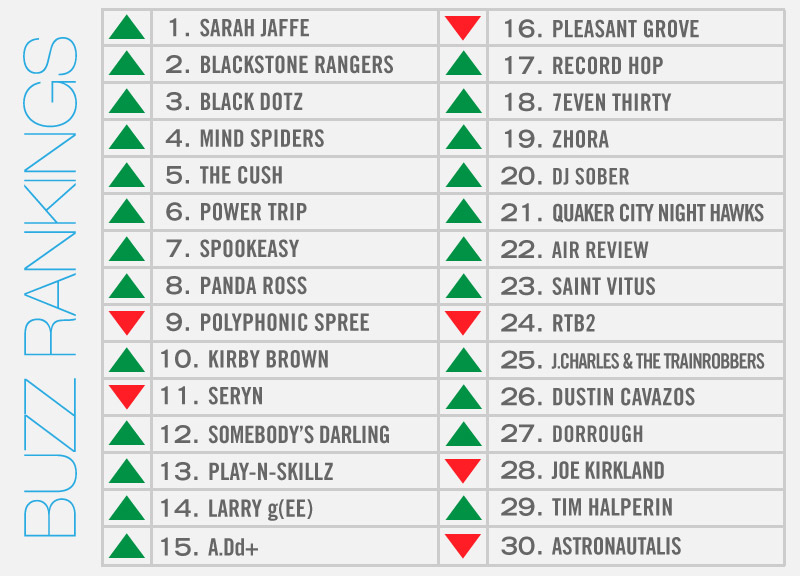 Each week, we take a survey of the local music scene each and try to determine which bands in town are really putting in work and seeing it pay off. Which bands have the most intriguing shows coming up? Which bands are getting the most press around town? Which bands have accomplished the most notable feats of late? Based off these criteria, three of our music writers submit a list to be weighted and compiled into a master list to be revealed in this here space. We like to think it's fairly revealing.

If we're viewing the local music scene through the eyes of our sister column — y'know, the one that tries to gauge whether things are looking up or down for the City of Dallas each week by assigning arbitrary point values to various current events — then we would have to say that this was a pretty down week indeed.

One indicator of this fact is the sheer number of bands that received votes this week. With 65 total bands receiving at least one vote by a member of our three-man panel, it's apparent there were very few clear-cut buzzing act this week.

Still, a few did manage to stand out above the rest.

Sarah Jaffe, for instance, not only helped to christen the city's brand new Dallas City Performance Hall venue this week, but she had the top local release of the year according to the reader's poll in this year's Dallas Observer “best-of” issue. That feat also helped Jaffe land atop the buzz rankings for a record-setting fifth time.

That same Dallas Observer issue also honored Black Dotz and Mind Spiders (numbers three and four in this week's rankings) as the best band in Dallas and the band with the best local album release, respectively

But, with such a down week behind us, everyone, it seems, is looking forward to upcoming festival shows. This weekend's two-day Art Uprising at West Village will feature performances from 50 local bands over the course of Friday and Saturday afternoons, including vote-receivers the Quaker City Night Hawks, The Hanna Barbarians, The Roomsounds, Whiskey Folk Ramblers, Bravo, Max!, Sealion, Zhora, Bethan and The O's.

Even more anticipated, perhaps, is the two-day Index Festival at Trees on October 5th and 6th. Along with the all the top notch national talent like Portugal. The Man, Grimes, and Cold War Kids, the full lineup that was released earlier this afternoon featured several local additions as well. Among them were vote-getters Bethan, Blackstone Rangers, Burning Hotels, Datahowler, A.Dd+, DJ Sober, The Angelus and Low Dark Hills.

Beyond that, television played a big part in helping to add some shine to several local acts. Chiefly among them was Dallas barista Panda Ross who thrilled judges Demi Lovato and Britney Spears on last night's episode of The X Factor before leaving in an ambulance. Tim Halperin, Brandon Hassan and Pentatonix were all featured on national television outlets this week as well.