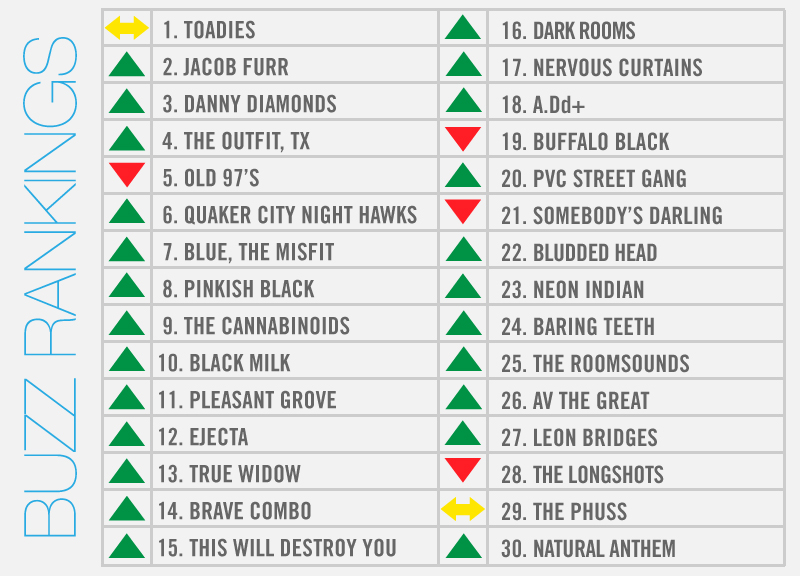 This Week, The Toadies Were Treated Well.

We made up our minds. And we decided that, for the second straight week, the Toadies were the buzzing-est band in town.

This comes after the band's headlining set at last weekend's Dia de los Toadies fest, which also served as the last time the band will perform Rubberneck front to back in town this year, and quite possibly ever.

If indeed that does turn out to be the case, then what a way to go out: The seventh annual Dia once again proved to be a terrific time. And it was enough not only to earn the Toadies its sixth-ever No. 1 in our weekly local music power rankings, but it also helped earn spots in the list for the Old 97's, The Longshots, Quaker City Night Hawks, Somebody's Darling and Pleasant Grove, as well.

But let's not give all the credit to the Toadies here. The Night Hawks also got featured on a nationally-released Bruce Springsteen tribute disc that earned its release this week, Somebody's Darling officially released its third full-length this week and the Old 97's played a secret show at Twilite Lounge on Thursday in honor of frontman Rhett Miller's birthday.

Elsewhere: Ejecta performed at GvsB IV at the Granada; Brave Combo and Neon Indian are but a few of this week's list-makers that'll perform at this weekend's upcoming Oaktopia Fest in Denton; and Jacob Furr and Danny Diamonds each received multiple write-ups in area publications thanks to their respective upcoming releases.