This Week, Erykah Badu Was A Legend.

Last night was a pretty big one for Erykah Badu.

Not only did she pop up for a surprise performance of “Tyrone” and “On & On” at Puff Daddy’s Bad Boy reunion show at the American Airlines Center, but Comedy Central also premiered Legends of Chamberlain Heights. And, as you may recall, that’s the program on which she’s serving as the music supervisor.

Those items would make for a big week for just about anyone. And yet, for Badu, it was just another night.

That kind of brilliant nonchalance is what sends her to the top of this list for the astounding 19th time since we started doing these weekly, local music power rankings. Yes, the Queen reigns again, folks.

Leon, of course, is coming home this weekend to headline the Music Hall at Fair Park as part of the last tour in support of his debut LP. Other big shows this week include(d) Demi Lovato and Nick Jonas over at the AAC, Ishi’s big album release party at Trees, Charley Crockett’s Beats and Eats thing at Granada and Paul Cauthen’s opening turn for Ryan Bingham at South Side Ballroom. Cauthen, who has a record about to drop via Lightning Rod, will have a little listening party for that sucker over at the Belmont, too.

On top of that, acts like Lower Dens, Buffalo Black, Mur and Buffalo Ruckus all released new music, too. In Buffalo Ruckus’ case, theirs also includes a new namesake beer. And not to be forgotten, Kacey Musgraves announced a star-studded Christmas album due out in a few weeks. 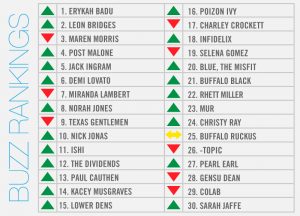