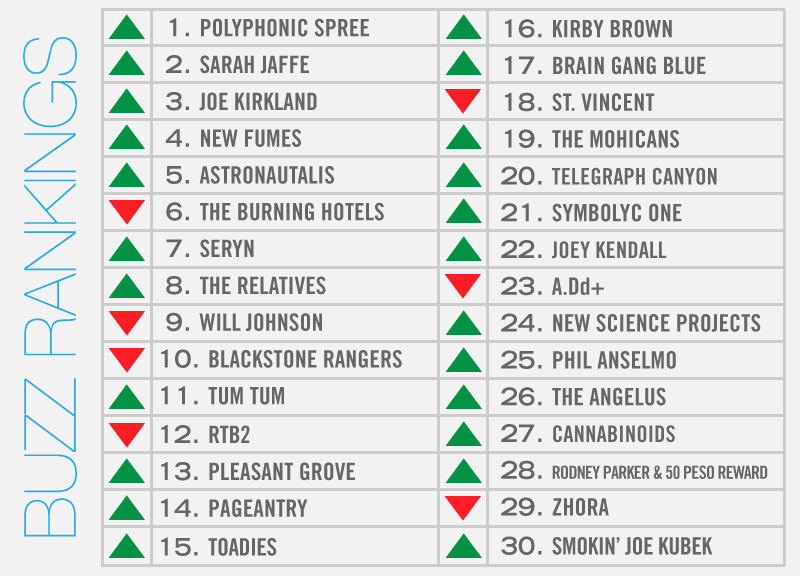 Polyphonic Spree Crowds Everyone Out Of The Number One Spot.

All told, it was a pretty good week for Dallas' sacred cows.

It's tough to say if being less than two weeks removed from the Toadies' fifth annual Dia de los Toadies festival has had any lasting impact, but the nostalgia factor remained high this week.

Case in point: In a heavily contested week here in buzz land, Polyphonic Spree find themselves atop the rankings, surprisingly enough, for the first time ever. The city has been anticipating the opening of that deck park above the Woodall Rogers Freeway for so long, any announcement involving the park's upcoming opening celebration will be considered huge.

When the Klyde Warren Park opens in October, they will mark the occasion with performances by Polyphonic Spree and Trombone Shorty. Around that same, the Spree will release Holidaydream to mark the 10th anniversary of their Holiday Extravaganza.

Other Dallas stalwarts had their share of press this week, too, like former Pantera frontman Phil Anselmo, who is performing in town this week with his new outfit Down, and late '90s alt-rock upstarts Pleasant Grove (along with Seryn and gospel legends The Relatives), who will offer up one of the first performances at the brand new Dallas City Performance Hall.

But Pleasant Grove won't be the first performance at the venue. That honor, of course, goes to Sarah Jaffe, who inaugurates the beautiful new space tomorrow night. Speaking of Jaffe: Erykah Badu's live production collective, The Cannabinoids, helped her receive some more national press for her most recent album by premiering a new remix of the single “Glorified High” on Prefix Magazine's site this week.

And while he might not have finished in the top 30, Dallas staples, The Reverend Horton Heat, who is celebrating his 25th anniversary with a retrospective CD/DVD and concert, found himself receiving votes this week as well.

Lastly, in a case of yet another North Texan making an appearance on a nationally televised singing competition, Joe Kirkland, the “gritty” frontman of local mall punk outfit Artist Vs. Poet, got major attention this week when he made the cut during the blind auditions for the third season of The Voice, where he'll be a part of “team Adam” going forward.