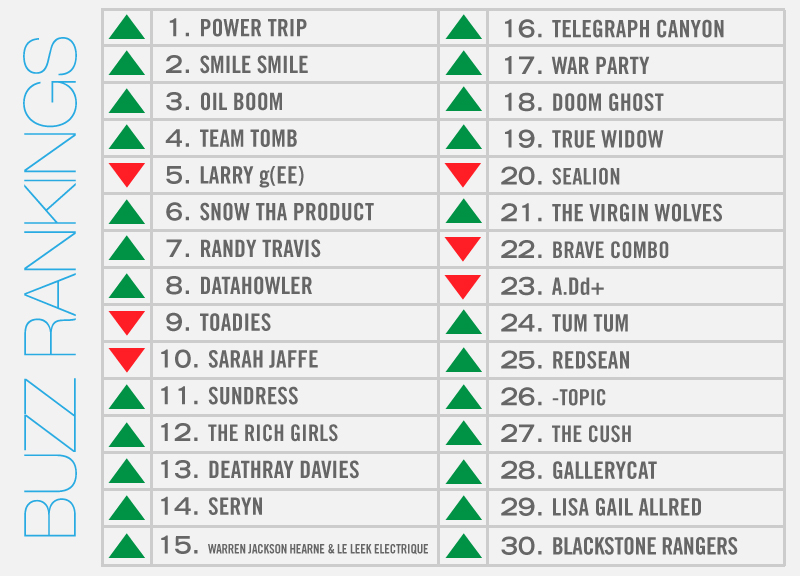 After A Hardcore Week, Power Trip Leaves Town On Top.

Each week, we take a survey of the local music scene each and try to determine which bands in town are really putting in work and seeing it pay off. Which bands have the most intriguing shows coming up? Which bands are getting the most press around town (at the Observer, at the Dallas Morning News, at D Magazine's FrontRow blog and at various other outlets)? Which bands have accomplished the most notable feats of late? Based off these criteria, three of our music writers submit a list to be weighted and compiled into a master list to be revealed in this here space.

As up-and-coming Dallas hardcore heroes Power Trip prepared to leave town for their biggest tour to date — a month-long stint that will eventually find them opening for punk supergroup OFF! — they made sure to leave their local fans with plenty to talk about before they play in town again on September 19 at Trees.

Their rowdy sendoff show, a somewhat secret affair, drew over a hundred fans to Good Records, where the band proceeded to tear the roof (almost literally) off the Lower Greenville record shop.

Whether or not the recent Southern Lord signees are ever allowed to play Good Records again (we imagine the chances of that are slim to none), their raucous antics, it's safe to say, will be talked about for years.

Close behind Power Trip in buzz this week are Smile Smile, who have topped the list themselves a couple of times in the last few weeks, and whose release show for their sophomore album Marry a Stranger is finally upon us this Saturday at the Granada Theater.

Meanwhile, Oil Boom, who were added earlier this week as a last minute replacement to play our yacht rock-themed six-month anniversary party this Sunday at Dada, had plenty of people talking about them this week as well — well, in our offices anyway. Throwback soul man Larry g(EE) and Hall and Oates cover band The Rich Girls, who will also be performing at the free party, also find themselves with respectable spots in this week's rankings as well.

There was no question that Snow tha Product earned her spot in the Top 10 this week after the Fort Worth emcee earned a front page feature in the Star-Telegram's DFW imprint.

The title of that article, after all, was “Snow tha Product Creates a Flury of Buzz.”

Telegraph Canyon and Datahowler, meanwhile, were added to the upcoming two-day Index Festival at Trees, which, by our estimation, has been the most buzzed about upcoming music festival on the horizon. Datahowler was also the featured artist on the popular Denton-based website Violitionist this week, which was later gushed about in the Dallas Observer's DC9 at Night blog.

Speaking of the Observer: That publication returned their attention to local music coverage in this week's print edition with a full-page feature on Warren Jackson Hearne and Le Leek Electrique, who finally have a debut full-length under their belts.

And because not everyone who is buzzed is buzzed about for positive or even serious reasons, you'll notice Lisa Gail Allred making the list once again, now that her second (and this time intentional) attempt at viral video fame has gone live.

Called “Coffee or Tea,” it doesn't look as if the new clip will create the sensation that her “Three Second Rule” did a few months back. But, hey, she's trying.

On the other hand, Randy Travis could try a little harder. The country singer made national headlines this week after his second alcohol-related arrest in the past six months. This time, however, he was found naked behind the wheel.