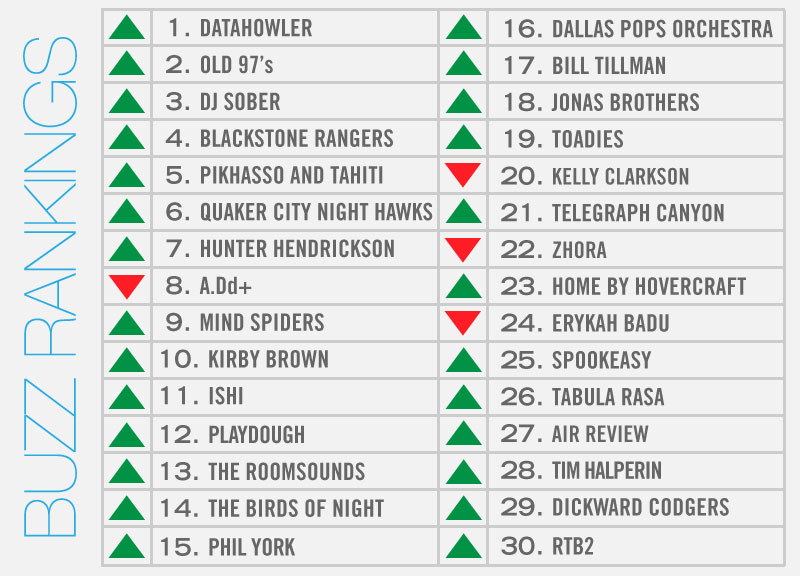 This weekend, local arts nonprofit Art Conspiracy will be holding its annual seed event to raise the funds necessary to hold their eighth annual event.

And, as we previewed this morning, Datahowler's participation in this Saturday's RZN8 event should be an extra special one.

Not only will he be unveiling his new live projection setup — a sort of pyramid of cubes whose sides feature separate projections that are manipulated live — Datahowler will also be previewing some new tunes from his upcoming release Crystal Gazers at the event.

That kind of unveiling, it shouldn't surprise, helped Datahowler shoot to the top of this week's buzz rankings.

But Datahowler's performance in the lounge area at Life in Deep Ellum represents just one of the acts performing at RZN8. Spookeasy, Kirby Brown and Home by Hovercraft are also taking part in this weekend's event, which helps them land on our list this week, too. Of course, this show represents just one of the big shows going down in the coming weeks that are being anticipated rather highly.

35 Denton's fall event Hot Wet Mess and the Toadies' fifth annual Dia de los Toadies festival both go down next weekend, helping the likes of RTB2 and the Toadies in this week's rankings. Also working in RTB2's favor is a rather highly anticipated LP being released next weekend. For months, the band's new-ish, slightly more angular direction has been a frequent discussion topic among loyalists.

And their Dallas release show at The Double Wide the night before Hot Wet Mess is set to feature Sealion and War Party, who are calling the show their tour kickoff show. Coincidentally, their first night on tour takes them all the way to Denton where they'll be playing the official Hot Wet Mess after-party at Rubber Gloves along with Fungi Girls and Doom Ghost.

Speaking of the Double Wide: That Blackstone Rangers and Zhora bill there this past weekend may have something to do with those bands making the rankings once again this week. Not only do both electronic-based acts feature frequent female vocals and live drummers, but both have been heavily promoting upcoming shows this week. Blackstone Rangers are on a pair of bills at Lola's and La Grange next weekend, and Zhora was recently added to the long-buzzing Untapped bill, which proved so popular it outgrew its original venue.

Other gigs of note that have been buzzed about by local music fans and members of the press alike include the Old 97's 15th anniversary show on Friday at House of Blues, the upcoming Dallas Pops Orchestra's Legend of Zelda concert, a string of local dates for Ishi leading up to the release of their sophomore album next month, and DJ Sober, who recently added DJ-ing Dirk Nowitzki's wedding reception to his list of high-profile gigs.